The Dhaulagiri circuit is a difficult trek in the slopes of the magnificent Dhaulagiri peak, which, at a staggering height of 8167 meters, is the 7th highest mountain peak in the world. Beautiful view of Mount Dhaulagiri Prayer flags at Dhaulagiri Base Camp A group of trekkers and Sherpas passing through the French Pass Mt. Dhaulagiri - Sunrise ... 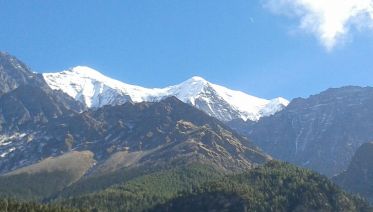 20 day trekking trip through Beni, Babiya Chour, Dharapani and 15 other destinations in Nepal. Read More
days20 From US$ 3,300 View Tour
Next Departures
Showing 1 - 1 of 1 results
No results for your search criteria
Try clearing your filters to get more results
Create your custom-made trip to Nepal

The Dhaulagiri circuit is a difficult trek in the slopes of the magnificent Dhaulagiri peak, which, at a staggering height of 8167 meters, is the 7th highest mountain peak in the world.

This Dhaulagiri trek is a camping trek and it’s for experienced hikers who love pristine mountain terrain. The Dhaulagiri circuit trek encompasses a variety of extremely beautiful Himalayan terrain.

Starting at Beni, the trek follows the Myagdi Khola river (originating from Mt. Dhaulagiri) while passing beautiful Magar villages along the way. The first few days are the easiest. Trekkers pass through lush paddy fields while getting a splendid view of the Mt. Dhaulagiri and Annapurna mountains. This is completely different terrain from the moraines and glaciers that they will get to see just a few days later. Having passed the relatively low altitude rice terraces, and having climbed for several days, trekkers then pass the Chonbarden gorge to finally reach the Dhaulagiri Base Camp (4,750 m).

The next day is the most difficult and thrilling one on the entire trek. Trekkers now have a grueling climb through the French Pass ahead of them. The French Pass, at an altitude of 5,360 m, leads to the Hidden Valley, a splendid valley with numerous camping spots and beautiful views of the surrounding mountains.

It’s recommended to only attempt this trek from late September to October, or April to early June, when the trails are relatively snow-free. No technical climbing skills or special equipment is needed to do this trek. Nevertheless, it is a must to be physically fit.