Supporting Ukraine together. Check our homepage for further details.
SUPER SALESSAVE UP TO $1300
UP TO 62%OFF
SEE ALL DEALS
LIMITED OFFER ends in:
Home   ›   USA Tours   ›   USA Travel Guide   ›   12 Things to do in the USA
Tweet

From the freezing north of Alaska to the tropical south of Florida, the vast and varied land called America has everything. Boasting endless wildernesses, mighty mountain ranges, barren deserts, great cosmopolitan cities, entertainment, film, sports, culture and cuisine, no other country can offer such a staggering array of attractions. Whatever it is you seek, whether you hope to rub shoulders with stars, travel back in history or lose yourself in the immensity of nature, you are sure to find a wealth of things to do in the USA.

If you want to take the road less traveled, getting behind the wheel can be the perfect way to explore a country and few places are more suited to this kind of adventure than America. One of the best road trips in the country is US Route 66. The stuff of folklore and legend, the route takes you from Chicago in the Midwest right through the heart of the country to the coast of Southern California. Follow in the footsteps of the early explorers and release your inner pioneer spirit as you traverse the US on America’s most iconic drive.

Best time: April to early July and September to late October is the best period for a road trip in the USA. The temperatures are neither too hot nor too cold and the roads are not overcrowded.

Tours and Holidays in USA
Previous Next
View all USA Tours

With a huge range of national parks and wilderness areas for you to explore, nature lovers are spoiled for choice, making hiking one of the best things to do in America. The Grand Canyon is quite simply one of the planet’s most breathtaking natural wonders, and taking a hike along one of its many rewarding trails is one of the must-do activities when in the country. There are routes of varying lengths, from under an hour to upwards of a week and more, all of which will allow you to experience this awe-inspiring landscape up close and personal. So strap on your backpack, lace up your boots and head for the great outdoors!

Best time: Head to the Grand Canyon from March to June or September to November when the weather is neither too hot nor too cold. July and August are very busy but still stunning. For Zion National Park, April to May and September to October offers pleasantly warm weather. Visit Glacier National Park in April and October when temperatures are not too cold, and the park is not overcrowded like in the summer months.

The US has more than its fair share of bucket-list tourist attractions, and any trip there is the perfect chance to tick off as many of them as possible.

Best time: Although any time of the year is fine to visit these tourist hot-spots, March to June and September to November give a combination of pleasant weather and fewer crowds in Washington and New York.

If you do one thing in the USA, let it be visiting Niagara Falls. Head to the Canadian border in New York state to marvel at the titanic force of one of the world’s most impressive waterfalls. Marvel at it from the observation decks or take a boat tour for a more powerful impression. Whatever you do, keep your raincoats on at all times! Besides this natural phenomenon in New York, the USA also boasts towering mountain ranges, great rivers, endless plains, and arid deserts, offering multiple opportunities to witness untamed nature at its most spectacular.

Best time: The peak season to visit Niagara Falls is June to August but this is also when the weather is best. To avoid the crowds, visit later in the year, but expect lower temperatures. Go to Grand Prismatic Spring from May to September to witness the colors at their most vivid. The best times to visit Hawaii Volcanoes National Park are April to early June and September to October. However, it is busier for a week around the end of April and the start of May due to a Japanese national holiday at that time.

American cuisine is often derided as being little more than hamburgers, pizza, and junk food, but there’s so much more to it than that, and a trip to the US can be a culinary adventure to convert even the most skeptical. This makes tasting the food one of the most important activities in the USA.

The US might be a young country, but with several hundred years of colorful modern history along with a plethora of world-class museums, the options for those in search of a cultural fix are almost limitless. The Metropolitan Museum of Art, popularly known as the Met, is spread over three New York locations and boasts over two million works. It contains significant collections from around the globe and down the ages and is also arguably the world’s most important repository of American art. Some other places to witness artistic flairs in the US are below.

Other art and history sights:

Best time: Visiting museums can be done year-round, making them good options if you are visiting the US during periods that are unfavorable for other more seasonal attractions.

Americans love their beaches, and unsurprisingly for a country with such an extensive coastline, the US boasts its fair share of options if sun, sand, and sea are your thing.

Best time: Visit South Beach from March to May for pleasant weather, fewer crowds, and lower rates. Weather is pleasant all year in Kapalua Bay Beach, but to avoid any crowds head there from April to May and September to November. For Caladesi, any time is good.

Any clear day with good weather in the USA is a reason to be outdoors. The country's varied landscape and weather means there is a plethora of adventure activities lined up for everyine. You can enjoy just about any kind of adventurous activity you can think of, including climbing, mountain biking, white-water rafting and just about anything else. In the US, adrenaline junkies and adventurers of all persuasions are well catered for.

Best time: The skiing season at Bogus Basin is late November to early April. California is a year round destination, but surfing is best done during the winter months of December to February for the cooler water and swelling waves. For those who want to take on the Green Mountain loop, consider cool, crisp weather between May to mid-October.

The US is home to more world-renowned cities than perhaps any other country, and if you only have one chance to go there, your biggest problem is going to be deciding which ones to see.

Vast, icy and sparsely populated, Alaska, just across the Bering Strait from Russia, is very different from the rest of the United States. The deep, forested interior is largely uninhabited and inaccessible, so one of the best ways to see what the state has to offer is from the deck of a ship. Taking an Alaskan cruise will allow you to spot ocean-going wildlife including whales and seals as you sail along the rugged coastline of inexorable glaciers and jagged rocks.

As Oprah said, America is a salad bowl of different race, culture and ethinicity. With so many influences, it doesn't come as a surprise that the country features a wealth of festivals and events. If you want to get a taste of American culture amidst its people during your visit to the country, we recommend taking part in one (or more) of the many festivals. Whether you are into art, heritage, or music, there is a fun event waiting for you.

When is the festival: Burning Man takes place every last Monday in August. Mardi Gras is set 47 days before Easter. In 2020, it falls on Tuesday, 25th February.

If you’re determined to have fun, the US is for you. With world-class theme parks, resorts and entertainment of every kind, you’re unlikely to ever get bored in America. In fact, Sin City, Las Vegas is enough to single-handedly fill everybody's entertainment needs. It is the place to be if you’re looking for somewhere to let your hair down, hit the town and splash the cash. At the heart of it all lies the infamous strip, four miles of opulent hotels, mega-casinos and every type of entertainment you can imagine. Take your pick from circus performances, cabaret, erotica, boxing — and, of course, gambling.

A trip to the USA could mean bright lights, fashion, and showbiz. It could mean sprawling cities, skyscrapers, and ultra-modernity. It could also be small-town communities, rodeos, country music, and cowboys. It is untamed nature, deserts, plains, and mountains. It is swamps that are home to alligators and frozen forests that are home to bears. It is freedom and adventure, an enigmatic land of extremes and contradictions, and whatever it is to you, it’s a place you need to witness first-hand to even begin to understand.

USA Tours
Previous Next
View all USA Tours
Published by Marie Storm, updated on May 2, 2021
Tweet
Create your custom-made trip to USA

Traveling to USA? Chat with a local travel specialist in USA who can help organize your trip. 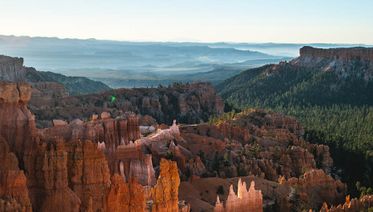 Great USA Itineraries: How Many Days to Spend?

From hiking the dizzying trails of Yosemite N ...

The 10 Most Resilient U.S. Beach Destinations During COVID-19

You may also want to see our tours and holidays in USA: