Every August, the streets near Valencia run red with rivers of tomato juice at the annual La Tomatina festival in Spain. Each year exuberant young travellers from around the globe take a trip to Spain with the sole intention to gather in Buñol, for the world's biggest food fight. While the tomato throwing festival lasts only a couple of hours, the week preceding La Tomatina has become an epic week-long fiesta of great music, fabulous food and loads of fun.

Although there are different versions to the story of how La Tomatina first started, what we do know is that the tradition goes back as far as 1944-45. The food fight was banned during the Franco period and later re-instated. Some theories as to its origins include a food fight between friends, an act of protest against the city council and the festival being the outcome of a food truck spillage.

The most commonly touted version is that La Tomatina started during a Giants and Big-Heads parade in honour of the towns' patron saint. Apparently, some youngsters began pushing and jostling to join in causing a parade participant to fall. The fallen man got up and in a terrible fury, he began lashing out at everyone around him. A nearby fruit and vegetable stall fell prey to the antics of a few spirited youths, who took hold of the vendor's fresh produce and started throwing tomatoes, first at the angry man and then at everyone else. The next year, the food fight was re-enacted by the boys with tomatoes brought from home; and so, began La Tomatina.

La Tomatina begins with palo-jabón, a two-story-high pole which is greased and topped with a Spanish prosciutto. Young men attempt to climb it to win the ham. Ideally, the ham should be claimed before the festivities begin, however, irrespective of whether that's achieved or not, after a short while a water-cannon is fired and La Tomatina begins.

Truckloads of tomatoes are hauled into town from Extremadura where they are cheaper. The lorries make their way through the town distributing approximately 120 tons of tomatoes. The epic food fight lasts about an hour followed by the clean up which is just as much fun.

People make their way to the Buñol River or nearby showers to get cleaned up while fire trucks wash down the streets. Apparently, the town is left sparkling due to the acidity in the tomatoes acting as a cleaning agent!

La Tomatina attracts tens of thousands of participants each year with as many as 50,000 people in attendance in 2012. As from 2013, the municipality of Buñol imposed a limit on the number of participants, making available a maximum of 22,000 tickets.

Tickets are sold from the official La Tomatina website. USD 25 will get you entrance to the festival with paella and sangria included. Added conveniences such as t-shirts, lockers and tented accommodation can also be purchased with your ticket in a conveniently bundled package for up to USD 62. To avoid disappointment, purchase the tickets to La Tomatina months in advance.

It's also worthwhile to check with popular tour companies, for whom an allotment of tickets is usually reserved. Here is a 1 day La Tomatina tour that is up for grabs!

A white t-shirt seems to be the most common garb donned at La Tomatina. Many opt to wear one of the many festival t-shirts made available by a tour operator or purchased with tickets. As for the rest of your gear, opt for old clothes which can be discarded after the event. For ladies, a sports bra or bikini top is essential. Shoes with good grip, such as trainers, are a must while flip-flops and sandals are a no-no. Goggles are another great accessory to have and can be purchased for a couple of euros at La Tomatina.

Accommodation should always be booked in advance and unless you are staying in Buñol, it is important to arrive early. While accommodation in Buñol is limited, it is readily available in Valencia, which is situated 38 km from the medieval town. Another popular option is to take a day trip into Buñol in by bus, train or tour from either Barcelona or Madrid where accommodation and entertainment are plentiful.

Whilst there aren’t many rules at La Tomatina, there are a few sensible ones which, if followed, will ensure that everyone has a lovely time.

Spain's La Tomatina festival promises to be a fun-filled experience. For some, La Tomatina is a great place to get wet and wacky and for others it's also an opportunity to meet new people, see new places and make the kind of memories that last a lifetime.

Tours in Valencia
Previous Next
View all Valencia Tours
Published by Marie Storm, updated on May 13, 2021
Tweet
Create your custom-made trip to Spain 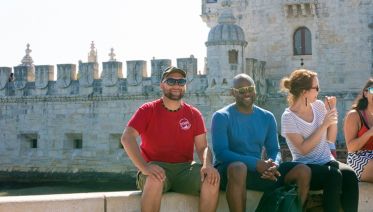