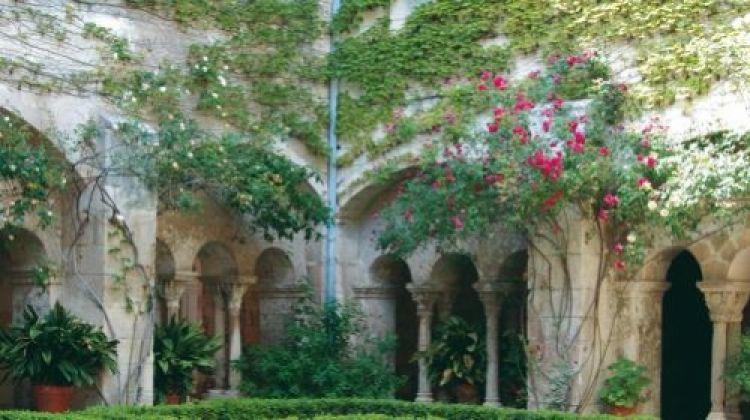 Follow in Van Gogh's footsteps and walk through picturesque Provencal landscapes in the Alpilles. In 1888 Van Gogh left Paris for Arles in Provence where, after a 16-hour train journey, he started the most ambitious and productive period of his life. He worked under luminescent skies and the bleaching Provencal Sun painting the fields, drawbridges, cypress trees, cafes, local folk and ancient Abbey Ruins. Here he exclaimed ‘My God! If only I had known of this country when I was 25, instead of coming here at 35!’ Living at Arles, his technique modified as he began to use the swirling brush strokes and intense colours that you see in works like ‘Bedroom at Arles’ (1888), and ‘Starry Night’ (1889). He seemed to imbue visible phenomena with vitality. In his enthusiasm he encouraged the painter Paul Gauguin to join him, but within weeks they began to have violent disagreements, culminating in a quarrel in which van Gogh threatened Gauguin with a razor. It was that night, in deep remorse, Van Gogh famously cut off part of his own ear. This walk traces his footsteps through some of the places that he painted and would have known well. More specifically you will be strolling in Les Alpilles, a small massif standing out as its white peaks rise apparently sheer from the plain of the Rhône valley, its slopes covered in vineyards along with olive and almond trees. Along paths dotted with cypress trees and lone chapels. Here you will discover the many images of the Alpilles' landscapes he painted from St-Rémy to the Baux-de-Provence and onto Arles. We are confident that you will have a better time of it than Van Gogh did; for a time he was in a hospital at Arles, he then spent a year in the nearby asylum of Saint-Rémy, working between repeated spells of madness. Just after completing his ominous Crows in the Wheat fields (1890), he shot himself on July 27, 1890, and died two days later.
View More
CUSTOMER REVIEWS
5 - Excellent
Based on 2 reviews
A
5 - Excellent
Excellent
“Four girlfriends took this trip in May, 2019 and loved it! The service and materials were excellent. The hotels were mixed, but mostly great.”
A
5 - Excellent
Excellent
“In Provence, the walks were most enjoyable and manageable. LOVED Baux de Provence and La Reina Jeanne. Also Carrieres de Lumieres was sensational. The supplied material was excellent: informative, detailed, clearly presented, good maps and in a bound copy. The notes were dependable and distances clearly stated. Restaurant suggestions were a real help, leading us to some fantastic food..particularly at Reina Jeanne and in Avignon at le jardin de Carmes. Brilliant. Many thanks.”
ITINERARY Expand All
WHAT'S INCLUDED
Accommodation
Meals
Transport
Others
WHAT'S EXCLUDED
Monthly Price Comparision
Why Book with Bookmundi
What are customers saying about Bookmundi
Excellent
4.71 Average 334 Reviews

No additional cancellation fees apply for this In Van Gogh's Footsteps tour. You can cancel the tour up to 70 days prior departure and avoid paying the full amount, but your deposit paid is non-refundable. No refund applies for cancellations within 69 days of departure.

For this In Van Gogh's Footsteps tour getting the required visa(s) is the responsibility for each individual traveller, as visa requirements vary depending on your nationality. We recommend to check with your local embassies representing the countries that you are travelling to, as part of this itinerary.

NEED HELP OR HAVE A QUESTION ABOUT THIS TOUR?
If you have any question about this tour or need help with planning a trip, please do not hesitate to get in touch with us. We're ready to help.
Get help
days 07 From US$ 1,210
Unlock US$ 61 in extra savings CHECK AVAILABILITY
Response Time: 2 hours Response Rate: 100% MAKE AN ENQUIRY

Tour is operated by : Sherpa Expeditions
200 Reviews
MAKE AN ENQUIRY Response Time: 2 hours Response Rate: 100%
Download Trip Notes Enter your email to get a PDF file containing all the trip information for the In Van Gogh's Footsteps tour.
Trip Notes Sent
We have sent the trip notes for this tour to:

If you book the In Van Gogh's Footsteps tour within the next 5 days, you can get by applying the following code: