If you are on a Spain tour, don't overlook a visit to Alhambra, a sprawling hilltop fortress and palace complex in Granada. Ancient fortifications, decadent palaces, breathtaking gardens, intricately constructed fountains and historic churches can all be found within the walls here — one of Spain’s most visited tourist attractions.

Every year, millions of visitors flock to this hugely significant site to wander around the seemingly endless grounds. Join the masses and see what the fuss is all about!

Here’s a quick breakdown of the most important information for your first visit to Alhambra:

A visit to the Alhambra doesn’t mean there’s just one sight to see — there are many attractions and different aspects of the complex to see inside and in the immediate vicinity. The three most significant are:

One of the oldest parts inside the Alhambra, the Alcazaba is thought to have been built in the 9th century. The fortress served mostly as a military headquarter and was built upon by several reigning kings, specifically Muhammed I. Due to its high security, the Alcazaba temporary served as the royal residence until the palaces were finished. Later, the fortress served as a state prison. The Alcazaba’s defining features are three towers: the Broken Tower (Torre Quebrada), the Keep (Torre del Homenaje), and the Watch Tower (Torre de la Vela).

Best described as a palace of gardens, Generalife was an oasis created for the royal family’s rest and relaxation needs. In other words, it served as an escape — a place the royals could come to find peace. Built between the 12th and 14th century, the rural villa was composed of decorative flower gardens, fruits and vegetable patches, a spacious courtyard, sculptures, statues, and fountains. The entrance to this exclusive paradise was slightly secretive and included passing through various courtyards on different levels. Although Generalife is adjacent to the Alhambra, it’s considered to be outside its boundaries.

It’s imperative that you plan your visit to Alhambra in advance. There are rules and regulations in terms of number of visitors admitted and at what time. To avoid disappointment, we suggest you follow the advice below:

It can be overwhelming to plan an efficient visit to the Alhambra solely because it’s such a massive complex and controlled with a slightly complicated schedule.

If done properly, you won’t have to waste time doubling back on yourself or taking longer than necessary routes. Here are our route suggestions.

If you haven’t reserved a ticket already

If you have reserved a ticket already

Remember it’s important to time your visit properly to ensure you arrive at the Nasrid Palaces at your scheduled time!

Other than the above-mentioned rules on ticket purchases and timing, there are a few additional things to be aware of.

If you didn’t plan ahead and tickets for Alhambra are sold out, there are still a few ways to get inside!

No matter how or when you visit Alhambra, there’s really no way to be disappointed. The sprawling grounds, enchanting palaces and gardens, and incredible history impress visitors time and time again. To get the most out of the Alhambra tour, it may be wise to consider a guided tour. Yes, you’ll pay a little bit more, but you’ll be getting an experienced and passionate local guide who knows the history and stories behind the Alhambra like no one else.

Tours in Andalucia
Previous Next
View all Andalucia Tours
Published by Marie Storm, updated on May 13, 2021
Tweet
Create your custom-made trip to Spain 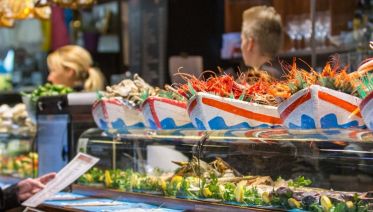