Customize a trip to Spain Chat with a local travel specialist who can help organize your trip.
Start Here
Home   ›   Spain Tours   ›   Spain Travel Guide   ›   A Guide to Traveling to Andalucia
Tweet

Located on the Iberian Peninsula in the south of Spain, Andalucia is a diverse region surrounded by the Mediterranean and Atlantic coastline. With towns that sit on hilltops, picturesque landscapes and rich history — Andalucia is a fusion of culture, art and mountainscape waiting to be explored. Here is a guide to traveling the mesmerizing region of Andalucia next time you’re there.

Andalucia rests in between the Subbaetic and Penibaetic mountains in southern Spain. The region is divided into the eight provinces of Almeria, Cadiz, Cordoba, Granada, Huelva, Jaen, Malaga and its capital city of Seville. It is the second largest region in Spain and boasts a distinctive culture and Spanish identity.

1. Seville: For the love of Flamenco

The capital of Andalucia, Seville is surrounded by gothic cathedrals and an eclectic mix of Mudejar palaces and baroque churches. The winding medieval paths bring light to the city’s aristocratic Moorish past, where flamenco dance halls encompass the city. Flamenco is in Seville’s blood and is the very fabric of life in the capital city.

Good to know: Seville’s sunny temperament makes siestas extra popular here. Many shops and neighborhood markets close between 14:00 to 17:00. Most stores are closed on Sunday.

Resting on top of a rocky limestone ridge, with whitewashed houses that overlook the Guadalete river below is Arcos de La Frontera. Renowned for its exceptional architecture, the white hill town holds a long history with many Moor and Christian roots still visible in all corners of the city. Moorish castles stand alongside Christian churches as a reminder of the Reconquista — when Christian forces reclaimed Arcos from the Muslim Moors.

Good to know: Arcos de La Frontera is part of a series of white hill towns on the Route of Pueblos Blancos. The route is dotted along the stunning white houses. Give yourself three days to explore the whole route.

On the foot of Sierra Nevada rests Granada, a city that celebrates both its Moorish pasts and Andalusian roots. Granada’s beautiful blend of Andalusian Islamic architecture makes this city a southern gem. The city’s multicultural heritage and history can be explored through the cobblestone paths of this Andalusian jewel.

Good to know: The best lookout to see all of Granada is in Alhambra at the Tower of Candles. To reach the peak of the tower requires lots of walking so make sure you bring comfortable shoes.

Known for its sherry, horses, flamenco and aristocratic past — Jerez de la Frontera is a town in the Cadiz that has long been hailed as Spain’s winemaking jewel. The capital of Andalusian horse culture, the town dates back to the Moorish era. Many of the streets and buildings are heavily influenced by Muslim architecture with wide streets, Moorish fortresses, and jacaranda trees that sit in rows around the city center.

Good to know: Visit Jerez during their celebration of harvest in September where the city holds their yearly Jerez Sherry Festival to welcome in the grape harvest.

Bridging Arcos de la Frontera to Ronda to Seville is Sierra de Grazalema, Andalucia's park known for its stunning peaks, gorges, hilltop villages and mountains. Sierra de Grazalema is the wettest part of Spain and is considered a Biosphere Reserve by UNESCO. Its diverse landscape is the perfect place for outdoor adventures and those looking for that special hike to some of Spain’s greatest scenery.

Good to know: Sierra de Grazalema is made of porous limestone with an underground of tunnels and pools perfect for those interested in caving, canyoning and spelunking.

6. Tarifa: The Gateway to Morocco

At the most southern tip of Spain is Tarifa. Nestled between the crossroads of where the Mediterranean and Atlantic meet, Tarifa is a city with its own charm. The last stop before Morocco, the white-colored streets and stiff winds draw surfers, windsurfers and kite surfers from all around. Its laid-back atmosphere and North African influence make Tarifa the perfect getaway.

Good to know: Kitesurfing in Tarifa is difficult for beginners due to the strong waves and stiff winds. So if you’re new to kitesurfing, try your hand learning in places such as Dakhla in southern Morocco.

The best time to visit Andalucia is from March to June or September to November when the temperature is cooler and pleasant.

On a trip to Spain, spend at least a week in Andalucia to truly immerse yourself in all that the region has to offer, spending time in each city and exploring the history that surrounds it. Stay at least two nights in Seville. Then make your way down to Cadiz and get lost in the white hill towns. You should spend another day or two hiking and adventuring through the parks and end your time in Granada with three days to explore it all.

The best way to get to Andalucia from cities such as Barcelona and Madrid would be by train. Spain offers high-speed trains (AVE) to the Andalucia region into cities such as Seville, Malaga and Cordoba. Andalucia can easily be reached from Madrid or Barcelona with direct trains into Seville. Depending on your time and budget, there are also flights from Barcelona that fly directly into Seville.

Andalucia is a region infused with Spanish hospitality steeped in Moorish history. A region that dwells into a history of its own, Andalucia is where you’ll discover a beauty, richness and culture individual from the rest of Spain. To ride the waves, taste the wine, and explore Spain’s rich culture, travel to Andalucia.

Tours in Andalucia
Previous Next
View all Andalucia Tours
Published by Marie Storm, updated on May 9, 2021
Tweet
Create your custom-made trip to Spain 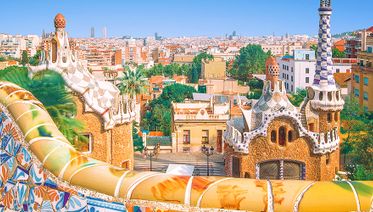