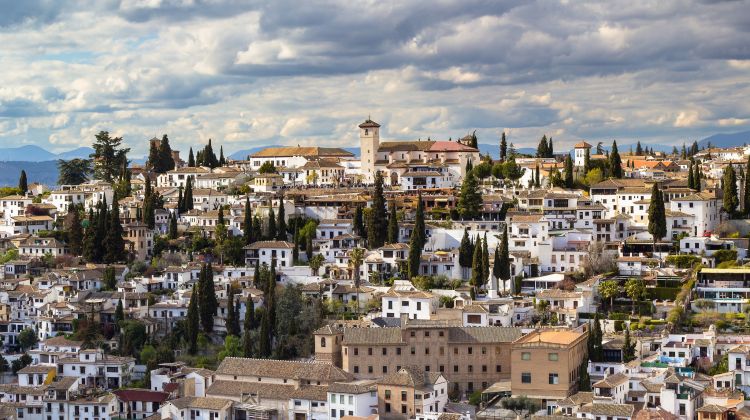 HIGHLIGHTS
Don't miss this chance to explore one of the oldest cities of Spain. We will pick you up from your hotel in Granada and drive you through a green countryside and past Andalusian olive groves to Granada, a beautiful medieval city located at the foothills of the Sierra Nevada.

Start your trip with a visit to Alhambra, a medieval palace and fortress complex that was first constructed in 889AD on the remains of Roman fortifications. Skip the long lines outside to discover some of the most impressive palaces and gardens of Spain. Sometimes referred to as a 'Pearl Among Emeralds' because of the opulence and grandeur of its architecture, Alhambra is a place worth exploring.

Enjoy breathtaking views of the Sierra Nevada as you stroll through the Gypsy neighborhood of Albaycin, a district of Granada. Experience the multicultural influences of the city center, rich with the aroma of teas and spices drifting from local houses and markets. Learn the Roman, Muslim, Christian, and Gypsy history of Granada on its storied streets. Transfer back to Seville after a full day of Spanish history, culture and exoticism.
View More
CUSTOMER REVIEWS
5 - Excellent
Based on 2 reviews
L
5 - Excellent
Fantastic Trip
“The whole transfer trip from Seville to Granada was fantastic. We requested for a short visit at Ronda to see its beautiful gorge and we love it! Our tour guide, Javier was knowledgable, helpful and accommodating throughout the whole trip.

Would definitely recommend them to those who are planning to visit Spain!”
A
5 - Excellent
Highly Recommended
“We had our wonderful tour guide Miguel pick us (5 friends and myself) up at our AirBnB with no problem. There was a small mix up with the pick up time but Not Just A Tourist was very quick to respond to me the night before (pretty late at night) with the correct times.

The trip is LONG tiring and TOTALLY WORTH IT! Granada and La Alhambra are the finest examples of Moorish art work anywhere in Spain!

We stopped at a lovely road side restaurant for a quick breakfast complete with cute, friendly cats to pet! Then we drove through the countryside and saw a million olive trees. Miguel answered all of our questions and was very informative along the way.

Once we arrived in Granada we got a private tour of the city and hiked up to the best view points to see La Alhambra. Afterwards we stopped in a local favorite place for traditional tapas. Miguel ordered for us so we could enjoy the finest food! It was a treat and delicious!

We were then dropped off at La Alhambra for our skip the line guided tour. So breathtaking and wonderful . words cannot describe the experience.

Miguel met us afterwards to drive us back to Seville we slept most of the way.

I recommend this company completely for a great trip and a great experience!”
WHAT'S INCLUDED WHAT'S EXCLUDED
Why Book with Bookmundi
What are customers saying about Bookmundi
Excellent
4.71 Average 334 Reviews

NEED HELP OR HAVE A QUESTION ABOUT THIS TOUR?
If you have any question about this tour or need help with planning a trip, please do not hesitate to get in touch with us. We're ready to help.
Get help
hours 12 From US$ 297
CHECK AVAILABILITY
Response Time: 2 hours Response Rate: 100% MAKE AN ENQUIRY