Looking for outdoor adventure while on a Spain tour? El Caminito del Rey trek, also known as the hike with the world’s most dangerous walkway, might just be the answer. Situated in the Andalusian province of Málaga, Spain, and built along the near-vertical walls of the Gaitanes Gorge, the Caminito del Rey walkway is suspended 100 meters above the Guadalhorce River, which meanders serenely between the steep canyons of the ravine.

The pathway was built between 1901 and 1905 to accommodate the crossing of laborers and to carry materials between two nearby hydroelectric power plants. In 1921, King Alfonso XIII walked along the pathway as part of the inaugural ceremony for the opening of the Conde del Guadalhorce dam. Thus, it was named Camino del Rey, meaning kings walkway, and later abbreviated to El Caminito (the King’s little walkway).

Some time ago, the walkway fell into disrepair and soon became much too tempting for thrill-seekers looking for the ultimate challenge. El Caminito gained its more recent reputation as the world’s most dangerous walkway as a result of the many fatalities that occurred before it’s renovation and re-opening in 2015.

The Caminito del Rey trek starts at the visitor reception area, which is where the shuttle bus stops. It is situated near the car park and El Kiosko Restaurant. Once here, you select one of two access routes: the Path (1.5 km) or Gaitanejo way (2.7 km). The main difference between the two access ways is distance. The shorter route uses a smaller pedestrian tunnel situated 200 meters before El Kiosko restaurant, whereas the longer one uses the large tunnel next to El Kiosko restaurant. Both options offer excellent sightseeing opportunities.

Below are some of the iconic sights that are worth being admired on the way.

For spectacular views and the adrenaline rush that comes with crossing a mountain path at dizzying heights, the Caminito del Rey hike offers a once in a lifetime adventure. The upgraded route runs parallel to the original death defying “King’s Walk Spain” with parts of the old route visible in certain areas. While the new walkway is much safer, it nevertheless delivers an exhilarating kick for nature enthusiasts and daredevils alike. 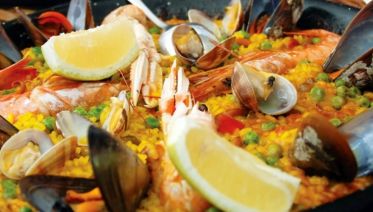