Customize a trip to India Chat with a local travel specialist who can help organize your trip.
Start Here
Home   ›   India Tours   ›   India Travel Guide   ›   A Guide to Ladakh: For First-time Travelers
Tweet

Known as ‘Little Tibet’, until recently Ladakh clang to its mystical allure largely helped by its restricted accessibility and the periodically re-surfacing territorial dispute between India and China. But despite its growing popularity now, Ladakh still remains a relatively unknown, yet captivating destination for the intrepid traveler.

Arid mountains bejewelled by jagged peaks, spellbinding vistas, sinuous roads promising to make a seasoned adrenaline junkie rejoice with glee, torturous passes, hypnotic high-altitude valleys and glistening lakes, and ancient Buddhist monasteries — all that is Ladakh. The promised land of adventure seekers, nature lovers, knowledge chasers and those who simply want to get away.

The Ladakh region is a desolate expanse of diverse land offering an unforgettable experience to those who dare to dream. An experience that expands far beyond the thrilling endurance of harsh climatic conditions in one of India’s hidden gems.

1. Visit the Royal Leh Palace: Notwithstanding its un-kept and partially dilapidated state, the royal palace is an imposing structure dominating the Leh landscape. Set high up on a hill, it is a reminder of Leh’s royal past, without the commanding opulence and grandeur of most India’s palaces.

Following the damaging conquests of the palace in the 19th century, which contributed to its abandonment by the royal family, the Leh palace is an arresting example of Tibetan secular architecture. Now largely in ruins and devoid of signage and guides, it welcomes you to re-discover its fascinating past.

2. Enjoy the shimmering waters of Pangong Tso: The spectacular lake set high on the Changtan plateau bordering Tibet is one of the most popular spots in Ladakh. Made even more popular by Bollywood movies, it is an essential stop for every self-respecting instagrammer. And while the lake itself is spellbinding, with a stunning backdrop of sharp mountains, the journey to get there is equally mesmerising.

3. Explore Nubra Valley: Located in the north-east of Ladakh, Nubra Valley offers multitude of experiences. Sand dunes reminiscent of those in Arabian deserts can be conquered on two-humped camels or in jeeps. Quad bike rentals dotted around the valley entice those preferring to be in the driver seat. Or you can simply trek through, paying visits to one of the villages. And if history and culture is your poison, visit Nubra’s most historic monument, the picture-perfect Diskit monastery.

The Kardung La pass at 5,359 m is a gateway to the Nubra Valley and one of the most riveting passes to ride on. Chang La at 5,360 m is only slightly lower and equally challenging way to reach the picturesque Pangong Tso.

5. Marvel at the ancient monasteries: Inhabited mainly by people of Tibetan descent, ancient Buddhist monasteries and monks clad in maroon robes are an inseparable part of the Ladakh fabric. Whilst Ladakh hosts bounty of picture-perfect monasteries, some truly stand out as warranting a visit.

The hill-side terraced splendour and unmissable charm of Diskit, Likir, Hemis, Spituk and Thiksey monasteries will challenge you to put away your camera. Each one is part of the living tradition of Ladakh and each will leave you spellbound with their unique decorations and structures.

6. Raft the rivers: River rafting might not be the first thing that comes to mind when you think about Ladakh but it is one you should certainly consider. Moving down the untamed Indus and Zaskar rivers offers a uniquely intense experience of this desert landscape. And with rapids ranging mainly from grades I to III, it is an experience that can be enjoyed by many.

The Indus river section Phey to Nimmo is popular for its dramatic vistas and rapids that can be conquered by relative beginners. If your level is more experienced, aim for the Chilling to Nimmo section on the Zanskar River. Nimmo is the point of confluence of the two rivers and a place of captivating natural beauty as the two shades of water meet.

7. Be a part of a festival: Baring a witness to monastic festival is an unforgettable experience and one worth timing your trip for. The vibrant and colorful affairs of Buddhist festivals centre on the celebration of life with ceremonies fending off evil spirits. Each festival is further celebrated in honor of the monastery founders.

The masked festival of Hemis Tsechu, festival of oracles Matho Nagrang, the widespread Dosmochey festival celebrated at Likir, Diksit and Leh monasteries and the popular Chemrey Angchok that climaxes by a rowdy masked procession moving through the main market in Leh are just some festivals to consider.

8. Defy gravity at the Magnetic Hill: The lure of the Magnetic Hill, unlike the rest of Ladakh, doesn’t lie in its overt beauty. It is the fascination that attracts the curious mind that has put this landmark on the map. Situated on the Leh – Kargil highway, the Magnetic Hill has become a popular spot with those seeking to witness an unusual phenomenon.

Is it a superstition, a force of gravity or an optical illusion that makes stationary objects appear to move uphill? Whatever your belief, there is only one way to find out. Park your vehicle in the yellow box on the road and see what happens.

9. Brave the roads by motorbike: Ladakh literally means ‘the land of high passes’, and as such makes a frequent addition to the bucket list of many fervent bikers. There is something to be said about conquering the inhospitable dramatic landscape of Ladakh on two wheels, with nothing standing between you, the torturous road and the inhospitable yet magnetic landscape.

Negotiating the unruly roads surrounded by towering massifs one minute and vast expanse of lush plateaus another minute is an enchanting experience you will cherish forever.

10. Trek through the region: Trekking in Ladakh is a thrilling experience attracting adventurers from all over the world. It is easy to feel at one with nature, moving through narrow passes, crossing deep valleys, traversing rope bridges and admiring the glistening snow-clad peaks.
The traditional way of living in symbiosis with nature is still practiced in the remote villages that haven’t lost anything of their traditional charm. It is interacting with the always hospitable locals that really reaches deep into one’s soul and leaves everlasting memories.

Leh is the largest town in the region and a practical base for exploring Ladakh.

An increasing number of sites in Ladakh is now open to domestic and international visitors alike, although some still require special permits to be organised prior to entry.

For seamless travel experience, it is advisable to check closer to your departure date to get the most up-to-date requirements.

Depending on the budget and adventure spirit, visitors to Ladakh have a couple of options to get around.

With the exception of overnight trips to Nubra Valley and Pangong Tso and longer trekking excursions, most people will base themselves in Leh and explore Ladakh from there. Here are some accommodation options to consider.

1. Mentokling Guesthouse
This rustic guesthouse is ideal for those on a tight budget who do not wish to compromise on quality. Located conveniently close to the main bazar, the guesthouse offers serene views of the iconic Leh Palace and dramatic mountains. The hosts are famous for their hospitality and when the time comes, the resident restaurant promises to hit the spot.

2. Shambhala Resort
If you like to get far away from the crowds and up, close and personal with nature, then Hotel Shambhala is a must. Nestled amidst the verdant landscape of the Leh countryside, it is the perfect retreat with ample space and plenty of opportunities to relax in one of the hammocks in the garden.

This is as close to luxury as it comes in Leh. The Grand Dragon boasts charming spacious rooms complimented by array of modern facilities all wrapped in a top-class service. Located at a vantage point, it offers splendid views of the surrounding mountains and an excellent terrace restaurant ideal for enjoying sunsets.

Ladakh is a jewel in the northern most part of India, distinct by its dramatic natural beauty and abundance of adventure activities promising to satisfy all kinds of travelers. Once a remote mystical region visited only by the most intrepid of travelers, it is now increasingly popular with visitors from all backgrounds and walks of life. Whatever the interest, appetite for adventure, available time, travel preference and budget, Ladakh has something for everyone.

Tours in Leh Ladakh
Previous Next
View all Leh Ladakh Tours
Published by Marie Storm, updated on May 7, 2021
Tweet
Create your custom-made trip to India 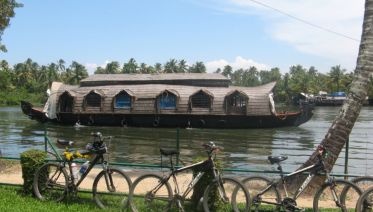