Perhaps Rome is not the first European city that comes to mind when someone mentions fairy-tale Christmas destinations. And yet, the Italian capital can be incredibly rewarding to visit during the cold months. Between the abundance of cultural sights, noticeable lack of crowds, vibrant café and bar scene, and mild climate that allows carefree sightseeing, Rome in winter may just be the ideal Italy holiday destination. Keep reading to find inspiration for what to do in Rome if you plan on visiting the Eternal City during wintertime.

Since ancient times, Rome is one of most important cities in Europe. Once a capital of the Roman Empire, today it is home to over 2 million people and a plethora of famous churches, museums and ancient ruins. The Italian capital is famous around the world for its buzzing atmosphere that pulses year-round on its winding cobbled streets and quaint piazzas; you can rest easy knowing that whenever you decide to travel to Rome, you will be bound to have an adventure.

Roman winters are characterized by mild weather that lasts throughout the season. In early winter (late November and December, up to Christmas), temperatures rarely drop to lower single digits, although it is not unusual to have rainy days in this period. January is the coldest month, with temperatures on average falling between 3 and 11 degrees. February is typically warmer and you may even experience bonafide springtime weather during this month. Overall, you can expect to have plenty of sunshine and all-around favourable weather, which is good news if you plan on getting around and exploring the city on foot.

Since winters in Rome can be somewhat unpredictable, it is recommended that you pack clothing you can layer (shirts, sweaters, coats), so you can remain prepared for all occasions. Also, it is advisable to always carry an umbrella, as this season does tend to get rainy on occasion.

The saying “all roads lead to Rome” exists for a reason. As one of the busiest transport hubs in Europe, Rome is serviced by daily flights from cities across the globe, including London, New York, Tokyo, etc. There are two airports in the city: Fiumicino International Airport, which has excellent public transport connections to the city center, and Ciampino International Airport, which is located in the southeast part of Rome and services mostly low-cost flights.

Rome can also be reached from various Italian and European towns via buses and trains. The main railway station is called Roma Termini and it’s located in the central part of the city.

Like any other major European city, Rome has an abundance of accommodation options, ranging from hip, wallet-friendly hostels to luxury hotels to boutique guesthouses. Here are some of most convenient areas to stay while in Rome if you plan on doing a lot of sightseeing:

Rome has no shortage of monumental historical sites that you can explore on your own or with an organized tour. Most of them are packed in the city center, which means it’s easy to get from one to another in case the weather turns sour. Some of the must-visit sites include:

Summer is the season that draws all the crowds to Rome, but winter is when you can experience the city as if you were a local. Here are some of the most popular things to do in Rome during wintertime:

As you can see, Rome in winter can be as equally majestic and enticing as any other European capital. Moreover, if you don’t enjoy 30°C + temperatures and hordes of tourists at every step, chances are you’ll find Rome even more charming outside of peak season.

Tours in Rome
Previous Next
View all Rome Tours
Published by Emily Brown, updated on March 14, 2022
Tweet
Create your custom-made trip to Italy 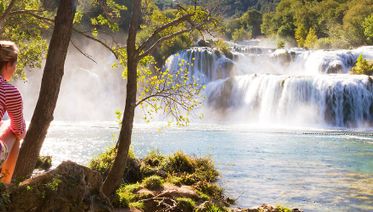