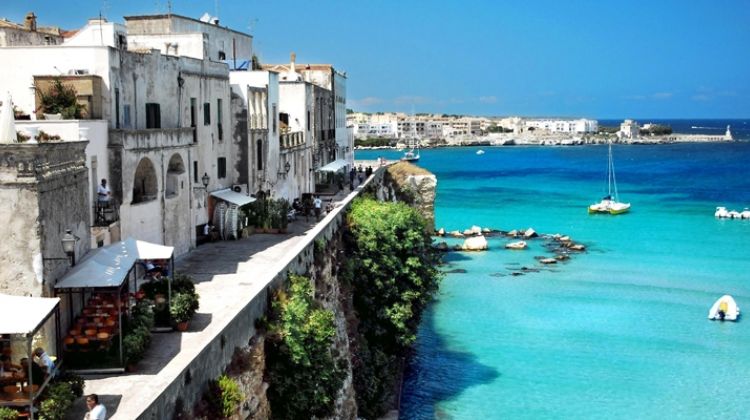 HIGHLIGHTS
Discover Otranto in a walking tour of 2 hours.
Gateway to the East , built on the sea .
The city tour will take you to discover the Norman Cathedral , consecrated in 1088, a work of Count Roger I adorned later (about 1163), by Bishop Jonathas , with a mosaic floor , It has a rose window and side portal of 1481. The interior , a basilica with ship and two aisles , contains columns said to come from a temple of Minerva and a fine mosaic pavement of 1166 , with interesting representations of the months , Old Testament subjects and others . Bones and relics of the Martyrs of Otranto , who perished in the 15th-century siege surround the high altar . The church Has a crypt supported by forty-two marble columns . The same Count Roger founded a Basilian monastery Also here , Which , under Abbot Nicetas , Became a place of study , the ITS library was nearly all bought by Bessarion .

After seeing the cathedral you will visit the Church of St. Peter and Castle , reinforced by Emperor Frederick II and rebuilt by Alphonso II of Naples in 1485-1498 . It has an irregular plan with five sides , with a moat running along the Entire perimeter . In origin it had a single entrance , reachable through a draw- bridge. Towers features three cylindrical ones and a bastion called Punta Diamante ( "Diamond 's Head "). The entrance sports the coat of arms of Emperor Charles V.

NEED HELP OR HAVE A QUESTION ABOUT THIS TOUR?
If you have any question about this tour or need help with planning a trip, please do not hesitate to get in touch with us. We're ready to help.
Get help
hours 02 From US$ 134 Flat Rate
CHECK AVAILABILITY
Response Time: 3 hours Response Rate: 100% MAKE AN ENQUIRY