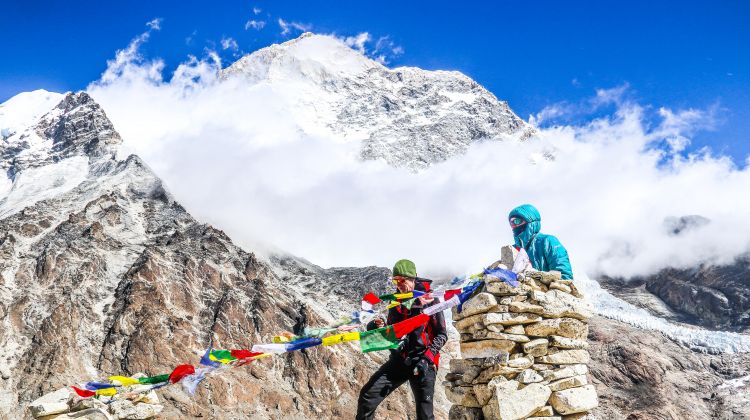 HIGHLIGHTS
Although Makalu is the fifth highest mountain in the world at 8481m, the trek to its base camp is a less-frequented route due to its relative inaccessibility. However, if you are an adventurous trekker looking for a trek off-the-beaten path, then it’s not too hard to reach! There are daily flights to Tumlingtar, a few hours’ drive from the trailhead, and basic lodges along the way.

The Makalu Base Camp trek is an ideal trek for nature-loving trekkers who want to experience a variety of landscapes and cultures, as well as uncommon views of some of the world’s tallest mountains, including Everest.

The trek starts in warm, terraced farmland inhabited by the Rai people, an ethnic group found predominantly in the hills of eastern Nepal. As the route ascends, you will pass through rhododendron forests (most impressive in the spring, when the flowers bloom amazing red, purple, pink and white) and cloud forests, through some of the last areas of pristine forest and alpine meadows in Nepal.

Deeper into the mountains, past the Barun River Valley, you will pass steep granite cliffs, glaciers, and spectacular waterfalls. At the higher elevations live the Sherpa people, an ethnically Tibetan group who predominantly reside near Everest.

From Makalu base camp, there are spectacular views of the rarely seen Kangshung face of Everest, as well as Lhotse, Chamlang, and Kanchenjunga in the far east. The Makalu Barun National Park is the eighth largest in Nepal, covering 2,330 sq. km, and is home to some of the rarest flora and fauna in Nepal, including the red panda.

View More
CUSTOMER REVIEWS
5 - Excellent
Based on 1 review
P
5 - Excellent
Exceptional trek in the wilderness of Makalu Base Camp
“Pasang and Pemba Sherpa (cousins) are the best 1, 2 punch combination for Himalayan trekking operators in the region! Our recent trek to the Makalu Base Camp Trek, Makalu conservation Area NP, each brought a thorough and thoughtful approach to the logistical and exceptional elements of the trek. Even when encountering unexpected obstacles, both Pasang and Pemba maintained a calm and controlled demeanor and never once shifted responsibility, even when things that were clearly not their fault came up... they always owned the issue and managed the situation with our well-being and comfort at the forefront of their solutions.

Having never met either guide before landing in Kathmandu, and only corresponding via text messages with Pemba prior to the trip, we left a mere 8 days after arriving feeling as if we had not only made two new, amazing friends, but the kinds of friends we would be honored to call family!

Pemba and Pasang carefully and attentively balanced the authenticity of our experience with our comfort and physical well being for the entirety of our time, and even went above and beyond the footprint of the designed trek to provide additional experiences in Kathmandu with guided visits to the Bodinath Stupa and Darbar Square... both unexpected and amazing experiences!!!

In all my future visits to Nepal, of which my business and I are currently planning, we will be using the services of Pasang, Pemba and the rest of the team at Mount Adventure Holidays... we couldnt have been more pleased with our experience.”
ITINERARY
Alt. in: ALTITUDE MAP
Expand All
WHAT'S INCLUDED WHAT'S EXCLUDED
Why Book with Bookmundi
What are customers saying about Bookmundi
Excellent
4.71 Average 334 Reviews

QUESTIONS AND ANSWERS Find answers to the most frequently asked questions about this tour.
Read more questions and answers
NEED HELP OR HAVE A QUESTION ABOUT THIS TOUR?
If you have any question about this tour or need help with planning a trip, please do not hesitate to get in touch with us. We're ready to help.
Get help
days 15 From US$ 1,500 See Group Discount
CHECK AVAILABILITY
Response Time: 1 hour Response Rate: 100% MAKE AN ENQUIRY