The Hindu festival of Holi in India is undoubtedly the country’s most vibrant — and outside of India, probably the best known. Although now celebrated in many places around the world, Holi is best experienced in its country of origin, but just being in India at the right time won’t guarantee you will find what you are looking for. Here is our guide to the significance of Holi, the best places to go for the most spectacular events — and also how to have the safest and most enjoyable time possible.

Holi, the ‘Festival of Colors’ and also the ‘Festival of Love’, is one of the country’s most lively, enjoyable and eagerly-anticipated festivals of the year. It is a time to meet friends, to play and laugh, to forgive and forget, and to repair broken relationships.

The celebration commemorates the victory of good over evil and marks the end of winter and the arrival of spring. Unlike many Hindu festivals, the religious element is minimal — Holi is mostly about enjoying the moment, also making it one of the most accessible festivals to outsiders.

According to one Hindu legend, a demon king, Hiranyakashipu grew conceited, and decreed that everyone in his kingdom should worship only him.

However, his own son Prahlada defied him and continued to worship Lord Vishnu. Eventually, the boy’s aunt Holika, having received a boon that made her immune from fire, tricked Prahlada into joining her on a pyre. However, Prahlada’s devotion saved him and Holika was devoured by the flames. Lord Vishnu then appeared and slew the demon king. Thus, Holi celebrates the victory of Prahlada over his evil father and aunt as well as commemorating his devotion to Vishnu.

The date of Holi festival is determined by the Lunar calendar and coincides with the full moon. The corresponding date on the Western calendar varies each year, but it usually falls between the end of February and mid-March. Here are the dates for the years ahead:

Holi is usually a two-day festivity. On the eve, known as Holika Dahan, everything begins at dusk, when bonfires are lit to burn effigies of Holika. This is accompanied by rituals and prayer. The next day is known simply as Holi and is basically the main event. It is a much more boisterous affair than the rather subdued proceedings of Holika Dahan.

Celebrations start early in the morning. The streets are transformed into a riot of colors as mass water and color fights break out. People use buckets, water balloons and water guns to drench one another with coloured water. Participants also color each other’s face in bright colored powders till they are almost unrecognizable.

Another inextricable part of Holi is the consumption of bhang, a cannabis paste that is incorporated into food, especially sweets, and drinks. Often, alcohol is also consumed, and by early afternoon proceedings can become quite rowdy. After this, people begin to drift home to sober up and wash off the colours in preparation for a more peaceful evening.

Holi is primarily a northern Indian festival, and if you find yourself in the south, it is quite possible that the festival will pass you by entirely. However, even in the north, Holi celebrations vary from place to place, and for the best experience, you should choose where to spend Holi in order to live your expectations.

1. Holi in Delhi
Delhi lives up to its reputation as a metro city and celebrates Holi with much enthusiasm. Besides the festivities in the residential neighbourhoods, and the numerous impromptu street parties, you can join multiple parties that are organized in various pockets of the city. This is where tradition meets modernism, and Holi becomes a vivacious event with loud music, dancing, and bright colors. One of the biggest and best known is the Holi Moo festival; in 2018, it reached its 12th year, boasting four stages and 40 music artists.

2. Holi in Mumbai
Mumbai can be one of the craziest places to be during Holi as it comes alive in a citywide party. A local tradition that is repeated in almost every Mumbai neighbourhood is the breaking of the buttermilk pot. A pot of buttermilk is hung in the air and men form human pyramids to try to reach it. The one who breaks the pot is crowned Holi King of the year.
As with Delhi, there is a plethora of organised events to partake in. Some parties include live DJs and other entertainment and often require you to pay for entry – while these parties are undoubtedly a lot of fun, don’t expect a particularly traditional experience. Unlike in Delhi, outside of hotels, few parties are organised specifically for foreign tourists.

3. Holi in Varanasi
Varanasi is India’s spiritual heart, but the locals still celebrate Holi with as much gusto as anywhere else. Head to Varanasi to experience a more authentic version of the festival along the banks of the revered Ganges. The night before Holi, bonfires are lit, and locals throw dried dung cakes into the flames and offer grain to the fire god. Some also smear their bodies with ubtan, a special paste which is then also thrown into the fire. This is believed to protect from disease for the rest of the year. On Holi morning, people play with colours until midday before congregating along the Ghats in the evening to chat, sing and dance.

4. Holi in Mathura and Vrindavan

For possibly the most unrestrained Holi party — as well as the most traditional — you can choose between the cities of Mathura and Vrindavan in Uttar Pradesh. In fact, both cities throw themselves into the celebrations for a week. The former is the birthplace of Krishna, while the latter is where he spent his childhood. Holi here is associated with the love story of Radha and Krishna and is thus celebrated with much aplomb. For any outsider, the celebrations in the Bakai -Bihari Temple and Gulal-Kund will be of much interest.

5. Holi in Rishikesh
The holy city of Rishikesh in the north of India is among the most rewarding places to enjoy the event. This city is on a more manageable scale than places like Delhi or Mumbai, and it can feel as though the whole town is celebrating together. While the day’s events can in no way be described as restrained, spending Holi in Rishikesh can offer a more intimate (and perhaps safer) experience.

Given that you are at the right place, you should expect to be pelted with colored powder and assaulted with water balloons and water guns, as soon as you step outside. This all takes place against the background of Bollywood music and singing as well as the eating of Holi treats.

Everyone is considered fair game and clutching an expensive-looking camera or other electronic equipment won’t save you — so leave anything you don’t need back indoors. The best approach is to simply join the fun — come prepared and give as good as you get!

Consumption of bhang is not only completely legal throughout most of India, but it is also an integral part of the celebration of Holi. While travelers are not necessarily advised to avoid it completely, those who are not used to it should probably steer clear. Sometimes it takes a while for the effects to begin, after which they can come on strongly. It is best to be sensible about what you eat and drink.

As much as we hate to say it, being a woman, especially a foreign woman at Holi in India can bring much unwanted attention. Cases of harassment is not unheard of so while we do not discourage women to revel in this celebration of love, we highly encourage everyone to be vigilant, aware and cautious. Here are some safety measures for women that are best to be followed:

With all the colors and excitement — not to mention the free-flowing bhang and alcohol — Holi celebrations are some of the wildest in India. As with any large gathering of intoxicated people, there is always an element of danger, but if you are sensible, understand the situation and keep your wits about you, celebrating Holi in India is sure to be one of the highlights of your entire trip.

Tours and Holidays in India
Previous Next
View all India Tours
Published by Marie Storm, updated on May 6, 2021
Tweet
Create your custom-made trip to India 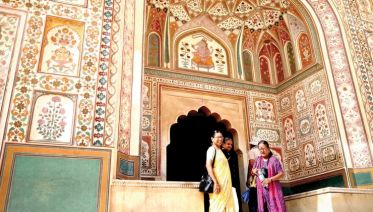