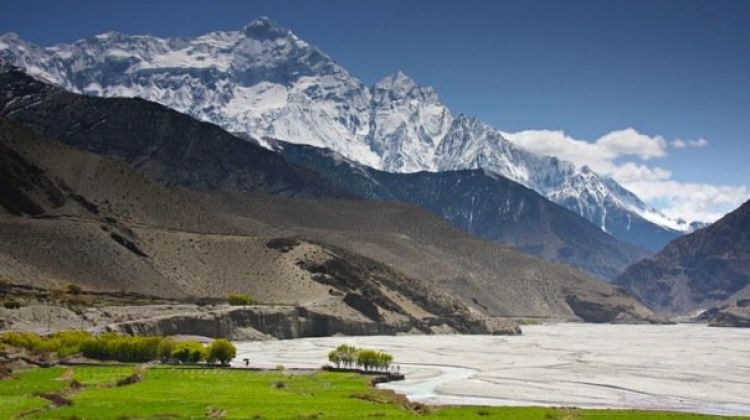 Tour with Flexible Booking Policy
HIGHLIGHTS
Hidden behind the Himalayan giants Dhaulagiri and Annapurna, Mustang is a small area that lies in the southern border of the Tibetan highland and is a restricted area that requires a special trekking permit through a registered trekking company. The Mustang trekking trail consists of treeless deserted scenery, vertical rocky paths up and down the hill and beautiful views of Mt. Dhaulagiri, Nilgiri, Annapurna, Tukuche peak, Mustang Himal, Tilicho peak, Arniko Chuli and many other splendid peaks.

Trekking in Mustang is really one of the most gratifying experiences you can get. Also, you will get a firsthand glimpse into the ancient Buddhist culture in the area that has been untouched by modernization for centuries. The Mustang trek as designed by Unique Adventure International can be also referred as the “Rhododendron trek” because it takes you to different varieties of rhododendron forests and looks absolutely enchanting during the spring season because of blooming rhododendrons. Moreover, you will come across the Thorang La pass (5417 m) where you will enjoy some stunning high Himalayan scenery over the Kali Gandaki valley, with the entire Annapurna range, Mukut and Mustang Himal overlooking your trek from the west.

We begin our biking tour from Besisahar in the lush central hills, riding our way through the beautiful path until we enter Yak Kharka (4000 m). From here, the track is vertical up to the base camp of Chulu East. Then we follow the route climbing to the summit of Chulu Far East which is pebbly, icy and very much vertical. From the top of Chulu Far East we will get some spectacular close-up views of Annapurna I, II, III, IV, Manaslu, Gangapurna, Chulu West, Pisang Peak, and the north part of Himlung Valley. After mountaineering, we move towards Manang and on the next morning, we take a bike ride to Thorong La Pass (5416 m) and continue riding along the way to a holy Hindu temple – Muktinath. Finally, we reach Jomsom from where we can fly back to Pokhara.
View More
CUSTOMER REVIEWS
4.5 - Excellent
Based on 9 reviews
C
4 - Very Good
Upper Mustang Adventures
“Good day travellers, very happy with the organisation. Everything went very smoothly, even though we started changing the planning during the trip. All was accommodated with a smile. Having a guide that knows the region is an absolute must. We stayed a bit on our hunger for that, but judging from the other teams around us, it will be hard to find someone who really understands the local culture. Best to buy a map, read as much as you can before hand, so you can wave in the information given. Very good trip”
R
5 - Excellent
Trekking upper Mustang with Dev as guide
“This is a classic 10 to 14 day trek, and one of the few options in Nepal at the height of the monsoon season, since it traverses a high altitude desert landscape in the rain shadow of Annapurna. It takes you into the formerly closed Kingdom of Lo, and it's medieval mud-walled capital, Lo-mantang. The landscape is at a vast scale, sparsely populated, and with few tourists, partly because it is strenuous to get there, and partly because the $500 permit fee keeps many out. That is all likely to change in the next few years, as a major road is being built from India to Tibet, through the valley. This is a marvel of twisting, precarious engineering, but rather spoils at least one day of the trek, when the foot trail completely disappears. The unique Tibetan culture of upper Mustang is also likely to be diluted as a result of the influx of goods and people, but for now it is still an amazing place.”
A
5 - Excellent
Wonderful Group Trek
“The Unique Adventures guides and porters made the trip possible and amazing. They became friends almost immediately. The trip provides almost everything for you, which makes it easy to focus on the scenery and fellow trekkers. I went during the summer and experienced little rain, however there were also no mountain views. The trek is mostly along jeep roads which is something to be aware of. The towns and monasteries are the highlights of the trek. You experience so much of the Nepal/Tibetan culture. Tea houses were cozy and had surprisingly many amenities (hot showers, clean water, comfy mattresses). All in all was a great experience!”
L
4 - Very Good
Don't miss out on this area
“We did a 3 prs trek in april-may 2018 from Jomsom to Lo Mantang and back. Wonderful area to experience after 4 previous treks in the more eastern part of Nepal and high altitude landscapes. This area is totally different to the landscape of Annapurna, Everest and Langtang and it was a great experience to broaden the perspectives and knowledge about Nepal by visiting this area. Roads are much less travled by tourists here in the upper part. However, the road construction has a major impact on the experience as a trekker. Can only recommend to ask your trekking company to find alternatives to the road where ever possible as the road is very dull and dusty to walk and also busy with heavy trucks morning and afternoon.
The larger expenses charged for visiting this area is well worth it. Tea-houses are good and lees busy than other areas and the culture has a different history than other valleys. Beautiful combination of apple fields, willow trees, corn and crops in well-kept farming and the last of horse caravan history in the area still around.
Don't miss out on this gem!”
Read more reviews
ITINERARY
Alt. in: ALTITUDE MAP
Expand All
WHAT'S INCLUDED OPTIONAL ADDONS (Available during check-out) WHAT'S EXCLUDED
Why Book with Bookmundi
What are customers saying about Bookmundi
Average Reviews

QUESTIONS AND ANSWERS Find answers to the most frequently asked questions about this tour.
Read more questions and answers
NEED HELP OR HAVE A QUESTION ABOUT THIS TOUR?
If you have any question about this tour or need help with planning a trip, please do not hesitate to get in touch with us. We're ready to help.
Get help
days 14 From US$ 1,550 See Group Discount
CHECK AVAILABILITY
Response Time: 1 hour Response Rate: 100% MAKE AN ENQUIRY