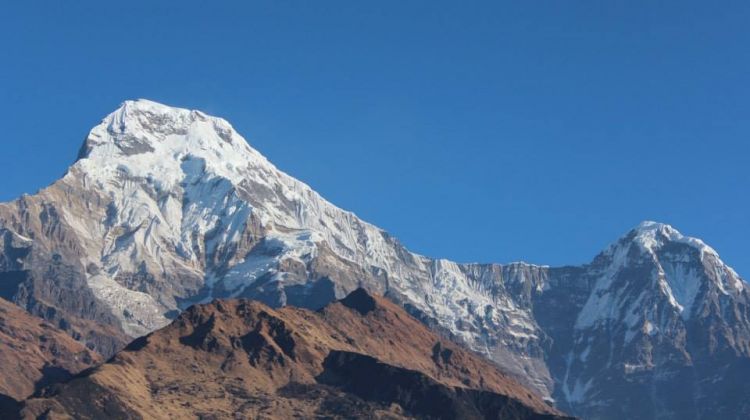 HIGHLIGHTS
Ghorepani Poonhill trekking also known as Annapurna balcony trekking is located in Annapurna region is of the most demanded and popular trekking trails. The trail to this trekking area offers spectacular mountain views from the hill top called Poon Hill (3210 m) which is one of the best panoramic view centers in the Annapurna region. From this place, one can see almost all the Himalayas lying in the areas such as Mt. Annapurna I (8091m), Annapurna II (7939m), Annapurna III (7555m), Annapurna IV (7525m), Mt. Dhaulagiri (8167m), Nilgiri (7041m), Fishtail (6998m), Hiunchuli (6441m), Lamjung Himal (6986m),Tukuche peak (6920m) among others, so as the unique landscapes in the area. One also can explore the charming settlement of diverse ethnic groups living in the areas namely of Gurung and Magars communities.

This is one of the easiest and the most demanding and visited trekking trails in Annapurna region. The trekking to this area begins from Pokhara via Nayapul, the trail continues along with Modi Khola to Birethati and climbs up via Tikhedunga Ulleri to Ghorepani, from here one can see the sunrise over the Himalayas and also the panoramic views of dozens of Himalayas, along the trails one can also explore the various kinds of butter flies, enjoy with the blend of culture and traditions of various ethnic groups such as Bramin ,Chhetri, Magar, Thakali, and gurung, After making final excursion to the Gorepani, Poon Hill, the trail takes back to Pokhara and return back to Kathmandu.
View More
CUSTOMER REVIEWS
5 - Excellent
Based on 3 reviews
Excellent service !
5 - Excellent
“We Just finished our 5-day trek to Poon Hill Trekking. our guide, Raman was super helpful and made everything as comfortable as possible on the mountain.
Mr. Laxman Aryal company owner did excellent work. Adventure Bound provided us best service we had a really wonderful experience. We will trek with them again and absolutely recommend others to choose them for their Service .”
super amazing
5 - Excellent
“fantastic experience, being in the mountains for a week was kind of recharge the batteries to get back to our 'jungle' life in the cities”
Poonhill trek
4.5 - Excellent
“It was all very good organized. We could just relax and didn't have to worry.”
ITINERARY
Alt. in: ALTITUDE MAP
Expand All
WHAT'S INCLUDED OPTIONAL ADDONS (Available during check-out) WHAT'S EXCLUDED
Why Book with Bookmundi
What are customers saying about Bookmundi
Excellent
4.71 Average 318 Reviews

QUESTIONS AND ANSWERS Find answers to the most frequently asked questions about this tour.
Read more questions and answers
NEED HELP OR HAVE A QUESTION ABOUT THIS TOUR?
If you have any question about this tour or need help with planning a trip, please do not hesitate to get in touch with us. We're ready to help.
Get help
days 06 From US$ 545 See Group Discount
CHECK AVAILABILITY
Response Time: 3 hours Response Rate: 100% MAKE AN ENQUIRY