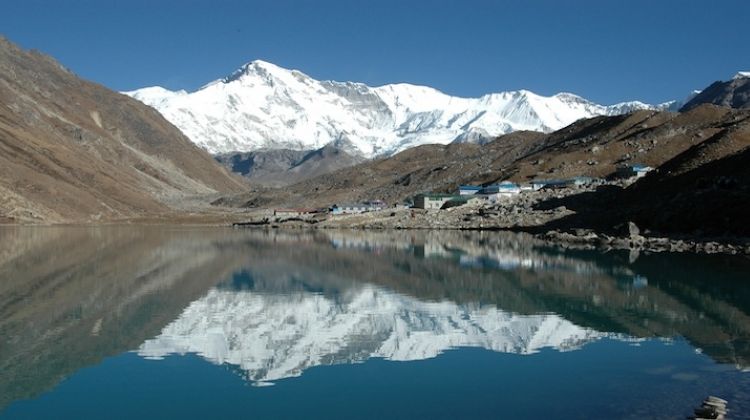 HIGHLIGHTS
A spectacular Himalayan experience for adventure seekers, the Everest - Gokyo Lake is a renowned trek in the upper reaches of the Khumbu Valley. The Gokyo Lake trek is famous for the beautiful Himalayan scenery it offers, including many spectacular Himalayan giants overlooking the trekking trail and the biggest glaciers of Nepal, one of which is the Gokyo lake itself. The trek offers amazing views of Mt. Everest, the tallest mountain peak in the world. This trekking trail is an alternative to the standard Everest Base Camp Trek. One highlight of this trek is the incredible view of the ice ridge between Mt. Cho Oyu and Gyachung.

The trekking trail has you walking through the natural habitat of Himalayan wildlife. Sagarmatha National Park, listed as a world heritage site, encompasses almost the entire Everest region, offers spectacular views of the high mountains, and is home to several different species of rare Himalayan flora and fauna, including musk deer, mountain goats, colorful pheasant, monal, and danfe - the national bird of Nepal. Endangered Himalayan species such as the beautiful red panda and the elusive snow leopard are also found here. Pine and birch trees are common, as well as colorful rhododendron flowers welcoming you with their bright red hue.

QUESTIONS AND ANSWERS Find answers to the most frequently asked questions about this tour.
Read more questions and answers
NEED HELP OR HAVE A QUESTION ABOUT THIS TOUR?
If you have any question about this tour or need help with planning a trip, please do not hesitate to get in touch with us. We're ready to help.
Get help
days 11 From US$ 1,100 See Group Discount
CHECK AVAILABILITY
Response Time: 3 hours Response Rate: 100% MAKE AN ENQUIRY