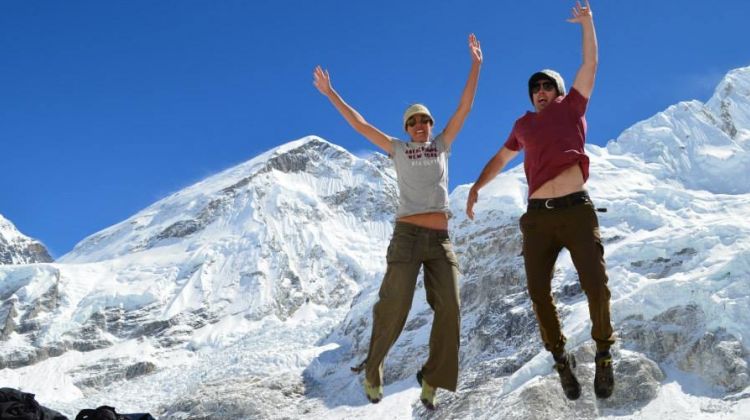 HIGHLIGHTS
The Three High Passes Trek (Renjo La, Cho La and Kongma La) is a picturesque trek in the Nepalese Himalayas, weaving through the Everest region over three of the world's highest passes. The trek offers unparalleled mountain scenery with an opportunity to explore the Khumbu region and the Everest Himalayan range. The Three Passes trek offers not only views of several eight thousand meter peaks, but also offers views of many peaks in the seven thousand meter club: including the region’s most beautiful Ama Dablam, Pumori, Cholatse, Khumbutse, Khangtega, Nuptse and Lhotse. The Three Passes trek is well-worth the effort, because of the amazing views and unforgettable experience of crossing three high Himalayan passes. This itinerary is developed for trekkers who are looking for an adventurous and challenging mountain excursion.

On the Three Passes Trek you will observe the ancient culture of the Sherpa people. The trail passes through traditional villages where Buddhist monasteries, prayer wheels, and monuments abound. Sagarmatha National Park, home to a variety of wildlife including musk deer, blue sheep, Himalayan tahr, barking deer, blood pheasant, Tibetan snow-cock, crimson-horned pheasant, and domesticated yaks, is a highlight of the region. A major attraction of this trek is Everest Base Camp at an elevation of 5340 m. Other worthwhile attractions are Kalapathar 5545 m near Gorak Shep, and Gokyo Ri 5350 m near Gokyo for the most spectacular views of Everest.

In short, it's an adventure trek of a lifetime and we look really much forward to taking your on this fantastic adventure, in a very safe, but adventurous manner!
View More
CUSTOMER REVIEWS
5 - Excellent
Based on 35 reviews
R
5 - Excellent
Green Valley is a gem, Raj is an amazing coordinator, and Bisho is a superb guide
“I chose Green Valley Treks when it came to booking my EBC + High passes trek in April 2021and boy am I glad I did that!! In summary, they have more than earned my highest recommendation.Raj, the coordinator, was incredibly accommodating from the beginning and closely worked with my schedule and ever-changing COVID guidelines to help book my trip. I only had 9 days off from work, and was comfortable with my training, but the shortest trip offered by any other tour operator was over 12 days. However, with Raj, he created an individualized itinerary for me and assigned me a fit guide/porter duo to set me up for success. He even personally picked me up from the airport and dropped me off after I completed my trek. My flight to Lukla got cancelled due to the poor weather, and Raj diligently worked with me to organize a Jeep to Phaphlu and a private helicopter to Lukla the very next morning due to my already annotated trip.My guide, Bisho, was enthusiastic, friendly, and was proficient in English. He did everything in his power to ensure I was able to accomplish my goal of completing the EBC+High pass trek in 8 days; and simultaneously, have an enjoyable and memorable trip. He ensured he pointed out all the notable peaks during our week of clear skies, as well as the history and significance of Sherpa culture and Buddhist traditions. Although I pre-medicated with Diamox, I felt some signs of altitude sickness one evening in Lobuche due to our lack of acclimatization days. On that evening, Bisho played cards with me, offered to give me a head massage, and sang a beautiful Nepalese song. He was up-beat, thoughtful, and calm throughout the tripif you have the option to choose a guide, I would strongly recommend you ask for Bisho as he will not disappoint!My porter, Jit, was similarly wonderful and ensured he kept up with our ambitious pace. He acted as an assistant guide and helped out with ordering meals and ensured that I was well-taken care of. In summary, Green Valley Treks is an absolute gem amongst the 100s of tour coordinators offering the EBC +/- high passes trek. They have earned my highest recommendation, and I would highly recommend them to my family and friends!”
S
5 - Excellent
Amazing, tough but rewarding adventure
“Tshering guided us safely through the Himalayas for 3 weeks. He helped us acclimatize and pace ourselves, and was extremely knowledgeable as we traveled through the Himalayas.”
A
5 - Excellent
Fabulous trek!! Incredible mountains! Excellent Green Valley Trek Team
“Fabulous trek!! Incredible mountains! Excellent Green Valley Trek Team . Thanks Once again”
A
5 - Excellent
Excellent Trip of Everest
“from the beginning we had nice communication with the Owner Rajendra lamcihhane . He picked us up from the airport and explained in details what we can expect on the trek. Our Guide Sapta was excellent and gave us enough flexibility. I am again planning to visit Nepal to do another adventure and will definitely book with these Guys.”
Read more reviews
ITINERARY
Alt. in: ALTITUDE MAP
Expand All
WHAT'S INCLUDED OPTIONAL ADDONS (Available during check-out) WHAT'S EXCLUDED
Why Book with Bookmundi
What are customers saying about Bookmundi
Excellent
4.68 Average 345 Reviews

QUESTIONS AND ANSWERS Find answers to the most frequently asked questions about this tour.
Read more questions and answers
NEED HELP OR HAVE A QUESTION ABOUT THIS TOUR?
If you have any question about this tour or need help with planning a trip, please do not hesitate to get in touch with us. We're ready to help.
Get help
days 17 From US$ 1,295 See Group Discount
CHECK AVAILABILITY
Response Time: 2 hours Response Rate: 100% MAKE AN ENQUIRY