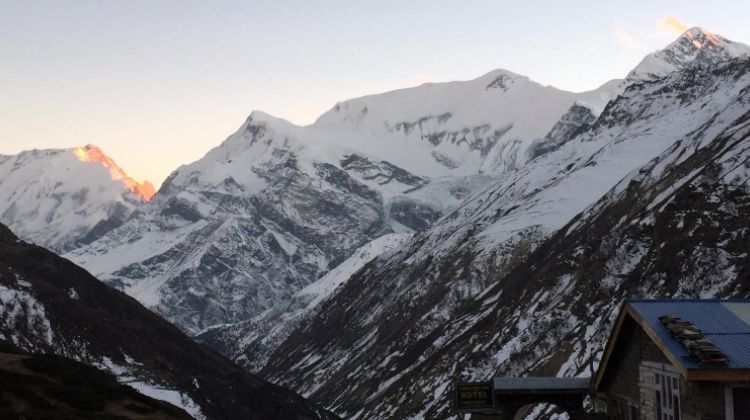 HIGHLIGHTS
The Annapurna Circuit Trek is a very popular trek in Nepal. The trail passes through villages inhabited by diverse ethnic groups, and offers spectacular mountain scenery from the far northern Himalayas to the Tibetan Plateau. A highlight of the Annapurna Circuit Trek is the Thorung La pass at 5416 m. Throughout the trek, you’ll be walking in the shadows of Himalayan giants, marvelling at the absolutely magnificent scenery.

The Annapurna Circuit Trek passes through lowland Brahmin and Chhetri villages to the remote village of Manang and also descends via the Kali Gandaki Gorge, the deepest gorge in the world. In addition to the normal trekking route, you will also trek over the Thorung La pass and add another layer of adventure to your trek.

The Annapurna Circuit trek offers an amazing panorama of snowy Mt. Manaslu (8187 m), Mt. Annapurna, Mt. Hiunchuli, Mt. Gangapurna, Mt. Nilgiri, Mt. Dhaulagiri, and many other Himalayan peaks. Another attraction of the Annapurna Circuit trek is the Tibetan village of Manang (3500 m) where you will be able to observe Buddhist monks worshipping at ancient monasteries in the area. Life in this region has remained almost unchanged throughout centuries.

A side trip from Manang, the trek also offers the icy Gangapurna Lake and the incredible natural paradise surrounding Gangapurna Glacier. The trail ascends from the Manang village over Thorung La Pass (5416 m), the highest point on the Annapurna Circuit Trek. From the pass, trekkers enjoy spectacular views of the Mustang peak, the snow-covered giant Mt. Dhaulagiri (8167 m), and the amazing lands of Upper Mustang, a restricted area. After crossing Thorung La Pass (5416 m) the trail descends to the Hindu Temple of Muktinath, a celebrated Hindu pilgrimage with 108 spring water taps and mysterious natural gas fires. The trail then descends along the edge of the Kali Gandaki valley to Jomsom, a major focal point for the Mustang District. From Jomsom, a 20 minute scenic flight takes you to another picturesque town, Pokhara, which offers many tourist sights.

People in reasonably good health can do the Annapurna Circuit trek comfortably. Trekkers slowly ascend the trail to allow for full acclimatization and optimum enjoyment of the Annapurna Circuit trek.
View More
CUSTOMER REVIEWS
5 - Excellent
Based on 19 reviews
More then just a Trekking Company
5 - Excellent
“Both Gopal and Porter were the best , They did all they could do for us to make the trip success.
The Management team was fantastic and help us for our gear , prepare the trip and even provided us farewell Dinner :)”
Excellent
5 - Excellent
“Excellent”
Mardi Himal Trek - April 2019
5 - Excellent
“The Annapurna region offers some of the most greenest scenery for trekkers. The view of the Annapurna mountain peaks are sublime and are quite visible from different places during the trek, making the overall experience even more enjoyable.”
Excellent service provided by Green Valley...will use again & highly recommend!
5 - Excellent
“Excellent service provided by Green Valley Nepal Treks Pvt Ltd...exctremely friendly and accomodating. Will use again & highly recommend!”
Read more reviews
ITINERARY
Alt. in: ALTITUDE MAP
Expand All
WHAT'S INCLUDED OPTIONAL ADDONS (Available during check-out) WHAT'S EXCLUDED
Why Book with Bookmundi
What are customers saying about Bookmundi
Excellent
4.71 Average 318 Reviews

QUESTIONS AND ANSWERS Find answers to the most frequently asked questions about this tour.
Read more questions and answers
NEED HELP OR HAVE A QUESTION ABOUT THIS TOUR?
If you have any question about this tour or need help with planning a trip, please do not hesitate to get in touch with us. We're ready to help.
Get help
days 13 From US$ 895 See Group Discount
CHECK AVAILABILITY
Response Time: 3 hours Response Rate: 100% MAKE AN ENQUIRY