Dominated by towering mountains, peaceful forests and snow-capped summits, Japan is considered to be one of the best countries for hiking in Asia. Popular with nature enthusiasts and outdoor sporting types alike, Japan’s varying landscape, climate and altitude allows hikers of all abilities to find their stride amidst glorious surroundings. Hiking in Japan might entail following in the footsteps of emperors on a long-distance pilgrimage route, tackling the sandy shores of southern Japan, or enjoying a short circular hike through lush green forest.

In this article, we list our picks of the top seven trails in Japan to hike in a day. We've included the best time to visit and the distance, duration and difficulty level of each route. You’ll also find our trail highlights and a few personalized tips to ensure you get the best out of each and every trail!

This trail runs between the villages of Magome and Tsumago in the Kiso Valley. The route follows the former Nakasendo route which once linked Tokyo with Kyoto during the Edo period and is a popular walking route with beginners and novices. The short and gentle path winds its way through forest, countryside and fields until arriving at Tsumago. If you’re carrying a heavy load, or just want to walk light, a baggage forwarding service is available from Magome, and you can have your bags waiting for you in Tsumago upon your arrival.

The Omotesando trail is one of many trails heading up Mount Takao, a mountain found in Meiji no Mori Takao Quasi-National Park, just an hour from Tokyo (take the express train from Shinjuku). The trail, also known as ‘Trail 1’ is the easiest of the six numbered trails that lead up the mountainside and is popular with visitors taking a trip to Tokyo. On a clear day, you can see Mount Fuji from the summit!

The Yoshida Trail is the most popular trail up Mount Fuji and is the easiest of the four routes up the iconic mountain. Starting at the Fuji-Subaru Line 5th Station in the Yamanashi Prefecture, this trail is ideal for beginner hikers and professionals alike, as long as you’ve acclimatized to the altitude. This trail is particularly known for the difference between the ascent and the descent – while the ascending trail is lined with huts and resting stops (including toilets and small cabins), the descent is spare, and it's recommended to head down in one go. Lots of people hike the Yoshida trail overnight to witness the sunrise from the top of Mount Fuji.

Suitable for beginner hikers and experienced walkers alike, the Mount Kintoki trail is a spectacular trekking route and one of the best hikes in Japan for viewing Mount Fuji from afar. Beginning from the Kintoki-jinja-iriguchi bus stop, the trail winds its way steadily upwards to the summit on a graveled and grassed path.

The Yamanobe no Michi trail dates back to the 8th century and follows a 1000-year-old road through the countryside, winding through farms and small towns as it goes. The path is popular with history buffs and culture vultures alike as it is dotted with shrines and temples and is considered to be an excellent cultural heritage walk. It’s also located in the Nara area of Japan which is home to numerous UNESCO World Heritage Sites. If you’ve got the time to explore the surrounding region we’d recommend doing so!

The Koyasan Choishi-michi trail is a pilgrimage route and one of the numerous trails that lead to Koyasan town. Starting from Jison-in Temple in Judoyama town, the route traverses 24km of ground through to Okunoin cemetery and the Diamon Gate. For those looking for a shorter walk, the trail can be taken from the Kami-Kosawa or Kii-Hosokawa stations as well. Along the route, you’ll find over 180 stone pillars that were built during the Kamakura period and are used by hikers as trail markers. This well-preserved trail is also surrounded by UNESCO World Heritage Sites and it is worth spending a day or two in Koyasan at the end of your trek to explore the surrounding area.

The Senjogahara Plateau trail begins in the town of Ryuzu-no-taki (just a bus ride away from the city of Nikko) and winds its way past Lake Chuzenji and along the Yukawa River. The route is quite spectacular and offers excellent views of the surrounding marshlands, mountains and Nikko National Park.

Ensure you’re fully prepared before embarking on your hiking adventure or joining a Japan walking tour. Consider both your fitness level and what to pack before you depart. Below we’ve provided a handy list of things you might need to pack before you hit up a hiking trail in Japan.

Few places so exquisitely manage to blend ancient architecture with incredible scenery better than Japan does, so strap on your walking boots and take them to the trails! When you’re hiking in Japan, don’t forget to research elevation and speed at which it increases to ensure you’re fit enough to handle the climb and make sure you pack the essentials. Whether you’ve opted for a one-hour stroll or a nine-hour hike, food, water, and extra clothing should always be packed. For ease in traveling around Japan, there are numerous Japan tours that cover excursions and provide in-depth itineraries. You can also contact our travel expert in Japan to make your travel plans stress free and simple!

Travelling to Japan? Chat with a local travel specialist in Japan who can help organize your trip. 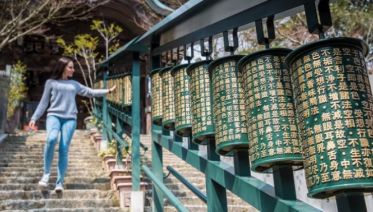 What to do in Japan

How Long to Spend in Japan

10 Days in Japan: Our Recommendations

Two Weeks in Japan: Our Recommendations