Breathtaking ruins, the seductive Mount Kilimanjaro, a fascinating culture and some of the best beaches in Africa, this is what travelers expect while heading for a trip to Tanzania. The country is famous for its captivating culture and excellent hospitality. In fact, the warm attitude of the locals is often one of the best experiences for most travelers visiting the country. And those enchanting beaches along the Indian Ocean coastline aren’t any pushover either. Dotted with ancient Swahili culture and historic villages, each beach has its own story to tell.

But that’s not why you go to Tanzania, or Africa for that matter. That’s not African adventures are all about! No sir. No way. You want beaches, go to the Caribbean, or better yet, explore Bora Bora. But when you visit Africa, you do what millions others before you have done and millions after you will do – you fall in love with its safaris.

Tanzania is home to the best safaris in Africa, and spending time with those hippos in its muddy waterways or the wildebeests in its plains, leaves you mesmerized with the true beauty of nature. Lazy crocodiles lay hungry eyes on you and the majestic lion tries to get a whiff of its newest prey. Chimpanzees accompany you along your journey to keep you company and the odd elephant wanders around its seasonal migration route without a care in the world. Yes sir, that’s what life is all about. That’s the reason why African tourism flourished. After all, the experience that these safaris have to offer, simply cannot be put down in words.

Tourism has continuously been on the rise since the early 2000s. The year 2011 saw as many as 843,000 tourists visiting to Tanzania, and this increased to 1,063,000 by the year 2013. Early 2015 saw a major slump in Tanzanian tourism because of the Ebola scare, but things are again starting to pick up for the country. Much of the tourism in Tanzania is claimed by its rich national parks and incredible safaris with more than 50% of the travelers entering the country choosing the Serengeti or the Ngorongoro Conservation Area over everything else.

To help you on your way, Bookmundi prepped this Wildlife Safari Guide, a guide that focuses on Tanzania and helps you understand what to expect and how to move forward.

The concept of safaris was born in East Africa, and no country comes close to offering the perfect safari experience of Kenya and Tanzania. Watching herds of wildebeests, giraffes and elephant against the backdrop of the Mount Kilimanjaro is perhaps the best view that Mother Nature has to offer. To top it off, you get to meet and interact with traditional Masai warriors guarding their villages and livestock and live in tents which overlook the glittery Savannah. Where else on the planet could you expect such wonders to come to life! The following are a select few reasons why Tanzania is the best destination for your wildlife safari adventures.

The presence of dozens of national parks in the country means that irrespective of your choice or your preference, irrespective of what you’re interested in seeing and irrespective of where you wish to stay during your safari, you have the best chance of tracking everything down in Tanzania.

It’s impossible to cover the entire country in a single trip. It’s just not done. With so many national parks to choose from and so much to cover, the only way is to choose a particular area and stick to it. To make things easier for its visitors, Tanzania has divided its wildlife experience into four safari circuits. These circuits were established due to the travel times and costs, and the easiest way to move from one circuit to the other is through scheduled or charter flights.

The type of wildlife adventures that this east African country has on offer cannot be fathomed anywhere else. The variety of animals found here in the open can only be seen in the top zoos around the world, and enjoying a safari in Tanzania feels like watching one of those Nat Geo documentaries on TV. Sure, you’ve heard of the Great Serengeti and its mysterious adventures, but Tanzania is about a lot more than simply visiting the Serengeti. Here are some of the top national parks to think about while visiting the country:

Without a doubt, the Great Migration dominates much of Tanzania’s wildlife safari adventures. While the migration takes an entire year to complete its course, its biggest highlights are restricted to specific seasons. This means that if you’re interested in watching the birthing of thousands of calves, you need to make your trip between the months of January to March. And if you wish to see those exotic river crossings, you need to visit the country between the months of July to August. While the northern circuits offer year-round adventures, those visiting the southern circuits would find better wildlife viewing opportunities during the dry season, i.e., the months of June to October.

Some countries are famous for their stringent visa requirements, which often leaves a bad aftertaste for travelers around the world. However, there are other destinations where getting a visa is a mere formality that needs to be completed. While Tanzania’s visa processes might not be a mere formality, they aren’t too difficult either. A visa can be obtained at any Consulate Mission or Diplomatic Mission of the United Republic of Tanzania and it usually takes one working day to get the visa. Tourists from select countries can also get single entry visas directly at the airport, subject to certain health and immigration requirements. There are two types of visas for tourists visiting Tanzania – the ordinary visa and the referred visa. A referred visa requires special clearance from the Principal Immigration Officer in Zanzibar or the Director of Immigration Officer in Dar es Salaam. However, this visa is required by tourists from selected countries such as Pakistan, Lebanon and Bangladesh and stateless people or refugees. All other visitors can apply for the ordinary tourist visa.

You need the following documents to apply for your Tanzania visa.

Remember to check with your mission whether they can process a visa for Tanzania. If not, they can always advise you on where to apply.

It is essential to get the right vaccinations before visiting the African continent. As long as you take basic preventive measures and ensure that you have these recommended vaccinations, you should be free from those exotic tropical diseases that Africa is famous for. The Center for Disease Control (CDC) recommends that you should be up-to-date with your typhoid, hepatitis A and rabies vaccinations in addition to the World Health Organization (WHO) recommended measles, hepatitis B, polio, tetanus, mumps, diphtheria and rubella vaccines.

Tanzania is well connected to most parts of the world and a number of airlines connect to the Julius Nyerere International Airport in Dar es Salaam. The Kilimanjaro International Airport is the best option for travelers covering Arusha and northern circuit safaris. The following section of this guide presents the best ways of getting to Tanzania’s best national parks.

You might also want to check out the Top 10 Best Things to Do in Tanzania for the heart-pumping adrenaline rushes and jaw-dropping sights followed by The Best Safari Destinations in Africa for the most exotic wildlife experiences that the continent offers to its guests.

As an ending note, here are the Top Travel Destinations in Africa to help you choose from wild untamed landscapes and bustling modern day cities, unimaginable beaches and exciting mountain treks, delicious cuisines and incredible adventures, and everything else you can possibly think of. 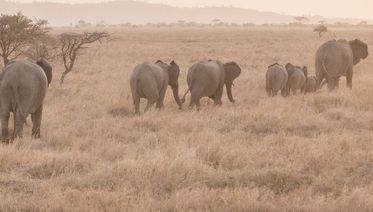