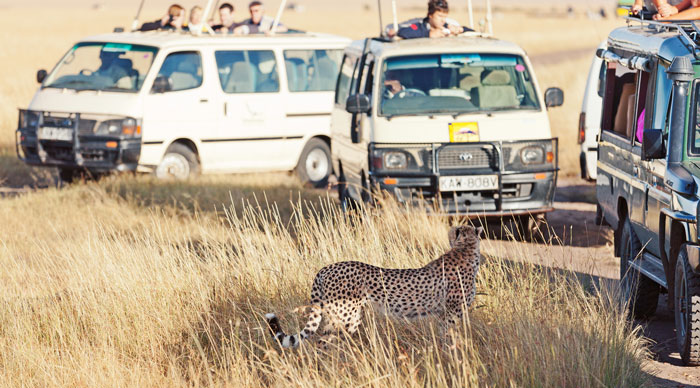 Spotting a majestic African lion on those glistening dunes, watching elephants bathe in mud under the scorching sun, following wild dogs on their hunting expeditions sharing a beach with exotic turtles, looking at the Great Migration from a hot air balloon – these are just some of the wildlife adventures that the African continent holds in store for you.

Famous for its incredible safaris, Africa has been attracting wildlife enthusiasts for decades with its vast national parks and game reserves. Bookmundi presents a list of the best safari destinations in Africa. This list includes some of the most exotic wildlife experiences that the continent offers to its guests – destinations are listed in arbitrary order as they are all great!

The Mara really doesn’t need any introduction. Famous as the most exotic safari destination in the world, Masai Mara is renowned for its dramatic game drives. It is the most visited national park in Africa and is home to the Big Five. The ideal time to visit Masai Mara is between the months of July to October, to catch a glimpse of the Great Migration, where millions of wildebeests trek across the continent in search of food and water. The Mara is one of those few destinations that lets you get close to a leopard, a pack of lions and a cheetah on the same day.

Your guide will urge you not to gawk at those mountain gorillas, but you find it to be an impossible task. These beasts may seem scary, but they have the gentlest and most mysterious eyes which somehow manage to put you at complete ease. The Bwindi Impenetrable Forest is home to half of the world’s population of mountain gorillas, making it one of the top wildlife destinations in the continent. Apart from its gorilla population, the area is also home to theatrical landscapes and as many as 23 species of endemic birds.

Turns out that you really cannot leave out South Africa from any to-do list of Africa. The country hosts all kinds of dramatic sights and locales, and easily competes with the rest of the continent in vying for the traveler’s attention. One of the biggest attractions of South Africa is the Kruger National Park, home to the Big Five and one of the finest game reserves in Africa. The diversity of mammals and the vegetation reminds you of the best parts of the Zambezi valley. The biggest advantage of choosing Kruger is that you get to see the very best of African wildlife without having to compromise on modern-day luxuries and luxe accommodations.

Another heavyweight in the wildlife scene of Africa is the Serengeti National Park. The park is considered to be one of the most prolific national parks in Africa and its sheer game viewing opportunities leave its visitors breathless. Approximately 250000 zebra and 1.5 million wildebeests migrate through the park each year while close to 3000 lions can be seen lazing along the outcrops in search for prey. And the Grumeti River ensures that you also have the largest collection of Nile crocodiles on the planet.

The Zambezi Valley may not be as famous as some of the other national parks on this list, but it is certainly every bit as amazing and spell-binding. There are very few destinations in Africa that feel as unspoiled as the valley and the sluggish pace of the Zambezi river manages to slow down the pace of life all along the valley. Zambezi is famous for its clear skies and starry nights and sleeping under that dreamy moonlight is perhaps the most peaceful and romantic feeling that you can ever experience. Watching clouds of white butterflies, stalking leopards as they stalk their prey, coming across herds of elephants, gliding by ancient-looking crocodiles – all in a day’s work at the Zambezi.

Some believe that Botswana’s lions are among the biggest in Africa. This certainly feels like the case when you come across those Tsaro and Skimmer prides in Duba. Duba is spread over 65000 acres in the Okavango Delta and road access is closed for most parts of the year. What makes a trip to Duba so different is that the lions here hunt during the day (psst… most prides of Africa prefer to hunt at night). So you can actually enjoy glimpses of these beasts in action as they take on each other for their prey.

The Ruaha National Park grows onto you with every day you spend in the park. If you feel that the Mara is wild, wait till you visit Ruaha. The park actually makes the Mara feel gentle, but therein lies its true charm. Its parched plains are littered with ancient baobabs and boulders and those sandy rivers attract lions that roar around your camp for hours at a stretch. The land feels placid during the day, but suddenly manages to transform itself into a glowing beauty as the sun goes down. African safaris really don’t get better than this!

The misty rainforests, ancient volcanoes, beautiful grasslands and serene lakes of the Volcanoes National Park make for ideal canoeing and trekking activities. The most famous residents of the park are those 350 odd mountain gorillas. As you move deeper into the park, large groups come into view and you can actually see the young ones wrestling with each other while the larger ones munch on shoots. They say that staring into the eyes of a silverback male is one of the most life-changing wildlife experiences on the planet. The beast is conscious of the presence of another individual and you really feel as if it is studying you the same way you’re trying to study it.

The Chobe National Park hosts the largest concentration of African game along the banks of a beautifully blue-colored river. Located within the Okavango Delta, Chobe is most famous for its Savute marsh, a place that is home to all kinds of lodges, is easily accessible and is teeming with wildlife throughout the year. The park is also home to a number of endangered species such as the brown hyena and the cheetah.

Planning an African safari? There are times when it helps to get someone to do all the hard work for you. After all, travel is supposed to be a pleasurable experience, not a major headache. Whether it’s Great Migration hot air balloon rides or exotic tours through the Kruger, Bookmundi has you covered with a wide range of reliable tours and comfortable activities to choose from. We cover most of the above best safari destinations in Africa!