Arenal Volcano is one of the most spectacular sights to see in on a Costa Rica tour. This giant stands at an impressive 1,657 meters tall and has been one of Costa Rica’s most active volcanoes in the past half century. But this doesn’t keep visitors from embarking on adventures to trek its lava-filled terrain located in La Fortuna.

The best time to visit the park is between February to April, for dry weather and your best chance to utilize the trails. Rains during other times of the year can make the trails treacherous and inaccessible.

Also leaving from the ranger station, the main lookout path is more of a sandy road. This trail takes you through forested and pastured areas to a lookout where you can view the remains of lava flows; a result of continuous eruptions that occured from 1968 to 1992. Viewing is limited to 20 minutes from the designated lookout. While this path is a popular option for walking, the road to the lookout may also be accessed via vehicle or on an Arenal Volcano hike tour.

Check out this day tour that takes you on a hike to Arenal Volcano's main lookout. 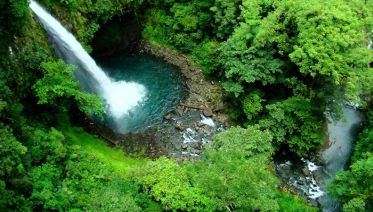 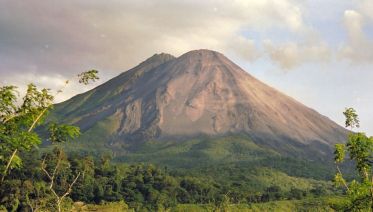 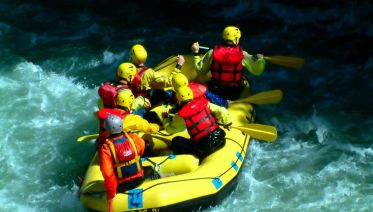 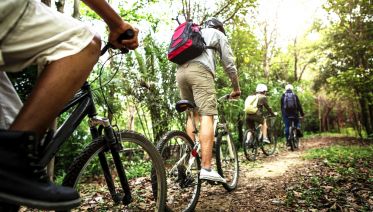 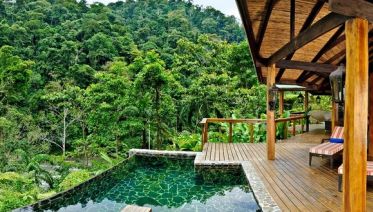 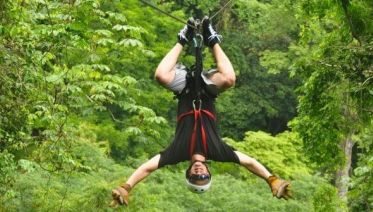 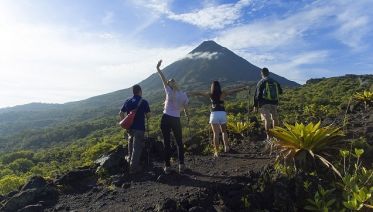 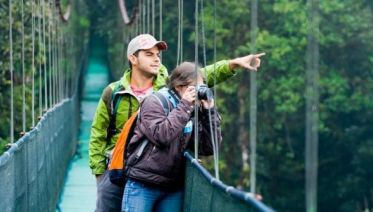 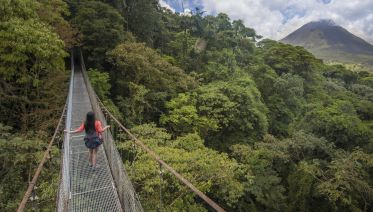 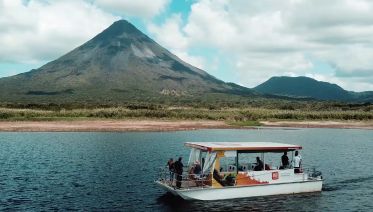 Los Heliconias trail offers a great introductory experience to Arenal Volcano National Park hiking. This narrow trail starts across from the ranger station and leads you to the connecting Las Coladas trail for a closer look at the volcano. Los Heliconias’ path navigates through lush, newer vegetation that has grown since the major eruption in 1968. It is easy to view wild orchids, butterflies and several bird species, including hummingbirds, magpie-jays, and oropendola. The trail also crosses with the Main Lookout path for an extension.

Los Miradores is aptly named, as it translates in Spanish to “the viewpoints.” From the park headquarters, the trail meanders along the peninsula giving breathtaking panoramas of both Arenal Volcano and Lake Arenal. Passing through rainforest, it eventually leads to the shores of Lake Arenal. Opportunities to spot birds and mammals can also be particularly good on this trail as it navigates between the volcanic and lake ecosystems.

This tour takes you on the Los Miradores trail.

Las Coladas is one of the top hiking trails in Arenal for getting up close and personal with the active volcano. The sandy trail starts at the ranger station passing through diverse vegetation with views of the Tilarán Mountain Range. The trail ends at the base of the volcano, where you can walk over the volcano’s old lava fields. You may hear the rumblings of geothermal activity. Again, for safety, viewing is limited to 20 minutes. Look around the old lava areas for unique orchids, lizards, and other habitants in this hotspot.

Further into the forest, El Ceibo trail is an extended loop trail that starts at and returns to Las Coladas trail. We recommend taking your time on this trail to appreciate the abundance of wildlife and plants found in this secondary forest. You don’t want to miss a photo opportunity with the massive Ceibo tree of over 400 years old, for which this trail is named for.

Los Tucanes is one of the longer Arenal hiking trails. It starts at the end of Las Coladas and loops through rainforest towards Rio Agua Caliente. There is an old lava trail extension halfway through the loop that eventually leads to Arenal Observatory Lodge. Check-in with the ranger station regarding accessibility before your hike as Los Tucanes is sometimes closed.

Hardcore hiking in Arenal Volcano National Park leads to the park’s lesser-known dormant volcano, Cerro Chato. The hike to this volcano’s crater is sure to leave you winded and sore from the climb, but if you dare, you can cool off with a refreshing once-in-a lifetime dip in the crater lake. With two possible entry ways, the trail from La Fortuna waterfall has in recent years been closed off due to erosion, while a trail from Arenal Observatory Lodge is typically more accessible.

The opportunity to explore the ecosystems and terrain of this volcanic region is an experience you will never forget. Be sure to plan a hike in Arenal Volcano National Park to enjoy one of Costa Rica’s most dramatic landscapes.

Note: Prices quoted are as per February 2018* 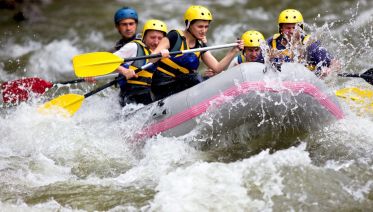 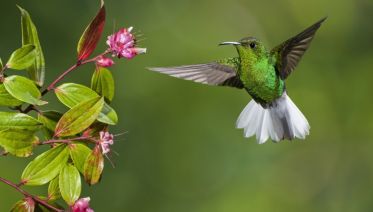 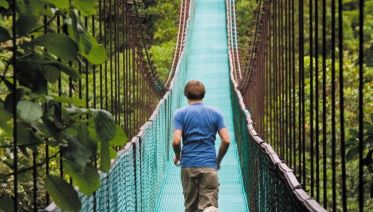 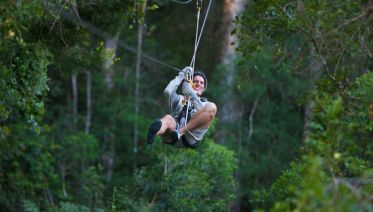 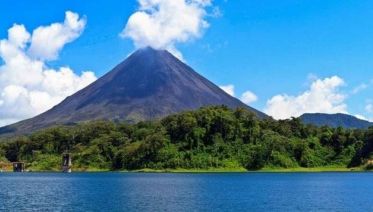 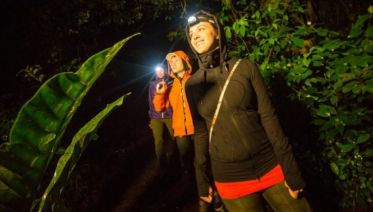 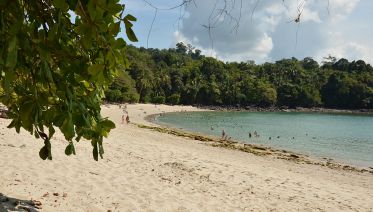 From the Caribbean Coast to the Pacific Side 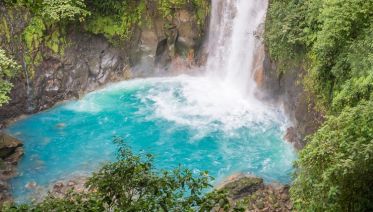 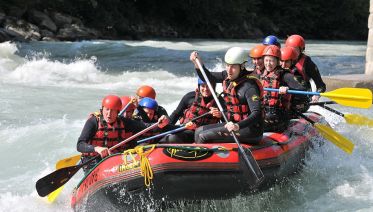 13 days From US$ 1,729 US$ 1,396
Previous Next
View all Arenal Volcano Tours
Create your custom-made trip to Costa Rica

Travelling to Costa Rica? Chat with a local travel specialist in Costa Rica who can help organize your trip.

View More
Published by Sofie on January 8, 2019
Tweet
0 Comments We welcome your questions or comments to this article. Our travel experts will respond within 48 hours.

Alberto Molina Travel Expert in Costa Rica
5.0 - Excellent
Customize a Trip to Costa Rica Chat with a local travel specialist who can help organize your trip
START HERE
Our travel experts are recommended by

What to Do in Costa Rica

Things to do in Costa Rica

With the greatest density of biodiversity in ...

Top Things to Do in San Jose, Costa Rica

Located in the very heart of Costa Rica, the ...

Things to do in Santa Teresa in Costa Rica

7 Things to Do in La Fortuna, Costa Rica

For years, La Fortuna in Costa Rica has been ...

Colourful, vibrant and cosmopolitan, the  ...

Best Ziplining in Costa Rica: Where to Go

Costa Rica has long been a feature on many tr ...

Things to Do in Jaco: Costa Rica’s Liveliest Beach

There is much more to do than just soak up th ...

Things to Do in and Near Liberia, Costa Rica

Top Things to Do in Cahuita, Costa Rica

Corcovado National Park: Things to Do

Whitewater rafting in Costa Rica is a thrilli ...

With its abundance of flat lowland coastal pa ...

What is the best way to combine a love for wa ...

How Long to Stay in Costa Rica

Although 5 days in Costa Rica may not sound l ...

Great Costa Rica Itineraries: How Many Days to Spend?

From sunning yourself on the alluring Caribbe ...

As the capital city and home to the country&r ...

Regarded by many as the jewel of Central Amer ...

With its pristine wilderness and excellent ec ...

With coastline on two oceans, the Central Ame ...

Whether you are staring spellbound at a titan ...

5 Volcanos in Costa Rica to Visit

If you think Costa Rica is nothing but beache ...

Fishing in Costa Rica: Where to Find the Best Catch

Costa Rica consistently takes the lead as one ...

Finding the perfect honeymoon destination to ...

For decades, surf enthusiasts have been ventu ...

There is a reason why Costa Rica welcomes ove ...

How to Get From San Jose to La Fortuna

One of the Costa Rica’s best-loved prot ...

Ecotourism in Costa Rica: 10 Ways to Experience it

When it comes to traveling sustainably, trave ...

In recent years, Costa Rica has established i ...

The rain-forested canopies and the remarkable ...

Tortuga Island in Costa Rica: Everything You Need to Know

Sarapiqui in Costa Rica: Adventure and Beyond

Long gone are the days when the Sarapiqui Riv ...

Playa Conchal in Costa Rica ranks as one of t ...

Picture yourself sitting on horseback, surrou ...

Tamarindo Beach in Costa Rica: Attractions and Things to do

Tamarindo Beach in Costa Rica serves up one o ...

The Caribbean coast of Costa Rica may not be ...

La Fortuna Waterfall: Everything you need to know

Rincón de la Vieja is one of the most ...

Imagine yourself on a tour in Costa ...

Looking for a quintessential adventure t ...

You may also want to see our tours and holidays in Costa Rica: