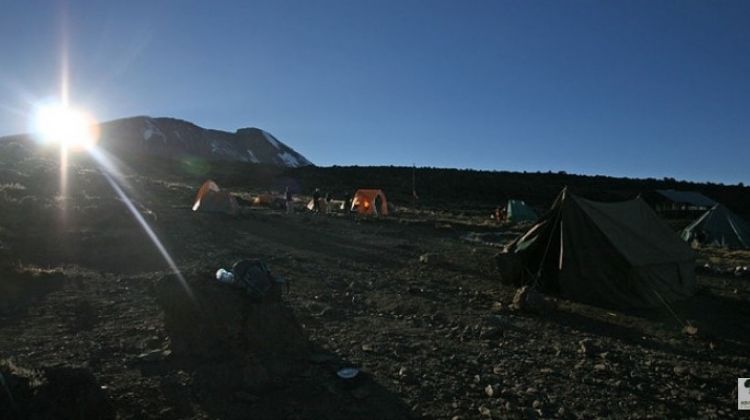 HIGHLIGHTS
Of the seven main routes used to climb Mount Kilimanjaro, the Machame route is the most popular route. It is the route of choice for many people because it provides impressive views and a variety of habitats. About 50% of all climbers, and most seasoned climbers, choose the Machame route.
The Machame route is also known as the Whiskey route, given its reputation for being a tough climb, in contrast to the easier Marangu route, which is known as the Coca Cola route. Unlike the gradual incline and hut accomodations found on the Marangu Route, the climbers on Machame hike steeper trails, for longer distances, and sleeping in tents.
The Machame Route climb can be done in a minimum of six days (five nights) on the mountain. However, it is most often tackled over seven days (six nights), for a better altitude acclimatization schedule. The trek begins at Machame Gate, located in the southern base of mountain, within its lush, fertile rainforest. The route heads toward the Shira Plateau, before circling along the southern circuit halfway around the mountain, exposing the climber to great views from all angles. The approach to the summit is made from the east, and the descent follows the Mweka trail.
The Machame Route is approximately 62 km/ 37 miles from gate to gate. It is designed for physically fit people with some hiking experience. The table below depicts a variation of the 7 day Machame climb with starting and finishing points, altitude, distance and hiking time. This is considered to be the ideal Machame route variation.
View More
CUSTOMER REVIEWS
3.5 - Very Good
Based on 3 reviews
R
1 - Very poor
CAREFUL ! NOVI TRAVEL ARE THIEFS
“Please be absolutely careful and do not work with NOVI TRAVEL TOUR, they are Thiefs !!”
A
5 - Excellent
Great Kilimanjaro experience - Machame route
“Great experience with Novi Travel & Tours! Organization was all perfect. Our head guide Filbert and his entire team were fantastic, they clearly knew what they were doing and that experience shone through the entire trek. Very professional, helpful, knowledgeable and competent.”
L
5 - Excellent
Kilimanjaro - Machame route
“My wife and I had an absolutely fantastic trek with Novi Travel & Tours to the top of Kilimanjaro. They customized our entire 8 day trip and helped assure all of our hard preparation work was fully rewarded when we reached our goal of Uhuru!

This was by far the most physically demanding and emotionally rewarding thing we have ever done!

Novi Travel & Tours came highly recommended to us by 2 friends who had taken separate treks with them. We agree that this is an exceptionally well handled Tanzanian company. The whole team was excellent and made our trek particularly memorable and fun with the enthusiastic singing and greetings by the team on several occasions. Other groups had greetings - but none were as frequent or as resonant as our Novi Travel & Tours team!

NEED HELP OR HAVE A QUESTION ABOUT THIS TOUR?
If you have any question about this tour or need help with planning a trip, please do not hesitate to get in touch with us. We're ready to help.
Get help
days 08 From US$ 1,800 See Group Discount
CHECK AVAILABILITY
Response Time: 3 hours Response Rate: 100% MAKE AN ENQUIRY