With its super-cool cities, endless coastline and extraordinary wildlife, Australia has all the elements needed for a superb vacation. It is a country of astounding beauty, from the beaches of the Whitsundays to the wild terrains of Tasmania, Cape Le Grand and the Kimberly. Scenic roads run through an interior of intriguing towns and landscapes. With so much to see and do, planning a trip to Australia can be overwhelming. Use our guide to help you.

Australia’s size means you are unlikely to see everything you want to during a single trip. However, most Australia vacation packages cover a couple of regions and a handful of cities at least. Here are some places you might want to add to the list:

Sydney: Sydney has iconic landmarks and a lively food scene, as well as beaches, islands and mountains only minutes from the city. Whether you are keen to climb the Sydney Harbour Bridge, spend a weekend at Hunter's Valley or would rather spend an afternoon in the Blue Mountains, Sydney has something for everyone — city lovers, foodies and nature geeks included.

Brisbane: Its modern galleries and festivals are perfect for culture lovers, but Brisbane has an outdoorsy vibe too. Adventurous types can paddleboard or kayak on the river, rock climb at Kangaroo Point Cliffs or visit nearby Moreton Island, which offers snorkelling, diving, surfing and even sandboarding. Brisbane is also a base for exploring the Great Barrier Reef, which can be reached in around four hours.

Melbourne: With its colourful street art and hipster coffee shops, Melbourne is considered Australia’s coolest city. Home to the National Gallery of Victoria as well as many small galleries, it is perfect for art lovers. Foodies will not be disappointed either. The city boasts a diverse range of restaurants, drinking spots and markets. Planning to drive the Great Ocean Road? The starting point is an hour and a half from the centre of Melbourne — making it a convenient centre of operations.

Adelaide: Adelaide is best known for its lively arts and music festivals including WOMADelaide and the Adelaide Fringe. With one of Australia's top wine regions, the Adelaide Hills, on the doorstep, it is also an ideal base for wine lovers. Nearby Kangaroo Island — a haven for wildlife where you can see many of the country’s endemic species — makes the perfect day trip.

Alice Springs: Best-known as the base from which to explore Uluru National Park, Alice Springs has a lot more to offer. This is the town where you can learn about Aboriginal culture and pick up some aboriginal art too. Outdoorsy-types will love hiking in the nearby West MacDonnell mountain ranges or Kings Canyon.

Gold Coast: Beach lovers should bump the Gold Coast to the top of their itineraries. As well as 35 miles of gorgeous beaches, this happening stretch of sand has surf vibes, a thriving culinary scene and plenty of craft beer flowing. The local neighbourhoods of Broadbeach, Burleigh, Coolangatta and Southport can be explored on foot or by bike, with plenty of stops in cool cafes along the way.

Perth: Perth is for beach lovers, with an amazing nineteen beaches on its doorstep where you can swim, snorkel and dive. Foodies will enjoy exploring the city’s neighbourhoods with their small bars and independent restaurants or visiting nearby Swan Valley, Australia's oldest wine region. Perth is crammed full of museums too, ensuring you won’t be bored. Cycling around Rottnest Island, with its 63 beaches, makes the perfect day trip.

Darwin: Surrounded by national parks including Kakadu and Litchfield, Darwin is a city for people who love nature and the outdoors. With exotic Asian food, palm trees, and tropical sunsets, this city has a different vibe from the rest of the state capitals. Chill out in the outdoor bars and restaurants, explore the markets, admire the colonial architecture or get up close to some crocs at Crocosaurus Cove.

Advice on when to visit Australia can be confusing; the country has four clearly defined seasons, but its size means that even within them, the weather can vary considerably. And remember: the north is closer to the equator than the south, meaning it's warmer.

For more information on when to visit Australia, check out our travel guide on the Best Time to Visit Australia.

Despite the size of the country and the long flight, a trip to Australia doesn't have to be especially lengthy. If you can cope with jet lag, you can see a great deal in two weeks. Most Australia itineraries are between seven days and three weeks long. Fourteen days is long enough to explore Sydney, Brisbane and the Gold Coast, or Sydney, Uluru and the Great Barrier Reef. In three weeks, you can overland from Perth to Darwin, or from Melbourne to Sydney. Five to ten weeks is time enough to explore either the east or west coast and overland through the outback via Alice Springs. In three months, you can see most of both coasts plus journey through the interior.

Of all the methods of travel around Australia, flying gets you where you want to go in the fastest time. There are plenty of domestic airlines offering good deals, including Qantas, Jetstar and Tiger Airways. Flying may be quick and convenient, but it is also expensive. Taking the bus is cheaper — and eco-friendlier. Domestic bus companies such as Greyhound offer hop-on-hop-off travel around the whole country. Train travel in Australia is another green option. A journey along one of the country’s scenic rail routes such as the Ghan or the Indian Pacific can be spectacular. If you want to stop at more remote spots, then driving is the answer. With a car, you can also drive one of Australia's iconic road trips such as the Great Ocean Road.

Traveling around Australia can be costly. Hotels and restaurants are as, if not more, expensive than those in Europe and North America. Drinks are not cheap either — Australians pay one of the highest alcohol taxes in the world. However, your most significant expense will undoubtedly be transport — the long distances will eat into your budget. Despite all this, Australia is renowned for being backpacker-friendly, and if you are happy to seek out budget options, you can keep costs down. Here are some examples of daily budgets:

All foreigners traveling to Australia must have a visa to enter the country. There are three types available:

Take some time to plan your trip to Australia properly — you’ll be going exactly where you want to, and you’ll spend less money and time getting from place to place. You’ll also be able to make those bucket-list experiences happen!

Published by Sofie, updated on May 13, 2021
Tweet
Create your custom-made trip to Australia 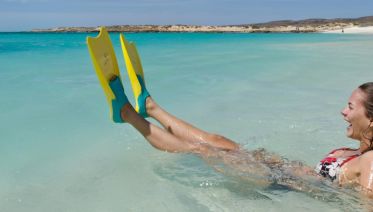 Perhaps the most iconic and memorable sight o ...

Top 9 Places to Visit in and Around Melbourne

8 Best Destinations in the Australian Outback

9 Best Places to Surf in Australia

12 Things to Do in Australia

5 Things to Do on a Great Barrier Reef Holiday

Inscribed as a UNESCO World Heritage Site in ...