Supporting Ukraine together. Check our homepage for further details.
Customize a trip to Holland Chat with a local travel specialist who can help organize your trip.
Start Here
Home   ›   Holland Tours   ›   Holland Travel Guide   ›   Best Things To Do in The Netherlands
Tweet

The kingdom of the Netherlands has been one of Europe’s great centers of arts and sciences for centuries, with the resulting treasures almost spilling from its world-class museums. Effortlessly managing to combine tradition and invention, you’ll find windmills and tulips, but also groundbreaking architecture and a progressive culture. You’ll never be short of things to do in the Netherlands with our top 12.

Stand for just a few moments on any street and you’ll soon realize how important cycling is to Dutch life. Mild weather, suitable infrastructure and a flat terrain makes the Netherlands perfect for cycling. With over 32,000 kilometers of bike paths spread across the country, biking is one of the best ways to get under the country’s skin, and bike rental schemes can be found in even the smallest towns.

Best time to visit: Cyclists will find the weather best between June and September.

Insider's tip: Make sure you get a local and flexible guide who knows about the city's history as well as knowing his way around some of the local bars. Biking is thirsty work after all.

While riding, always make sure you are extra careful at crossroads. The locals use bikes for everything, you don't want to collide with a bike loaded with a week's groceries because you didn't check both ways. – by Tasmin Foy, Bamba Experience

When it comes to what to see in the Netherlands, no visit can ignore the artistic heritage. Rembrandt, Van Gogh, Ver Meer and Frans Hals have all walked Amsterdam’s streets. From museums that showcase the artistic heritage of the Dutch spanning over 800 years to contemporary artists, Amsterdam remains one of the best places in the world to indulge in amazing artwork.

Best time to visit: Year-round. The museums are busiest in July and August, so try visiting them outside of this period for a slow-paced, personal experience.

Insider's tip: Planning on visiting a lot of museums in Amsterdam? Get a Holland Pass that helps you get free admissions, discounts, and cuts down costs significantly, not just for museums but also for public transportation and sightseeing.

Tours and Holidays in Holland
Previous Next
View all Holland Tours

Bedecked by pots overflowing with tumbling plants and spanned by myriad bridges, the Dutch canal network is one of the most popular attractions of the Netherlands. Built during the 17th century to transport goods, today, these waterways are as iconic to the Netherlands as tulips or wooden shoes. Cruise the canals across cities to get a true experience of the places. Taking a canal cruise is also a great way to get an overview of a city to pick places that you’d want to revisit later.

Best time to visit: July and August give the brightest weather for boat cruises.

Insider’s tip: Some canal cruises are adjustable, but most of them combine groups of people and use a generic route through Amsterdam. If you have specific spots in Amsterdam you’d like to visit or see, look for a canal cruise that offers private cruises that adjust their route to your preference and offer services including drinks and food as well. The Jordaan and Singel are great to cruise on as they represent the beauty and originality of the Amsterdam canals. – by Leah Lemmer, DamTours

Much like the canals, windmills are symbolic to Dutch history and make up a big part of the traditional Holland landscape. In fact, at one point in time, there were over 10,000 windmills across the Netherlands that were used for all kinds of industrial purposes like pumping water to grinding grains. Today, there are about one thousand windmills left. There is even a national holiday dedicated to the Dutch windmill heritage. A quintessential image of the country, visiting these historic windmills is a must-do while in the Netherlands.

Best time to visit: May to October, with the windmills operational on special occasions. Visit mid-May to witness the National Windmill Day that falls on the second Saturday and Sunday of May.

Insider’s tip: When visiting the Zaanse Schans, also notice the difference in the shades of the green houses. The darker the house, the richer the resident used to be. This is because the richer people could afford to maintain the façade of the building. – by Nathalie Van der Wal, Tour Company

For such a densely-populated country as the Netherlands, it’s surprisingly easy to get out into the countryside, whether that’s by bicycle, on foot, or by horse! There are several spots to visit that offer stunning flora and fauna and a chance to escape into the quiet, undisturbed nature.

Best time to visit: During summer from July to September. The deer of Hoge Veluwe are at their most active in late summer.

Insider’s tip: Most visitors don’t realise how easy it is to escape the cities for a quiet afternoon near Amsterdam. 23 minutes on the train from Amsterdam brings you to Overveen. From here, it’s just a 15-minute walk to Zuid-Kennemerland National Park, a spot popular with locals where you can enjoy rolling hills, sand dunes and forest strolls. – by Catherine Livesley, Euroventure

The Dutch have been in love with tulips since the 17th century when vast fortunes were spent on new bulb varieties. Every March, the country bursts into colors as vast fields of tulips start to bloom. Visit the Netherlands during spring from early March to May and catch the Tulip Mania as you visit numerous tulip gardens and witness flower parades in Amsterdam and Keukenhof, or visit the Tulip Museum. There are several ways to enjoy this flora and spring is the best time to visit.

Insider's tip: Being large fields where our farmers grow tulips, most tulip fields are open for guests. So drive along the tulip fields, make a stop and walk through the most beautiful, colourful fields and take some pictures, usually the farmers allow groups stopping by to walk through the fields and take pictures. The Keukenhof is open for just a certain period of the year and you have to pay an entrance fee. – by Lindsey Visscher, Tour Company

Any list of things to do in Holland must include a visit to the national seat of government in The Hague. Although not the capital, The Hague is home to the Cabinet of the Netherlands, the Supreme Court, the Council of the State and the UN’s International Court of Justice. With many governing institutions located in The Hague, the city has developed a refined culture with gourmet restaurants, cafes and an international community of expats while also being home to traditional churches dating back several centuries.

Best time to visit: The Hague can be visited at any time of the year, but visit in September to witness the ceremonial state opening of the Parliament.

Insider's tip:Try authentic Dutch raw herring at the Haringkram Binnenhof right next to the Dutch Parliament. If you are going for the Dutch way of eating this dish, sprinkle the fish with onion, hold the fish up by the tail and eat it upwards. But lookout for seagulls that are waiting to scoop down on a tasty snack.

The Netherlands hasn’t forgotten its traditional country roots, which never lie far from the pulsating life of its cities. Its countryside consists of windmills, villages filled with old wooden houses, and castles with stories of sieges. A refreshing getaway from the city, a visit to the countryside opens up a chance to explore the traditional Netherlands.

Best time to visit: Visit during Christmas season in December to coincide with the market which takes place in Valkenburg’s Velvet Caves Quarry

Insider's tip:The best way to get to Marken is by ferry from Volendam. The Volendam-Marken Express is available all year round, except during certain times in winter when the waters are frozen.

The mild-mannered Dutch aren’t afraid to scare themselves witless, and a visit to an amusement park uncovers another side to the Dutch psyche. There are quite a number of amusement parks to visit in the Netherlands which vary in size and attractions. Most amusement parks are located away from the cities, allowing for a great day trip.

Best time to visit: Visit during the spring and summer months from May to September.

Insider's tip:Visitors can download the Efteling app before going to the park. This app shows everything from how long one might have to wait in a queue for a ride to finding the shortest way to an attraction. An entire day's activity can be planned in advance with the help of the app.

Exploring the culinary heritage of the Netherlands is easy enough wherever you find yourself. From hearty pub snacks that go well with a pint of Belgian beer to raw herring or gooey waffles; delve deeper and learn the history of some of its most famous exports. And if there is one food you shouldn’t miss, get your hands on some of the most popular Dutch cheeses.

Best time to visit: If you can’t get over all that cheese, July and August sees a traditional cheese market take over Edam.

Insider's tip: No culinary adventure in Netherlands would be complete without a trip to De Foodhallen, Netherlands' first indoor food market in Amsterdam. It is open to visitors seven days a week and the restaurants here serve up everything from local delicacies to international cuisines.

There is also no shortage of things to see when it comes to all things scientific given the country’s fine engineering heritage. With awe-inspiring architecture and commercial buildings, modern living-spaces and unique structures, the Netherlands is home to some remarkable modern day and traditional engineering feats.

Best time to visit: April to October, which are the best months to visit in the Netherlands. July and August are peak seasons so the attractions might get a bit crowded.

Insider's tip: While visiting Rotterdam, marvel at this spectacular city of postmodern architecture from the Euromast, a 180m high tower built in 1960 that overlooks the entire city.

The Netherlands and its population suffered terribly during the Second World War. Though harrowing at times, it is a period that helped shaped the liberal-minded democracy of today. History buffs can visit some of the prime WWII locations of the Netherlands including the Anne Frank Haus, war museums, and battlefields where the great war was fought.

Insider's tip: To get more insight on the Second World War, follow the Liberation Route that covers the provinces of Gelderland, North-Brabant, Overijssel, Zeeland and Limburg. These provinces have a large network of audiospots marked by boulders that combine historical sites and personal stories that can be downloaded on a smartphone.

No visitor can ever claim to be short of things to do in the Netherlands. From visiting the nation’s historic gems, to sailing it city canals, or pedaling along its country cycle paths, the Netherlands has an irresistible charm that’s hard to beat.

Holland Tours
Previous Next
View all Holland Tours
Published by Sofie, updated on May 13, 2021
Tweet
Create your custom-made trip to Holland

Traveling to Holland? Chat with a local travel specialist in Holland who can help organize your trip. 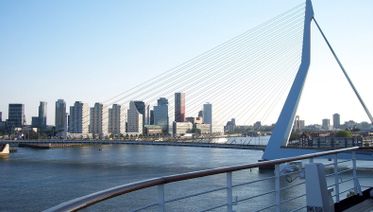 Holland is one of Europe’s favorite tra ...

Great Holland Itineraries: How many days to spend

Although people often associate Holland with ...

You may also want to see our tours and holidays in Holland: