Think of Lake Manyara as a baby safari, as an acclimatizing period before you go deal with the big boys. The natural beauty found here is second to none, but the game viewing opportunities in the area feel somewhat pale, especially when compared to the ones found in the Serengeti.

Lake Manyara covers 330 sq. kms., making it one of the smallest national parks in Africa, but its small size does nothing to prevent it from supporting as many as 11 ecosystems and offering countless experiences. This can also be attributed to its varying altitude, which ranges from 953 meters to 1,445 meters.

Animals are so easy to spot due to its size

Since roughly two-thirds of the park is covered by the lake, a majority of the animals can be found in concentrated areas, making animal sightings easy and pleasurable. Lake Manyara National Park gets the following relevant safari ratings.

Lake Manyara is most famous for its tree-climbing lions and thousands of flamingos, but it also hosts animals such as elephants, wildebeests, giraffes, buffalo, water bucks, impala, warthog, zebra, klipspringer, Kirk’s dik-dik and leopards. The park has a huge population of baboons as well, many of which rank among the largest in Africa.

Ever seen images of tree-climbing lions on acacia trees – that’s Manyara for you!

Lions can be found climbing trees in other parks as well, but it is somewhat of a specialty here. Checking out an entire pride of lions resting in an acacia tree is sure to be the best experience of your African safari. And if you happen to capture that on film, expect your Instagram account to go crazy within moments! Who knows, you might even end up winning one of those Instagram contests!

Easy access to night safaris and special camps inside the park

Game drives during the daytime have always been popular, but Lake Manyara is one of those few national parks in Africa to introduce night safaris as well as camps inside the park. This opens up a wealth of opportunities for adventure and nature lovers and presents activities such as mountain biking, village trips, hiking and trekking.

You’ve probably seen countless images of tree-climbing lions idling on picture-perfect acacia trees. You might have also seen images of thousands of pink lesser flamingos gracing a glittery lake. Chances are, most of those images belong to Lake Manyara.

Lake Manyara might be one of the smallest national parks in Tanzania, but it surely packs a punch in each safari. Sure, that traditional safari ‘feel’ might be missing here, but you cannot help from squealing in delight every time you pass a pod of hippos with egrets lazing on their backs, olive baboons, elephants, zebra, giraffe, buffalo, wildebeest and blue monkeys. And given the small size of the park, those squeals never seem to stop.

Birdlife is incredibly rich here as well. Lake Manyara hosts as many as 400 species and common sightings include huge flocks of flamingos, silvery-cheeked hornbills, bee-eaters and white pelicans.

This may be one of Tanzania’s more underrated parks, but its smaller size and more concentrated wildlife makes it an ideal destination for avid wildlife enthusiasts. Lake Manyara National park is a simplistic national park with one main route to navigate through, but don’t get fooled by its looks. It really is the perfect destination for those who have just started exploring wildlife enclosures. The following are just some of the highlights of Lake Manyara National Park.

Find out more about the top things to do in Lake Manyara National Park.

From over-the-top safari lodges and stunning private villas, to quaint tented camps and mid-range budget hotels, there is no shortage of places to stay at the Lake Manyara National Park. You can find something perfect in just about every region of the park, and on private reserves bordering the park, many of which take luxury and exclusivity to the next level.

The months of July to October see very little rainfall and are the best months to visit Lake Manyara and meet its animal population. However, if you love birds, canoeing and serene waterfalls, and don't mind tormenting rains, you would find the area to be much more attractive during the wet season, i.e., the months of November to June.

Most safaris to Lake Manyara start in Arusha, and also include Serengeti, Ngorongoro or both. Arusha is well-connected to the rest of the world by the Kilimanjaro International Airport, while Arusha Airport mostly serves regional and domestic passengers.

You can travel to Lake Manyara via road. Arusha is located at a distance of just 130 kms. (81 miles) and you can easily get to the park within three hours.

Tours and Holidays in Tanzania
Previous Next
View all Tanzania Tours
Published by Rasmus Juul Olsen, updated on May 5, 2021
Tweet
Create your custom-made trip to Tanzania 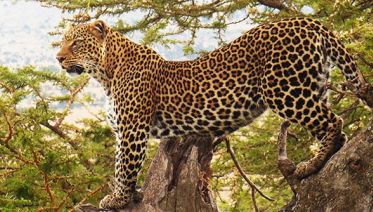