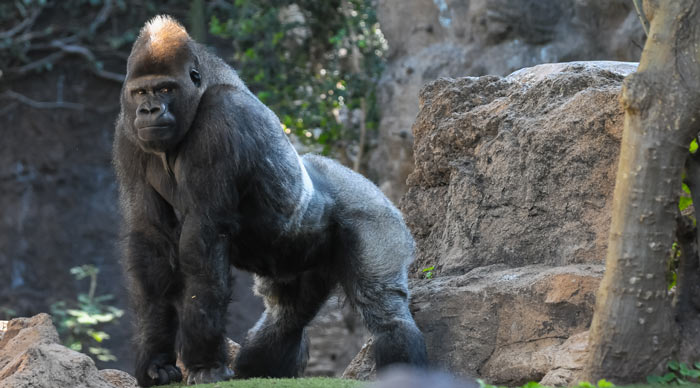 Walking for hours under the scorching sun drenched in your own sweat and having to stay away from the internet for long periods of time isn’t necessarily a bad thing. Ask anyone why was lucky enough to visit the jungles of Africa and you’d realize why they would be happy to do it all over again.

African safaris were romanticized by Ernest Hemmingway and they have been luring travelers to the continent ever since. Huge herds of elephants, tree-climbing lions, millions of game animals, exotic species of birds and stunning views are all yours for the taking in most national parks in Africa. However, there are a few national parks in Africa that go the extra mile by adding a touch of romance and exquisite lodgings to the bush experience. Today, Bookmundi introduces you to the top national parks in Africa, places so beautiful that they make you wonder why man had to leave the comforts of nature in the first place.

Your guide begs you to not stare at the mountain gorilla. You don’t mean to be rude, but you simply cannot comprehend what’s being told to you. For why would someone want to take away that experience from you! These giants are known to have mysterious eyes that can easily leave you transfixed. After all, you don’t expect animals to judge you based on first impressions, do you! If getting closer to a mountain gorilla excites you more than anything else, the Bwindi Impenetrable National Forest Reserve is where you need to be. This national park hosts more than half of the world’s population of mountain gorillas and its volcanic landscape presents the perfect backdrop to see these gentle giants and fall in love with the beauty of nature.

Spectacular natural beauty, breathtaking wildlife, game drives and rolling grasslands are iconic images that can be found in most national parks of Africa. So what is it that sets the Mara apart? This was the place which gave birth to the concept of safaris, and despite Kenya’s troubles in the past, this is one destination that never lost out on its visitors. What makes Maasai Mara so unique is that it is one of the only two national parks on the planet which host the Great Migration, a natural phenomenon which sees millions of zebras, buffalos and wildebeests make their annual pilgrimage in search of greener pastures, knowing that they must cross crocodile infested rivers and expose themselves to all sorts of predators in the process. The months of July to October host this phenomenon, and this is the best time to visit the Mara. Other highlights include Big Five sightings, cultural experiences with the Maasai tribe and luxurious accommodation.

Famous For: Combining modern-day comforts with the African bush

The Kruger National Park is one of the oldest national parks in Africa. This beautifully maintained park is visited by thousands of visitors each year as it presents everything you would want to see in an African safari and also lets you choose from award-winning lodges that easily beat many 5 star hotels in terms of their comforts and amenities. As one of the finest game reserves in the continent, Kruger is high on game animals and you can also see the Big Five in a single day at the Kruger. If you’re planning to go on a safari with a loved one, there’s no place you’d rather be.

Famous For: The Great Migration

If it’s not the Mara, it has to be the Serengeti. As the only other park hosting the Great Migration, Serengeti was always popular, but it could never keep up with the Mara’s celebrity status. However, like most celebs, the Mara soon became a victim of its own stardom, as its game drives began to feel crowded and lost out on their authentic bush vibe. This is where the Serengeti stepped in. While it’s more popular cousin was forced to host more and more visitors, the Serengeti treated its guests to unspoiled pastures and a sense of individuality that had certainly gone missing at the Mara. Apart from the 250000 odd wildebeest and zebra that migrate through the national park, you can also feast your eyes on the largest Nile crocodiles on the planet and some 3000 lions which can be seen lazing in those kopje outcrops. The Wildebeest Migration, is one of the “Seven New Wonders of the World” and also known as The World Cup of Wildlife.

Famous For: Lions that hunt during the day

When you see those mysterious and alluring images on NatGeo and dream of African safaris, you’re usually seeing the Duba in all its glory. NatGeo explorers Beverly and Dereck spent an entire decade at the national park filming the fight between lions and buffalos and their work has transformed Duba into one of the most coveted national parks of Africa. The Duba plains are believed to host the biggest lions of Africa. While that is not entirely true, the Tsaro and Skimmer lions found here are as big as they get. Both species were actually controlled by two male lions popularly known as the Duba Boys until their death. You could find lions in most national parks of Africa, but lions that hunt during the day is one of the most unusual sights you’ll ever see. The Duba lion doesn’t care about the sunlight though. It loves to show off its moves to the gasping travelers who are lucky enough to witness a kill.

When you think of the Great Kalahari, what’s the first thing that comes to mind? Is it the vast barren earth and desert dust, or is it those golden hues, beautiful acacia trees and all kinds of animals. Thousands of travelers prefer the desert adventure of the Kalahari over those lush green jungles for the simple reason that the scant water makes it easier to spot the area’s wildlife. Simply find your way to one of the few waterholes in the desert, and you’re sure to see all kinds of animals come by for a sip. Raptors and goshawks are some of the most obvious sightings here, but also watch out for the African hare, the jackal, the ostrich, the gemsbok and the springbok. There are a few intimate lodges to choose from and each trip is free of the crowds that usually spoil the top safaris in Africa. If you’re looking for a safari that takes you to the next level, all you gotta do is visit ‘the plains where courage fails’.

Ngorongoro Crater is one of the most compact wildlife destinations on earth. It’s huge crater walls prevented man from interacting with the area’s wildlife for a very long time and this allowed nature to run free here. Many of the animals found here didn’t have to suffer near extinction due to uncontrolled poaching, and as a result, you still get to see the black rhino as well as guaranteed sightings of the Big Five at the Ngorongoro. If you’re new to the concept of safaris, this ‘lost world’ has to be a must-visit destination in your itineraries.

Famous For: 9 species of lemurs

The fact that the Perinet Reserve is located in Madagascar is enough to make you want to visit. Madagascar is one of the most exotic wildlife destinations on the planet and many of the animals found here cannot be seen anywhere else. The ‘island of the moon’, a stunning landscape which has an uncanny resemblance to the surface of the moon, hosts roughly 80% of the area’s wildlife and this is where you see species such as giant lemurs and the giant indri and close to 100 species of birds, many of which have already been termed as endemic. Some of the most coveted bird sightings include the Madagascar long-eared owl, the Madagascar falcon and the Madagascar wagtail.

The Ethiopian wolf is among the rarest animals on earth, and more than 50% of the world’s population can be seen in the Bale Mountains. The rugged landscape makes it a haven for hikers and the area’s beautiful wildlife attracts safari junkies from all over the planet. Exploring the Harenna cloud forest also puts you closer to lions, spotted hyenas, hippos, mountain nyalas and leopards.

Its spectacular beauty, saltwater lake, concentrated game drives and excellent wildlife viewing opportunities makes Lake Nakuru different from most. Lake Nakuru National Park (Kenya) and Lake Natron National Park (Tanzania) are quite similar in terms of the experience they have to offer due to the simple reason that a saltwater lake covers two-thirds of the park, making it easy for you to spot the area’s wildlife, and also because of the millions of flamingos that visit both lakes. Some of the most common birds and animal sightings at Lake Nakuru include pearl-white pelicans, pink flamingos, baboons, colobus monkeys, rhinos, leopards and Rothschild giraffes.

Whether you’re more of a bird lover, an adrenaline junkie, a desert enthusiast, or a Big Five fan, we highly recommend to visit one or more of the above best national parks in Africa.

As an ending note, Bookmundi highly recommends you to check out our Africa theme to take a glance on the Africa of your dreams. It is incredible, magical, indescribable and all you can say is WOW!