Canada is a country that is often ignored in the international tourist market, even though it is full of adventurous opportunities and stunning scenery. From the cultural significance of the larger cities like Vancouver and Quebec, and the mind-blowing natural beauty of British Columbia, Canada has a lot to offer - you just need to know when to visit Canada to get the most out of the country. So, what is the ideal time for tourism, and what is the weather in Canada like? Read on to find out the best time to visit Canada!

If you want to know when to visit Canada, you have to think about what exactly you want to do. Canada is a huge country with a varied geography and climate, so there will always be something or another for you to do here, in any season. However, for most people, the best time to visit Canada is during the summer months. The warmer weather gives you many more opportunities to explore, and is ideal for road trips or exploring Canada’s wild landscape. The weather in summer is quite comfortable with often little to no rain, so if you wish to trek or go camping, the summertime is your best bet.

March to May is the spring season in Canada. The winter colds are over, and the heat slowly begins to rise, making the weather in Canada usually very pleasant during these months. However, watch out as this time can also be unpredictable — random snowfalls or cold rains are not unheard of in spring! Spring falls right before the peak season, so there won’t be as many tourists and the accommodation costs would also be lower.

The months of June to August are easily the peak season for tourists in Canada. The weather is beautiful and warm, and most places don't see a lot of rain. This is the best time to visit Canada if you want to stay outdoors and experience the wonderful Canadian landscape. Bigger cities will face a lot of rush, so if you want to visit Toronto’s beautiful museums, be prepared for large queues.

Fall is a beautiful season to be in the country. The weather in Canada is quite comfortable, though there might be some biting winds in certain areas. The colours begin to change all around the country. If you are a fan of fall colours, British Columbia, Nova Scotia, and Ontario have the most beautiful views in the months of September and October.

Winters can get rather ruthless, and might not be the best time to visit Canada. However, if you are visiting this country for snow, some winter sports action and a winter wonderland, this is easily the best time. The mountains get a thick blanket of snow, and the temperatures will drop quite low, so make sure you pack enough warm clothes. Except for the ski slopes, other hiking trails and tourist destinations will close down. Tourist spots in bigger cities will remain open, even during the winter, and promise an adventure unlike any other.

Tours and Holidays in Canada
Previous Next
View all Canada Tours
Published by Erik Jensen, updated on November 9, 2021
Tweet
Create your custom-made trip to Canada

Traveling to Canada? Chat with a local travel specialist in Canada who can help organize your trip. 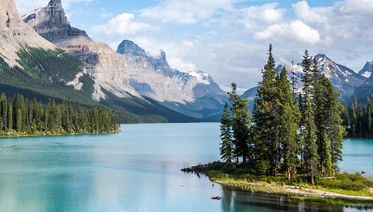 Great Canada Itineraries: How Many Days to Spend?

Canada is a destination that offers the trip ...