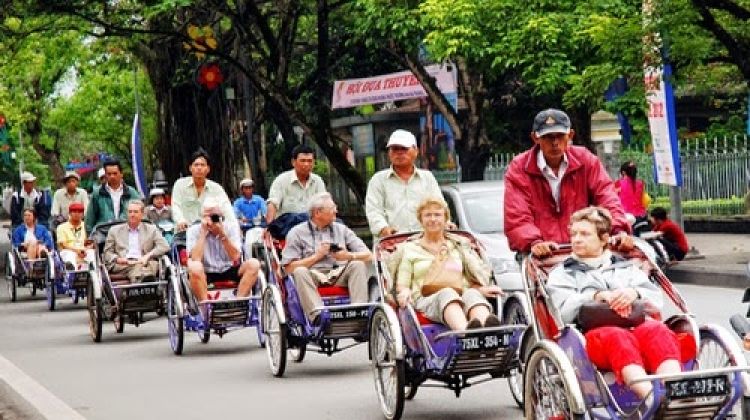 HIGHLIGHTS
Climb aboard a three-wheeled bicycle taxi in Hue – known as a "cyclo" – and experience the former imperial capital of the Nguyễn Dynasty via an iconic Vietnamese mode of transport. Vietnam’s version of the trishaw or cycle rickshaw, the 3-wheeled cycles are pedalled by a driver, with you in front!

In the morning, our Cyclo team will pick you up from your hotel and take a circle tour around Imperial City. Check out the central Flag Tower, then take a walk to discover the Imperial & Forbidden City, including the South Gate, Thai Hoa Harmony Supreme, the Royal Theater, The Mieu Temple and Nine Dynasty Urns.

Continue by car to Thien Mu Pagoda (also known as Heaven Fairy Lady Pagoda or Linh Mu Pagoda). This ancient site houses the most fascinating pagoda in Hue city. Return to the city by Dragon boat trip before heading to a local restaurant for lunch.

After lunch, continue the tour by exploring the King’s philosophy of geomancy and how this affected royal life. Visit the magnificent Minh Mang Tomb and see how the architectural design harmoniously blends with the natural surroundings.

The tour finishes at your hotel.

NEED HELP OR HAVE A QUESTION ABOUT THIS TOUR?
If you have any question about this tour or need help with planning a trip, please do not hesitate to get in touch with us. We're ready to help.
Get help
hours 08 From US$ 81 See Group Discount
CHECK AVAILABILITY
Response Time: 1 hour Response Rate: 100% MAKE AN ENQUIRY