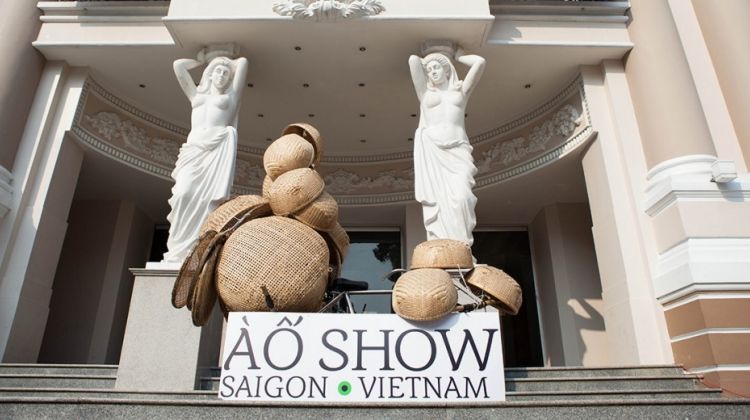 TOUR OVERVIEW
À Ố Show is a new kind of art performance commonly acknowledged globally as [new circus]. The show surpasses all the limits that was previously constructed by many other art shows in Vietnam over the years. the audience is offered the opportunity to let loose their imagination once they are set off by the visual creation and lighting of each performance.

The word “amazed” does not even begin to describe it the moment the audience see themselves walking on a small walkway of the sweet and breezy Southern Vietnam, wondering pass the surging dunes of the Southern Central only to find themselves ended up in front of a lotus swamp. Every now and then audience can hear echoes of a southern chanty and the traditional music of “Don Ca Tai Tu”. All the details that are portraited and recorded at the show reflect the spirit of the Vietnamese people and their heritage.

The chastity of bamboo, basket boat and its use in the daily life of many Vietnamese are leading visuals for the show. À Ố Show has no script, no climax and no sequence. During the 60 minutes of the show, the audience is gently introduced to many different tones of emotion as some may see flashes of their own reflection through the vivid yet poetical render.

À Ố Show may still be within the path of pursuing perfection but it does take pride in providing audience a one hour long of peace, comfort and serenity mixed with astonishment and joy. It is almost as if the audienceS were captured in a Vietnamese dream of life, survival, love and everything else in between.
View More
CUSTOMER REVIEWS
5 - Excellent
Based on 1 review
A
5 - Excellent
Teh Dar was a fab show, worthwhile seeing!
“The show was excellent, well executed, well rehearsed, beautiful visuals, lighting music and singing was of a good standard. All in all we had a great time. Thanks!!!”
WHAT'S INCLUDED WHAT'S EXCLUDED
Why Book with Bookmundi
What are customers saying about Bookmundi
Excellent
4.68 Average 348 Reviews

Other Practical Information• Confirmation will be received at time of booking • Minimum age is 5 years • Please arrive at least 30 minutes early to exchange your voucher for an entrance ticket at the ticket window • Weekday showtime is 6pm, weekend showtime is 8pm
NEED HELP OR HAVE A QUESTION ABOUT THIS TOUR?
If you have any question about this tour or need help with planning a trip, please do not hesitate to get in touch with us. We're ready to help.
Get help
hours 01 From US$ 28
CHECK AVAILABILITY
Response Time: 2 hours Response Rate: 100% MAKE AN ENQUIRY