Towering over the beautiful Indonesian island of Lombok is Mount Rinjani or Gunung Rinjani. At an incredible 3,726 m above sea level, this is the second highest active volcano in Indonesia. Trekking Mount Rinjani is only for those who are fit and somewhat brave, due to the difficult trail. However, trekkers who complete a Mount Rinjani trek are rewarded with stunning views of the island below.

Here is everything you need to know about undertaking a Mount Rinjani trek.

Trekking Mount Rinjani is a spectacular Indonesian experience, taking you across diverse landscapes as you climb the volcano towards its caldera above. The volcano's lowlands are covered in extremely fertile farmland, where you can see locals growing everything from rice and coffee to cotton and vanilla. As you gradually approach the highlands, you'll enter a less developed forest area with rocky, rich black soil. Near the top, you'll be delighted to find a world of colour, from the lush valley that dips into the caldera with vibrant green grass and purple flowers to the caldera itself, with its hot springs and bright turquoise Lake Segara Anak (meaning "child of the sea"). While you can't swim in this caldera lake, visitors often take a dip in the surrounding hot springs after a long day of trekking.

However, you must be quite physically fit if you wish to trek Mount Rinjani, as climbing this massive volcano takes several days and has a very steep incline at certain points (such as at the beginning and in the final 4 km stretch).

We recommend planning a 6-day itinerary as it will make the trek slightly easier and less demanding. Below is a day-by-day breakdown.

Start your trek off slowly by exploring the beauty of Lombok and the charming village of Sembalun Lawang before tackling the volcano itself. Most tour operators can arrange pickup for you from the Lombok airport, and from there it's about a three-hour drive to Sembalun Lawang where you can spend the night in a local hotel and rest up for the days ahead.

Today's the day! You start your Mount Rinjani trek early on day two, leaving your hotel around 7 am and heading to the Rinjani Trek Centre. There you (or your guide) will pay your park entrance fee and sign in the book. It is very important to sign your name in the event that something happens during your trek (like an eruption) authorities know who is on the volcano.

From the Rinjani Trek Centre, you'll start your way up the mountain. After about two hours you'll reach post 1, the first marked resting point that you'll pass on your trek. About four hours later you can stop at post 3, a common resting stop for lunch.

After lunch comes the trickiest part of the trek so far. The hill here is particularly high, and it will take you about three more hours to reach the Plawangan Sembalun Crater Rim (about 2639 metres above sea level). Here you can have dinner, set up camp and spend the night at the rim's campsite.

We hope you slept well because it's an even earlier morning today for those who want to see the view from Mount Rinjani's summit at sunrise. You'll have to wake up at about 3 am to enjoy a small breakfast before tackling the three to five-hour trek to the summit from the Plawangan Sembalun. Around 6 am, the sun begins to rise, shining light on your beautiful surroundings. You may even be able to see Bali's Mount Agung in the distance!

From there, you can return to your campsite at the Plawangan Sembalun Crater Rim for a heavier breakfast and a slight rest. It's another three to four-hour (downhill) trek to the beautiful Lake Segara Anak. Enjoy some lunch on the edge of the lake and take a dip in the nearby hot springs. At around 4 pm the sun will begin to set — an absolutely gorgeous view from this altitude. Make a campfire, experience the starry night sky, and pitch your tent for a night of well-deserved rest.

The fourth day of trekking Mount Rinjani is your chance to take things a bit easier. Sleep in until about 7 am today before hiking back up to the Plawangan Sembalun Crater Rim. You'll climb an altitude of about 650m in three hours, but then you get to relax at the crater rim's campsite for another night.

Back down you go! After enjoying a final breakfast at the Plawangan Sembalun Crater Rim, you'll start the five to six-hour descent to the village of Senaru. When you eventually reach Senaru, it's a great chance to see the village's twin waterfalls: Sendang Gile Waterfall and Tiu Kelep Waterfall. The entry to the waterfalls will cost about 10,000 IDR* (less than USD 1). After your visit, take a car to the nearby Teluk Nara Port (about 1.5 hours away), where you can take a 10-minute boat ride over to the island of Gili Trawangan. Spend the night on this peaceful island and enjoy views of Mount Rinjani in the distance.

Spend your morning and afternoon snorkelling off the coast of Gili Trawangan to see some of the best coral reefs and the most abundant sea life that Indonesia has to offer. Enjoy a delicious lunch on the beach before taking a boat back to the Lombok mainland where you can make your way to the airport (less than 2 hours drive from the port).

If you want to conquer three volcanos in Indonesia, particularly Mount Rinjani, Mount Bromo, and Mount Merbabu, then check out Indonesia Volcano Trek tour. If you are looking for an active tour that explores Mount Agung and Mount Rinjani, then the Bali & Lombok hike, bike & raft tour is for you.

Don't have six days to spare? Luckily there are plenty of alternatives for trekking Mount Rinjani.

The most popular option for Mount Rinjani trek is the 3-days / 2-night option. This allows you to see the summit, the crater lake and the volcano's hot springs following a similar itinerary to the above — but without the extra time to relax or the added benefits of seeing the villages and nearby Gili islands.

The trek can also be completed in two days but this is only recommended for those with high levels of fitness as there is very little resting time. If you leave early from Sembalun, you can actually reach the summit by sunrise. However, if you leave from Senaru you will only be able to reach the crater rim in a single day. On day two, you'll have to turn back and return to the village.

While our above 6-day itinerary starts in Sembalun village and ends in Senaru, you can do the trek in reverse — however, most tour guides and previous hikers recommend starting in Sembalun because of the way the trails are laid out. Both villages are on the northern side of the mountain, so they're not far from the popular beach resorts on the island's west coast.

If you book your trek through a tour agency, your agent will typically arrange your transportation for you. You could take a taxi from the Lombok airport, but both villages are about 3 hours away.

Alternatively, you can get to Lombok via Bali via a ferry from Padang Bai. The journey takes about 4.5 hours and costs about USD 3.30 per person. Faster boats are also available, taking about 2 hours and costing USD 18.30 per person. These boats will drop you off at the Lembar harbour, where you can take a 45-minute taxi ride to Sembalun (typically costing about or less than USD 3). Buses are also available for USD 1.10 per person.

If you wish to customize your Mount Rinjani trek then please send us a trip planner request and we will connect you with a travel expert who can do that for you. Time to kick it off of your bucket list, we say! 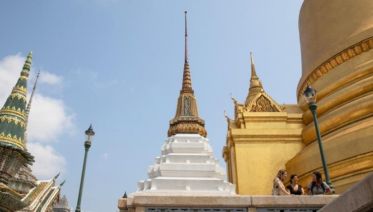