Perhaps the most iconic and memorable sight on Australia’s Great Ocean Road, the striated pinnacles of rock jutting out of the sea along the coast from Melbourne are a fitting testament to the natural beauty southern Australia has to offer. A roadtrip to 12 Apostles from Melbourne is a classic way to explore this area of coastline while on a tour to Australia.

Although only seven apostles can be seen today, a series of viewing platforms connected by wooden boardwalks wind their way around the cliff tops for the closest possible experience. Arrive as the sun sinks below the horizon and you’ll get not only phenomenal photographic opportunities, but also the chance to watch penguins returning from the waters after a day’s fishing to burrows beneath the main visitor lookout. 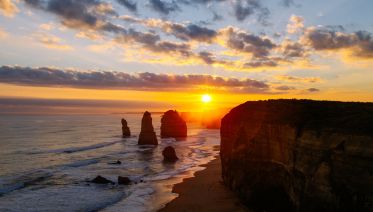 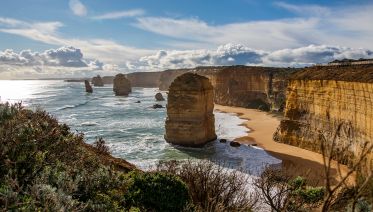 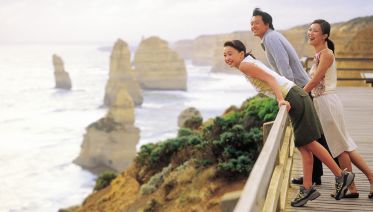 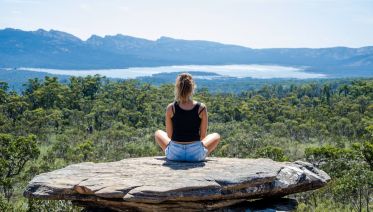 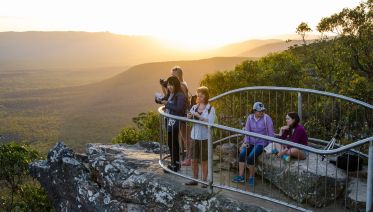 The Melbourne to 12 Apostles roadtrip can easily be completed as a day trip. The 4-hour, 275 km journey is never short of mesmerizing seascapes as you follow the Great Ocean Road west.

Leaving the suburbs of Melbourne head south-west around Port Phillip Bay towards the town of Geelong on the M1. Continue on to the coast at Torquay on the B100. After a total travelling time of around one hour and twenty minutes, this is where the spectacular Great Ocean Road begins.

Full of winding bends that hug the coast, much of the land the Great Ocean Road crosses is protected national park or wildlife reserve, giving you a sense of the flora and fauna of this corner of the Australian continent. The lighthouse at Split Point, where there’s a café for refreshments, offers grand views over the clifftop route the Great Ocean road takes. Two platforms at the end of a short walk offer the best views. It’s roughly 1.5 hours from Melbourne.

A man made attraction can be found at Carisbrook Creek, where thousands of ‘towers’ of pebbles piled on top of one another have been created by passing motorists to become a marvel of its own. Meanwhile Great Otway National Park, roughly 200 km from Melbourne, has some magnificent waterfalls.

From Great Otway National Park, drive 52 km to Princetown. Just 6 km away from the 12 Apostles, this small coastal village is home to a new boardwalk for viewing birds and kangaroos that inhabit the salt flats there. It also connects the town with a lovely picnic area should you want a further break from driving.

You then reach the jewel in the crown of any Great Ocean Road’s one day tour – the 12 Apostles themselves. Sunrise and sunset provide the broadest spectrum of colors over the seven remaining apostles, shaped by the wind and waves over centuries. The 1.1 km Great Ocean Walk follows a route from the south side of the 12 Apostles Visitor Center to beach level, the only place where a further two low pinnacles of rock known as Gog and Magog are visible.

Continue a little further west along the Great Ocean Road and you’ll quickly reach the beautiful coastal town of Port Campbell. Head to the High Viewpoint for spectacular views over the town and the local river as it makes its way to the ocean. Nearby you’ll find the rock formations of London Bridge arch, Loch Ard Gorge with its azure blue waters and two beaches, and The Grotto.

To return to Melbourne by an alternative route, take the meandering inland road. A shorter distance of just 240 km, it takes a little less time at around 3 hours, giving you more time at the 12 Apostles. But more than that, it gives you the opportunity to take in additional sights, such as Australia’s largest volcanic plain and the extinct volcano Mount Elephant, or even to extend your trip to undertake the 53 km long Ballarat Skipton Rail Trail walking route that passes through forest, rolling hills and historic goldfields. Who knows, you might find something glinting in the earth by your feet.

The 12 Apostles Melbourne roadtrip along the Great Ocean Road is a part of the Australian visitor experience as much as gazing out over Sydney harbor or cuddling a koala. Encompassing some of the finest ocean scenery the country has to offer, the 275 km route ends at the 12 Apostles — a panorama that simply takes the breath away. 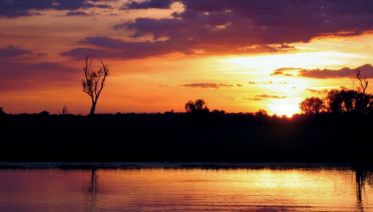 View More
Published by Sofie on June 18, 2018
Tweet
0 Comments We welcome your questions or comments to this article. Our travel experts will respond within 48 hours.

Planning a Trip to Australia: The Ultimate Guide

With its super-cool cities, endless coastline ...

Top Places to Visit in and Around Melbourne

Best Destinations in the Australian Outback

Best Places to Surf in Australia

Things to Do in Australia

Things to Do on a Great Barrier Reef Holiday

Inscribed as a UNESCO World Heritage Site in ...