Mustang, the former Himalayan kingdom, only opened for trekking in 1991, and is considered to be a last bastion of Tibetan culture. If you are looking for a very cultural trek having stunning treeless barren landscapes with yellow and grey rolling hills eroded by the wind, similar to the Tibetan Plateau, the Upper Mustang trek is a ... 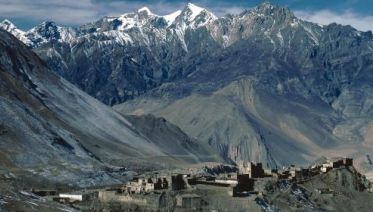 of 2 reviews
“A great trek with each day bringing new vast panoramas and ancient villages of Tibetan Buddhist buil ...”
days23 From US$ 4,320
SaveUS$ 216
View Tour
Next Departures
Showing 1 - 1 of 1 results
No results for your search criteria
Try clearing your filters to get more results
Create your custom-made trip to Nepal

5 - Excellent
Based on 25 customer reviews
Unforgetable trip
5 - Excellent
“Highly recommended the Himalayan trekking & Tour Company.we had a great experience on the trek with our excellent guide Babo and porters Raj, Chandra and Tangka. Thay helped us a lot along the journey. They kept encouraging me, without them and my tour partners, i am sure i couldn't accomplished the whole journey nicely.”
Very Good
4 - Very Good
“Very Good”
Great Guides - A shame that the Mustang Valley is under construction
4 - Very Good
“THE TOUR: We had chosen to shorten our total amount of days in the Mustang Valley, so we had a bit of a time pressure to both trek in and out of the valley in 9 days. Our great guides proved very helpful in doing this. The tour was a mix of homestays and we were very positively surprised by the level of service and offerings. The culture in the valley is intact and flourishing. The old ways are very much alive in here!

THE ONLY DOWNSIDE on the tour is that a road is being build cutting through the valley and up to Tibet. This road construction can at times be a nuisance and obstruct the beautiful views that otherwise exists on the path. I hope for the people of Mustang and trekkers that the old trekking roads that has given way for the new double lane road will be reconstructed higher up the mountain-slopes as that will increase the experience.

I can truly recommend this tour.”
Read More Reviews

Mustang, the former Himalayan kingdom, only opened for trekking in 1991, and is considered to be a last bastion of Tibetan culture. If you are looking for a very cultural trek having stunning treeless barren landscapes with yellow and grey rolling hills eroded by the wind, similar to the Tibetan Plateau, the Upper Mustang trek is a great option!

In common usage Mustang refers to the arid, Tibetan-like region, known to its inhabitants as Lo. Seven hundred years ago Mustang was a bustling place. It was a centre of Buddhist scholarship and art, and very likely the easiest connection between the salt deposits of Tibet and the cities of the Indian subcontinent.

The Mustang trek will take you through Upper Mustang, a restricted area, which previously only allowed some 200 trekkers through annually. While the trail is amazing, its rural and barren landscapes are also not for the faint hearted. The trek itself does not go to extremely high elevations and is not physically very tough, but relentless afternoon winds can be a challenge. Because of the winds and lack of sufficient water, camping will be done in villages, which are not always conveniently spaced. Some trekking days will thus be relatively long and others relatively short. These are, however, the conditions if you want to experience the starkly beautiful and highly cultural land of Mustang, a trek which is highly recommended.

All trekking agencies available at bookmundi.com take safety seriously and are assessed on their safety standards after every trek, via trekkers’ feedback. The trekking agencies will therefore go through safety procedures with you during your pre-trek meeting about the Mustang trek.