Legends of man-eating lions made Tsavo West National Park popular around the world in the early 19th century. Tales of how railway construction was halted abruptly in the year 1898 spread far and wide and the war between man and beast that lasted for 9 months soon became a bedtime tale, a story for the generations. ... 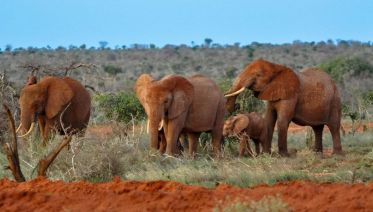 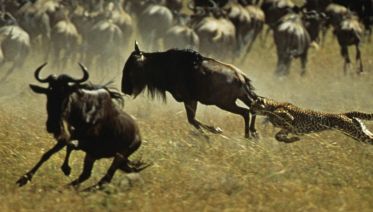 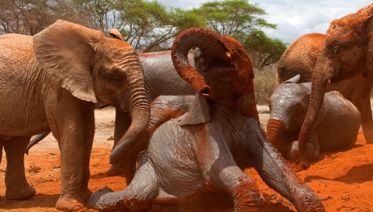 3 day wildlife safaris and game drives trip in Kenya, visiting Tsavo West National Park, Mombasa and Nairobi. Read More
days03 From US$ 650 View Tour
Next Departures
Showing 1 - 3 of 3 results
No results for your search criteria
Try clearing your filters to get more results
Create your custom-made trip to Kenya

Legends of man-eating lions made Tsavo West National Park popular around the world in the early 19th century. Tales of how railway construction was halted abruptly in the year 1898 spread far and wide and the war between man and beast that lasted for 9 months soon became a bedtime tale, a story for the generations.

With the war all but lost, the beasts retreated deep into the interiors of the park and widespread poaching in the late 1900s all but decimated the area’s wildlife. However, the national park has grown in leaps and bounds since and today, you get to see a spectacular diversity of wildlife here, minus the man-eating lions of course.

Tsavo West National Park is one of the largest national parks in Africa, a land that is full of natural springs, extinct volcano's, liquid lava flows, vast swamps, rolling plains, palm-fringed rivers and untouched sceneries. Stretching over 9065 sq. kms., Tsavo West demands your time. It presents dramatic sights, excellent animal sightings and exquisite lodges, but don’t come here expecting to see everything in a day. You need to be patient with the park due to its sheer size, and you can be rest assured that your patience shall be always rewarded with some of the best animal sightings on the continent.

Most safaris in Tsavo West National Park concentrate around a 1,000 sq. km area, the Developed Area. This area lies in the north and is home to some of the most well-watered soils and best landscapes that the national park has to offer. It hosts beautiful Savannah and woodland habitats and needless to say, animal sightings here are among the very best.

The star attraction at Tsavo West is Mzima Springs. Its crystal-clear water filters through the volcanic rocks and is full of huge pods of hippos, numerous crocodiles and large schools of fish. The world-famous underwater chamber which lets you see crocodiles and hippos from up close is also located here.

If the thought of liquid lava flows felt exciting, you must visit the Shetani Lava Flow, the largest lava flow in the park. You can explore the numerous lava caves below the surface and stumble across remains of prey animals as well as predators that were trapped inside.

Tsavo West National Park also hosts several volcanic cones, with the Chaimu Crater deserving special mention. This is a nature trail that allows you to leave the confines of your safari vehicle, stretch your legs, hike to the summit and enjoy majestic views of the Developed Area.

Visitors wouldn’t want to miss out on exploring the Poacher’s Lookout either. This wooded area takes you on a beautiful drive through a winding track and presents breathtaking slopes and special bush hikes. Tsavo West National Park is full of hilly landscapes and this means that spotting wildlife can often prove to be difficult, but don’t make the mistake of thinking that Tsavo West is lacking in terms of wildlife. There’s plenty to see here.

Some of the animals found in Tsavo West National Park include the lesser kudu, impala, gazelle, zebra, giraffe, rhino, buffalo, elephant, oryx, leopard, hyena, cheetah and the lion. A few lucky ones might also get to see the elusive black rhino. The park also presents beautiful birding opportunities and the white-headed buffalo weaver is one of the most noticeable species here. Lake Jipe is famous for being a paradise for bird lovers.

Lions Bluff Lodge is a mid-range safari lodge that is located at the very end of the ridge and is perfect for those interested in bush walks and night drives. For something more special, you don’t need to look further than Severin Safari Camp, a beautiful camp run by an enthusiastic German couple. Other options worth considering include Finch Hattons, Voyager Ziwani Safari Camp and Kilaguni Serena Lodge.

The months of June to September represent the best time to visit the Tsavo West National Park. January and February are equally hospitable. The temperature stays pleasant throughout the day and cool at night and the animals tend to roam in the open searching for greener pastures. Bird lovers have to visit Tsavo West between October to January. This is when most of the migratory birds visit the park.

The Tsavo West National Park is located very close to the Chyulu Gate and is a common addition to most Tsavo West itineraries. Tourists visiting this national park would also want to consider visiting Mombasa, located at a distance of 188 kms. from the Tsavo Gate or the Mtito Andei Gate.