A fascinating country at any time of year, China and its world-famous sights like the Great Wall near Beijing or Xian’s Terracotta Army, features prominently on many people’s travel wish lists. The most popular times to visit the country are spring and autumn but planning a trip during the winter months opens up several intriguing possibilities without the crowds. If that sounds like something you might be interested in, here are our top 7 destinations for winter in China.

The country’s vast territory means a wide range of climates and temperatures, but wintertime in China broadly corresponds with winter in Europe and North America. During that period, the far north is extremely cold, with temperatures dropping to -30° C and below. Beijing, however, is not quite as cold with daytime temperatures mostly hovering between freezing and -10° C between December and February.

Traditionally, heating is not installed in houses south of the Yangtze River. This certainly doesn’t mean it never gets cold down there, but November in Shanghai can often be t-shirt weather, and you will still see warm days during December and January. However, it has been know to snow, too.

As for other regions, the far south is mostly sub-tropical, Yunnan province is known for year-round mild weather and Hainan is a tropical island that boasts balmy weather throughout the year.

In short, there is huge variation from one end of the country to the other, but this means that whatever kind of vacation you want — whether it’s a skiing trip, a beach holiday or just about anything in between — it’s probably possible somewhere during winter in China.

Ready for the reveal? Here are seven of the best destinations to explore in China during winter.

Beijing’s winter may be long, cold and windy, but this is still a great time to visit the city. The best time is around the Spring Festival —which usually falls in January— when you can visit temple fairs and enjoy the Chinese New Year Celebrations. It doesn’t snow often but take warm clothes since temperatures can still be quite cool.

Tours in Beijing
Previous Next
View all Beijing Tours

Located in China’s northern Heilongjiang province, Harbin often sees quite chilly winter temperatures. Despite this, winter is the perfect time to visit since this is when the city hosts the International Snow and Ice Festival, which includes an ice sculpting competition as well as entertainment on the frozen river.

Tours in Harbin
Previous Next
View all Harbin Tours

China’s Yunnan province is known for its year-round mild weather, so you can visit the rice terraces in Yuanyang at any time. However, the months from December to February are when the terraces are flooded and at their most spectacular, making winter the best time to go.

For a winter sports holiday in China, Xiling, near the Sichuanese capital of Chengdu, is one of the country’s top picks. A white wonderland, it is sometimes possible to ski from mid-December until mid-March, but the best time to go is January and February.

Tours in Chengdu
Previous Next
View all Chengdu Tours

The inspiration for countless poems and ink paintings, the Yellow Mountain is arguably China’s most picturesque at any time of year — but to see it under a blanket of snow is something special indeed. In winter, it is cold and icy; an alternative to walking up is to ride the cable car for the breathtaking views from the top.

Tours in Huangshan
Previous Next
View all Huangshan Tours

Jiuzhaigou in Sichuan province is one of the most impossibly pretty locations in all of China, although it’s usually extremely busy. Winter transforms it into a scarcely believable fairyland of frost and ice, and with far fewer tourists, this could be an ideal time to visit.

Sanya, ‘China’s Hawaii’, is the main resort town on Hainan, the large tropical island in the Gulf of Tonkin across from Vietnam. Temperatures are warm year-round, and you will be in shorts and a t-shirt even in the depths of winter, making it the ideal destination if you’re craving a little winter sun.

If you want to see the most famous sights and visit the best-known attractions, travelling during the traditional tourist season might be advisable, although you will certainly not be alone. However, for anyone looking for a more unusual trip with activities not always associated with a holiday to China — along with lower prices and far fewer crowds — China winter tours are well worth considering.

Tours and Holidays in China
Previous Next
View all China Tours
Published by Marie Storm, updated on May 3, 2021
Tweet
Create your custom-made trip to China 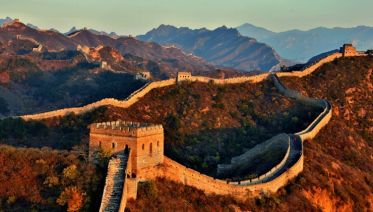