Iceland is definitely one of the world’s most beautiful countries, but one whose beauty remains tragically underappreciated. Each and every nook and cranny of this mesmerizing country has something special to offer. From serene fjords to majestic volcanic mountains, Iceland truly does have it all. Most people head to Iceland to see the spectacular Northern Lights, but to see those, you will have to consider the weather in Iceland. So what is the best time to visit Iceland? Let’s take a look!

The best time to visit Iceland depends on what you wish to do, and more specifically, on what your cold tolerance is. The country is close to the North Pole, making it incredibly chilly during the winter months. Even during the summer months, temperatures rarely rise above 62 °F / 16°C. From watching the Gullfoss Waterfall, visiting the Blue Lagoon, trekking volcanoes, riding Icelandic ponies, or renting a snowmobile, there are plenty of things for you to do in Iceland. You just have to make sure you do them at the right time.

The weather in Iceland is at its best during the summer months, that is between the months of June to August. The temperatures are higher, the days are much longer, and you even get to see the midnight sun. Evenings tend to be bright, and the sun doesn’t set in Northern Iceland, even into the late hours of the night.

The second best time to visit Iceland is during the shoulder months - May and September. The weather is pleasant enough to travel the country, and the crowds are lower due to the off-peak seasons. Hiking might depend on the weather though, as the mountain roads may be blocked due to early or late snowfall.

May is the beginning of the tourist season in Iceland. The weather gets slightly warmer as spring engulfs the land in its beauty and the skies start to clear up. Many trekking paths will open for the first time after winter, so you can enjoy a fresh trek into the best of nature. This is a good time to travel to the southern parts of Iceland and those outlying areas. There might still be some snowfall in the interior parts of the country though. The peak season rush would not have come to the country yet, so you will get cheaper deals and accommodation.

The summer is Iceland’s best season — it is warm, the days are always bright, and you can explore every nook and cranny of the country. Most trekking paths and hiking trails are open, and the mountain roads are accessible. However, you should keep in mind that this is the high season, so the prices will be higher, and all popular destinations will be somewhat crowded.

There is always something innately romantic about the fall season. In Iceland, this month is exceptionally beautiful. Most of the tourists would have left, leaving vast areas of the country free to explore. There might be a slight chill in the air as the winter season prepares its chilly onslaught, but it will be manageable. It is even possible for you to go hiking if that is what you want to do! The weather in Iceland is unpredictable though, so be cautious about trekking in the inland areas.

Winter in Iceland is a force to be reckoned with. The country is incredibly close to the Arctic Circle, and by the time October rolls around, this becomes rather obvious. The weather in Iceland can be too cold for anything to be done. This is obviously the low- season, and most mountain roads in the country are closed. That said, if your sole purpose is to watch the Northern Lights, or indulge in winter sports, this is the best time to visit Iceland.

Tours and Holidays in Iceland
Previous Next
View all Iceland Tours
Published by Marie Storm, updated on March 21, 2022
Tweet
Create your custom-made trip to Iceland 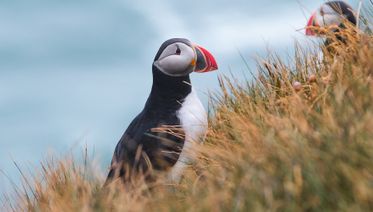