Beijing, the capital of China, boasts a vast array of sights and attractions for the visitor to enjoy. From the famed and iconic Forbidden City to the numerous palaces, temples and parks, there is no end of things to do in Beijing, a city with both a historic past as well as a vibrant present. Here, we’ve selected the top five attractions in Beijing to explore on any China tour, from the obvious to something a little different.

Tiananmen Square is both famous and infamous. Dwarfed by a portrait of Chairman Mao, the square sits in front of the Forbidden City. When considering what to do in Beijing the best place to start is here, surrounded by many of the city’s most famous sights.

The remains of China’s most famous revolutionary leader Chairman Mao reside in a low concrete building surrounded by statues of Chinese workers. The long lines of visitors coming to pay their respects and the important legacy which the leader left behind, make this an important site for the interested visitor and certainly one of the more unusual places to visit in Beijing.

Tours in Beijing
Previous Next
View all Beijing Tours

The workers cultural palace is generally agreed to be a quieter version of its forbidden cousin, with similar architecture and sights a visit here is a good antidote to the crowds swarming around the Forbidden City just a short walk away.

The fifty-four-foot-high statue of the Buddha is the main draw at this picturesque set of temples and pavilions set in beautiful landscaped grounds.

You’ll never get stuck wondering what to do in Beijing, but for something a little different why not visit the Olympic Park? Beijing hosted the 2008 Olympics and the opening ceremony was a remarkable showcase of China’s cultural and historical legacy. It is possible to visit the vast Olympic park and relive some of the memories of these spectacular games.

China takes immense pride in a wealth of fascinating places to visit and for all the right reasons. While it has its treasures spread all over the country, its capital city is its crown with no shortage. In a country so big, we’ve attempted to help you choose the top five attractions in Beijing, although there are innumerable sights and city tours still waiting to be discovered.

China Tours
Previous Next
View all China Tours
Published by Emma, updated on May 7, 2021
Tweet
Create your custom-made trip to China 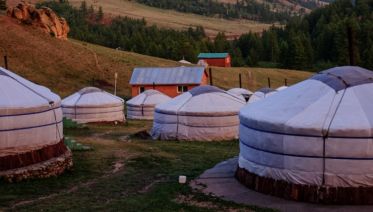