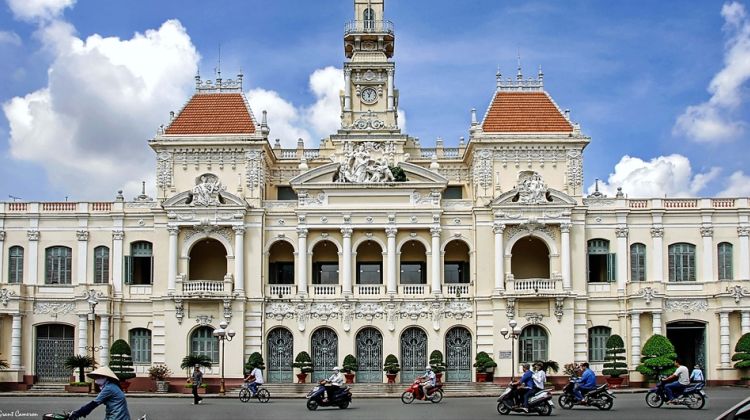 HIGHLIGHTS
You can select either morning or afternoon tour:

Morning:
Pick-up at your hotel in Saigon. Head to the exciting District 5, the area of Chinatown, to experience the bustling life of the city. Get into the rhythm of the busiest and most colorful area of Binh Tay market in the center of the district, and bypass Thien Hau Pagoda, shrines and shops of the district. The visit will end at the City Museum where exhibits describe a lot of the city history and current life. Return to the hotel at the end of the tour at midday.

Afternoon:
Pick-up at your hotel in Saigon. We will begin the trip at the one-century old Reunification Palace which witnessed both the growth of the city in peace and the fierce Vietnam War and its end in April 1975. Go on to the tranquil French colonial area nearby, including impressive Notre Dame Cathedral and the Old Central Post Office. Walk up the City Hall, located in the heart of the town, and from here visit Ben Thanh market – an incredible axis of District 1, the central district of the town. Return to the hotel at the end of the tour late afternoon.

Other Practical InformationChildren from 12yearold are considered adults for admission. Children from 211 pay 75% adult price, under 2 free
NEED HELP OR HAVE A QUESTION ABOUT THIS TOUR?
If you have any question about this tour or need help with planning a trip, please do not hesitate to get in touch with us. We're ready to help.
Get help
hours 04 From US$ 46
CHECK AVAILABILITY
Response Time: 1 hour Response Rate: 100% MAKE AN ENQUIRY