While South Korea is most well known for it’s addictive Korean drama series or it’s K-pop music, a lesser well-known secret is that South Korea has an ever-growing generation of cyclist! South Korea is actually one of the best countries in the world to explore by bicycle, and almost no one knows, not even cyclists! Whether you are looking for a short route nearby Seoul, or an end to end South Korea country-wide path, they have both of them.

South Korea has built massive cycling infrastructure in the past few decades, including a network of cross-country bike paths. You read that right, bike-only paths spanning the length of the country, a coastline, or across a scenic or challenging segment. These bike routes are a mix of well-maintained paths through parks and along rivers, quiet country trails, and small roads. The vast majority of the paths, barring mountain passes and remote areas, are car-free. This is one of the many reasons why South Korea should be added to your list of potential cycling destinations!

Here is a guide on the 5 best cycling trails in South Korea coupled with things you should know about the country and top travelling tips.

This is one of the best paths in the world with a dedicated cycling highway with multiple lanes and made just for bikes. It is one of the most challenging trails, though, as it runs all the way from the north west corner of South Korea to the south east corner spanning almost 600 km. While cycling the 4-Rivers Paths, a must-see place is the Sangiu Bicycle Museum which is seemingly in the middle of nowhere. This fun and interactive museum covers the history, culture, and technology of the bicycle in its entirety. Most of the museum is in Korean, but exhibits are interactive enough to understand the main points and have a good time!

There are so many great trails in South Korea, but to get the truly best cycling experience, the 4-Rivers trail is a must. Not only the length of the trail but the quality of trails and the amazing scenery you’ll find along the way is just another reason we find this one of the best in the world. While in Seoul, you have got to try these great street foods that will fill your belly but won't hurt your pockets!

While most times biking trails are found outside of cities in the sprawling countryside, you can’t always get out of the city to enjoy it. That’s why it’s great when cities create biking paths for those who need a quick fix during the work week like the Han River trail.

Whether you’re local or a tourist looking to get a little exercise while in Seoul, the Han River trail is a perfect way to spend a free day while still seeing all that the city has to offer.

While the mainland has many great paths, if you want to experience cycling on a beautiful island full of amazing beaches, then Jeju Island is definitely your cycling dream come true!

Of course you could always pick one of the trails closer to Seoul, but Jeju cycling trail is a unique pick because you can go from one tourist destination to the next as you circle around this tropical island.

Similar to the 4 Rivers trail, the East Coast Cycling trail is a cross country trip that will take you about 14 days to complete spanning from one end of the country to the other. This is by far one of the coolest trails in South Korea because you never leave the coast. There are times where you have mountains on the right and the ocean on the right and it’s so peaceful the whole ride.

This ultimate cross-country cycling trip is one of the best in the country and is great for those interested to learn more about South Korea’s landscape and rural village life.

This cycling trail isn’t for the weak hearted. If you are an avid cyclist then this rough cycling trail in South Korea will be a great challenge. The best part about this path is when you hit the peak, you can see the beauty of the South Korean countryside — all the way from Yangju to Seoul. Imagine that!

While this path may not be for everyone, adrenaline junkies will definitely enjoy a day bouncing around the hills of the Chilbongsan trail.

Late spring (March to May) and early autumn (September to November) have the best climate for bike travel. Winters (December to February) on the Korean Peninsula are bitter cold, and summers (June to August) are incredibly hot and humid, both unfavorable conditions for enjoying the country by bike! If you’re visiting in the spring, you’ll get a chance to see the cherry blossoms bloom, which happens about several weeks later than in Japan. In the fall you can catch the leaves changing.

Travelling to South Korea? Chat with a local travel specialist in South Korea who can help organize your trip. 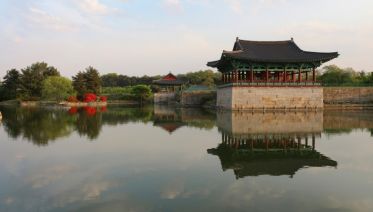 View More
11 Comments We welcome your questions or comments to this article. Our travel experts will respond within 48 hours.

Seoul is probably the best place in the count ...

Eating the local cuisine is one of the best w ...

South Korea Things To Do

16 Things To Do in South Korea

Have you ever dreamed of walking through an a ...

Things to Do in Seoul: Find the Hidden Gems

Visiting Seoul can be more than visiting the ...

South Korea is a unique country. One on hand, ...

How long to spend in South Korea

Great South Korea Itineraries: How Many Days to Spend?

You may also want to see our tours and holidays in South Korea: