You can never go wrong with a Cuban holiday. Whether you’re visiting those sun-swept beaches or admiring the wonderful Spanish architecture, Cuba is an ideal travel destination for your travel adventures. It is that one island that defied the rest of the world, and fascinated Ernest Hemingway (no small feat, indeed). To explore the country the way it is meant to be explored, you need to know the best time to visit Cuba. Weather in Cuba is great throughout the year, but there are other factors at play that determine when to visit Cuba. Read on to find out more!

From the magical charms of Trinidad to the white sand beaches of the Cuban Cayos, there are a thousand different things for you to do in this country. The best time to visit Cuba is during the dry sunny months. The weather is sunny without being too humid, and it is ideal for those who want to kick back and relax with a drink on the beach! If you are a beach bum, head to the coast between February and March, when the cool breeze has died down a bit and you can have a better sunbathing experience.

The wet season, between May to October is not the ideal time to visit Cuba, due to obvious reasons. Towards the end of the season, the weather in Cuba becomes rather unsteady, with a high possibility of hurricanes. However, between May and July, the weather is warm, and the showers are restricted to the afternoon. July and August are peak months due to the school holidays, so expect popular tourist destinations and the beaches to be crowded. This period is also hot and humid, so it isn’t the best time to visit Cuba. You’d be better of traveling in May or June.

If you want to know when to visit Cuba to have fun in the beaches and the mountains, this is the best time to do so. The weather is tropical, with little to no rain, and bearable heat. Unless you’re headed to the mountains, you won’t need to pack any warm clothes either. This is also the best time to visit Sancti Spritius and Trinidad. If you want to party in the beach, Varadero is particularly lively during this period, especially in December (make sure you visit Bellamar Caves when you’re there). For the more adventurous people, Cayo Largo, and Punta del Este beckon, with their amazing diving and snorkeling opportunities! If you would rather head to the mountains, the peculiarly shaped mountains at Viñales Valley, Artemisa, National Park Alejandro de Humboldt, and the hill resorts Soroa and Las Terrazas are ideal. If you are an avid bird watcher, head to the island’s highest point at the Gran Parque Nacional Sierra Maestra.

May and June are good months to travel in Cuba. The weather in Cuba during these months is still warm, but not too hot. The rains are usually afternoon showers, and won’t affect too much of your travel plans (just make sure you get out of the beach by afternoon). There is a dip in the accommodation and travel prices during this period, before it picks up in July and August. The months of July and August can also get unbearably hot, especially in cities like Havana, and in the eastern regions, like Santiago de Cuba, Granma, and Holguin. It is the school holiday season, so expect a lot of crowds in major beaches like Varadero and in places like Punta del Este. Some of the mountains and national parks might be difficult to access between August - October due to frequent hurricanes.

Tours and Holidays in Cuba
Previous Next
View all Cuba Tours
Published by Marie Storm, updated on June 11, 2021
Tweet
Create your custom-made trip to Cuba

Travelling to Cuba? Chat with a local travel specialist in Cuba who can help organize your trip. 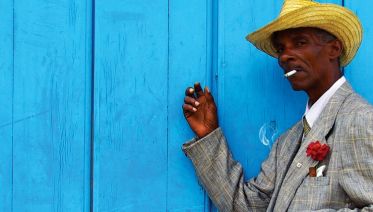 View More
0 Comments We welcome your questions or comments to this article. Our travel experts will respond within 48 hours.
Customize a Trip to Cuba Chat with a local travel specialist who can help organize your trip
START HERE
Our travel experts are recommended by

You may also want to see our tours and holidays in Cuba: