Central Asia still remains a mystery to travelers. Uzbekistan is one of the most enigmatic and beautiful of Central Asian countries, and an integral part of the historic silk route. Uzbekistan’s history, combined with its Soviet past results in an eclectic mixture of modernity and tradition. Explore the Silk Road beauty, and all the power of the old Soviet Union in one location. All you have to do is find out what is the best time to visit Uzbekistan and you’re good to go!

A lot of people do not realize the beauty of Uzbekistan, due to its tumultuous past as a Soviet Union territory. However, the moment you set foot into Uzbekistan, you will feel like you’ve stepped into a time capsule, one that can take you into the 6th century, when the country was at the crossroads of the Silk Route trade! The country has a lot to offer - you just have to focus on when to visit Uzbekistan!

The best time to visit Uzbekistan is during spring and fall. Between March - May, the weather is ideal for outdoor activities. The winter chill fades away, but the summer heat has not set in, so you will have the perfect temperature for your tourist benefit!

The weather in Uzbekistan from September - November is also pretty ideal, as it is the perfect fall weather. The oppressive heat of the summer, and the tourist crowds would have faded away, giving you the perfect opportunity for exploration!

Following the winter, the temperatures start rising around March, making the weather rather pleasant. The weather in Uzbekistan is warm, without being too hot, but in March, there is a high possibility of rainfall. The rainfall is not too high, so it will not hinder your plans, though. This is a shoulder season, so there won’t be too much of a footfall in the country.

While June is still bearable, the temperatures begin climbing up by July. July and August are the hottest months in Uzbekistan, and it gets incredibly humid and balmy. This is not the ideal time to visit the country, especially since you will not be able to go on any road trips when the sun is this strong. This is high season due to school holidays, and holidays in Europe, so expect a lot more tourists during this season.

By September, the summer heat starts to cool down. This period before the winter starts is one of the best times to visit Uzbekistan as the weather is stunning, and the crowds would have also dissipated. This is another shoulder season, so you won’t have to abide by a strict schedule!

Uzbekistan’s winters can be cold, but they are still mild compared to other countries in Central Asia. January and February are the coldest months, but even then, the temperatures do not drop too far below 0. Expect strong winds which will make the cold worse, though. However, this is a low season, which means you can get huge discounts!

Travelling to Uzbekistan? Chat with a local travel specialist in Uzbekistan who can help organize your trip. 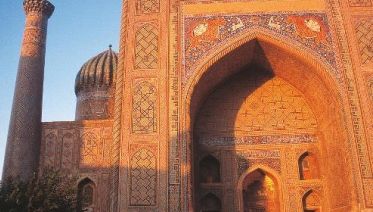 View More
0 Comments We welcome your questions or comments to this article. Our travel experts will respond within 48 hours.
Customize a Trip to Uzbekistan Chat with a local travel specialist who can help organize your trip
START HERE
Our travel experts are recommended by

You may also want to see our tours and holidays in Uzbekistan: