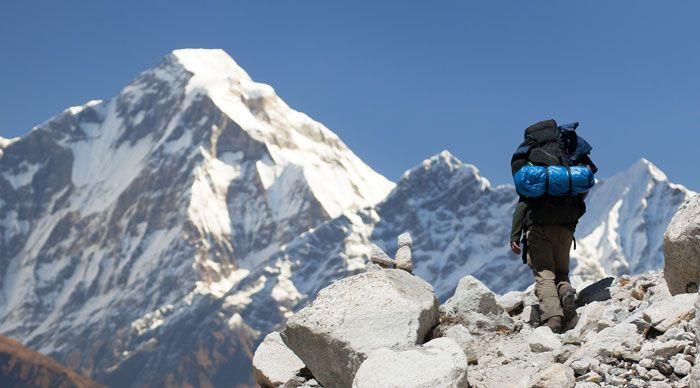 The Great Himalaya Trail is definitely a prime contender for the world’s best trekking route. At least, it is the longest and highest trekking route in the world. Spanning several hundred kilometres of amazing Himalayan terrain, this trail stretches over the full length of Nepal.

The trail itself passes through some of the most beautiful parts of the Himalayas – winding under the highest mountain peaks in the world. The nature and culture you’ll experience during the trek are simply spectacular. The incredibly remote villages and its inhabitants will make you wonder with awe just how resilient we humans are as a species.

The Great Himalaya Trail weaves its way among beautiful valleys, high-altitude plateaus and beautiful alpine terrain from Taplejung in eastern Nepal to Darchula in the far west of Nepal. It then continues through Tibet on either side and stretches as far as Myanmar in the east and Pakistan in the west. The GHT is not a single trek, but rather a consortium of treks of varying durations and difficulty. As many as 10 main treks – each of which is a pretty incredible trek on its own – can be clearly identified as parts of the GHT. Besides the main treks, you can also choose to undertake some cool side treks, which also vary greatly in terms of difficulty. So, you’ll have a range of different options when traversing the GHT.

There are two routes encompassing the Great Himalaya Trail: the high route and the low route. True to its name, the high route winds its way through 3,000 to 5,000 meter high terrain, with the Himalayan giants watching over as you trek your way through snowy paths with very few trees and villages along the way. The low route, on the other hand, though not as challenging as the high route is more culturally stimulating, as it passes through numerous Nepali villages and communities. However, you may not get as intimate views of the Himalayan peaks as you would on the high route. You can  of course, alternate between the high and low routes at various points during the full trek.

The Great Himalaya Trail will provide you with a truly unforgettable outdoor adventure of a lifetime.

The Great Himalaya Trail (GHT) has two routes – a GHT Low Route and a GHT High Route. Please below find the itinerary for both the high and low route. Please note, however, that the exact itinerary will depend on which company you select to take you on the world’s longest, hardest, and most extraordinary trekking trail in the world!

The high route of the GHT passes through the very heart of the Himalayas. Covering around 1,700 km from eastern to western Nepal you’ll be traversing spectacular high-altitude terrain and experiencing pristine Himalayan culture. It’s more difficult than the low route, but more rewarding as well.

Here are the regions you’ll pass through on the high route, ordered from East to West: 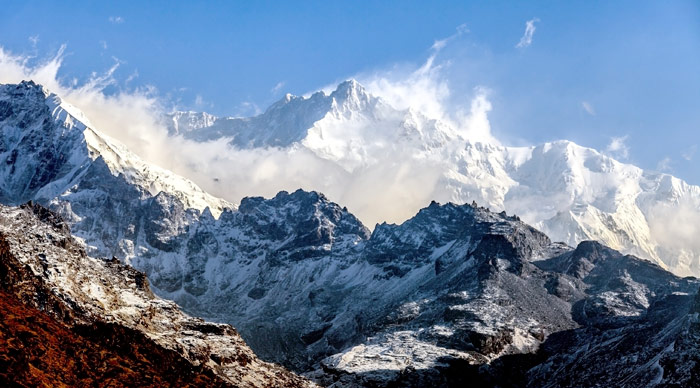 This trek will have you walking below Kanchenjunga (8,586 m), the third highest mountain peak in the world, standing at the eastern border between India and Nepal. A special highlight of the trek is the Pathibhara Temple, which is a remarkable pilgrimage site for Nepalese and Indians alike. After walking northwards, you reach Ghumsa, which then leads you through beautiful high alpine landscape to the Kanchenjunga Base Camp at 5,143 m. This trek then takes you through two high passes until you finally reach Taplejung, which is the starting point and the final destination of the Kanchenjunga section.

Trekking from the Kanchenjunga section of the GHT to the Makalu area, you’ll pass the challenging Lumbasumba pass at 5,159 m. This part of the GHT is quite difficult and certainly rewarding because of the remote landscape and the unrivalled Himalayan views. This Makalu Base Camp trek starts at Taplejung and ends at Tumlingtar.

This trek presents the most challenging part of the entire Great Himalaya Trail. Crossing three high passes – two of them over 6,000 m – you climb your way between Makalu and Everest. This is the highest altitude terrain you’ll have to traverse in the whole GHT. While the pristine nature around Makalu is a special highlight of the trek, one can’t forget the challenging “Three Cols” – Sherpani Col, West Col and Amphu Labsta – which you’ll have to cross to reach Lukla.

This amazing trek starts at Lukla, and includes not only the Everest Base Camp, but also the Cho La pass and the absolutely magnificent Gokyo Lakes along the trail. Although the route is quite crowded at the beginning, by the time you reach the Gokyo Lakes, you’ll hardly see any tourists at all. Having been thoroughly acquainted with this typical Himalayan terrain, you finally cross Tashi Labsta to reach Rolwaling. Weary from your Himalayan adventure, you finally rest at The Last Resort.

Beginning at The Last Resort/Borderlands, you’ll make your way along the Himalayan trails to reach the beautiful and Tibetan influenced Langtang region. On your way, you’ll pass the 5,308 m Tilman pass which is technically challenging and therefore requires mountain equipment. Having crossed the pass, you’ll be rewarded with spectacular views of the surrounding mountains and valleys. On clear days, you might even catch a glimpse of some Tibetan villages. The GHT Langtang trekking route finishes at Syabrubesi.

Walking along the slopes of Mt. Manaslu (8,163 m), this increasingly popular trek is not as crowded as the Annapurna Circuit or Everest Base Camp. Beginning at Gorkha Bazaar or Arghat Bazaar, you’ll pass exceptional alpine grasslands and small Buddhist villages. The beautiful village of Simagaon and the challenging Larke Pass (5,163 m) are special highlights of this trek.

The spectacular Annapurna Circuit is one of the most popular trekking routes in Nepal. The Annapurna Region alone has +110,000 trekkers a year (this includes several trekking routes). Though not challenging like the other treks, the Annapurna Circuit does provide an extremely close encounter with Himalayan terrain and extremely beautiful views of the surrounding mountains. What is more, you’ll always be within walking distance of comfortable lodges and tea houses! The trek along the GHT goes from Besisahar to Nayapul.

Upper Dolpa is one of the most culturally fascinating places in Nepal. It is an ancient repository of Tibetan traditions. There are also some Hindu villages. The people of Dolpa live in the highest villages in the world, with the Himalayan giants watching over them. To reach Dolpa, you’ll have to pass five passes over 5,000 m, while traversing beautiful Himalayan terrain. The GHT trekking route goes from Jomsom to Juphal.

This trek will have you walking in the barren yet beautiful terrain of Dolpa, passing Shey Gompa – the very heart of the Tibetan culture in Dolpa – until you finally reach the green forests surrounding Rara Lake. Shey Gompa is situated at the base of Crystal Mountain – a holy mountain visited by several hundred pilgrims every year. The trek begins at Juphal and ends at Rara Lake.

This is the final trek in the GHT high route that goes from Jumla to Simikot. During this trek, you’ll pass the amazing Rara Lake and walk along the ancient salt trading route to Humla. At Humla, you’ll get to experience unadulterated Himalayan culture. The terrain first contains green pastures, which then transform into barren land divided by magnificent valleys.

Humla is an ancient city, which was a trading route in the previous centuries, but has now become a pilgrimage spot. You’ll be trekking along the border of Nepal and China, and will cross the 4,620 m Nara La pass along the route. There are small Buddhist and Hindu villages in the area. Due to its remoteness, you’re not likely to find many tourists in Humla. The trek goes from Simikot to Hilsa.

While the high route is known for bringing you close to the Himalayan mountains, the low route of the GHT is considered the more cultural route because of the sheer number of villages and communities you’ll be passing on the way. However, this doesn’t mean that your natural experience will be tarnished in any way, because the low route contains spectacularly lush forests, vast pastures and beautiful rice terraces. You’ll also have to cross a couple of mountain passes on your journey. All in all, the GHT low route is more comfortable than the high route, and also has more exposure to Nepal’s unique culture.

Here are the regions you’ll pass through on the low route, ordered from East to West:

This region takes you around the slopes of Mt. Kanchenjunga, the third highest mountain peak in the world. From here, you’ll get some amazing views of the Kanchenjunga and Makalu Barun mountain peaks. Plus, you’ll also get to experience rural Nepal firsthand. This moderately difficult trek stretches from Tharpu to Taplejung.

This part of the  GHT Low Route is the exact reason it is called the Low Route. You’ll be walking in altitudes as low as 400 meters. From here, you’ll get great views of the nearby Kanchenjunga and Makalu peaks. It is a remote area that few tourists visit. As a result, you’ll get to experience pristine Nepali rural nature and life. This trek goes from Dobhan to Khadbari.

This region will have you crossing several 3,000 meter passes while enjoying majestic Himalayan views. Despite the excellent tourist facilities in the area it is not particularly crowded. It is therefore a very pleasant area to trek through.

Trekking from Jiri to Barabise. You’ll be leaving the well-trodden path into lodge-less territory and the reward will be remote landscape with lush forests and rarely visited villages.

This is the closest region to Kathmandu in the entire low route of the GHT. However, it is a fairly remote area without access to basic amenities. The people here are mostly sustenance farmers and cattle-herders. This region offers some incredible views of the Langtang range. It starts at Barabise and ends at Betrawati. Majestic Mt. Lirung dominates the mountain landscape.

Offering a great view of the nearby Manaslu and Ganesh peaks, this is a region in the lower route which is quite pleasant to trek. It involves an easy 4-to-9-day trek from Betrawati to Besisahar.

This is one of the best areas on the low route. Not only will you get a great view of the Annapurna range, you will also get to interact with the locals in the numerous villages that you’ll pass. This trek starts at Besisahar and ends at Beni.

This region will bring you close to nature as there are very few villages here. The landscape is barren and desolate. However, the views of the surrounding mountain peaks are quite spectacular. On your way to Juphal from Beni, you’ll pass through the Dhorpatan Wildlife Reserve – home to rare flora and fauna.

This is actually a side trek in the GHT low route. It wll take you through the excellent upper Dolpo region and culminates in the Phoksundo Lake. This area is especially notable for the ancient Tibetan culture.

This is one of the best areas in the low route. Trekking through difficult passes, barren landscape occasionally broken by small forests, you’ll reach the Rara Lake, the jewel of the region (Rara lake is known for its description as “a shimmering blue jewel set in a ring of snowy peaks”.

The low route of the GHT in the far west region borders India. This region has barren hills as well as lush wheat fields. There are several small villages in this area. You’ll be walking for 15 days from Rara Lake to Darchula.The trek is moderately difficult, and has a maximum altitude of 3,232 meters.

We hope both the Low and High route itineraries reveal that the The Great Himalaya Trail is a dream come true.

2 thoughts on “The Great Himalaya Trail”