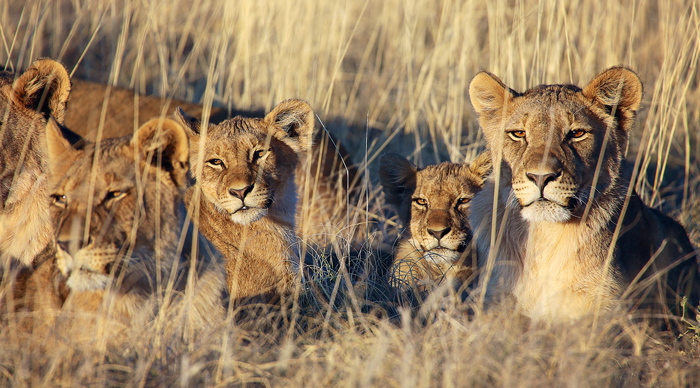 Africa is a unique continent in many aspects – geography, topology, landscape, people, culture and traditions. But, the one thing that sets Africa apart from any other continent is the abundance of wildlife here. Not only are there large numbers of animals and birds that call Africa their home, but they are completely wild and live in their own natural habitats –places they have called home for hundreds of thousands of years. This untamed wilderness combined with the sheer variety of flora and fauna make Africa a dream destination for any nature enthusiast.

When it comes to African wildlife there are quite a few plants and animals that are only found on this continent including giraffe, two-horned rhino, African elephant, wildebeest, and hundreds more. However, none conjure the feeling of Africa as much as the lions.

Lion populations: then and now

Lions have, historically, been an extremely successful species and about 10,000 years ago the lion was the most widespread large mammal after humans. They lived in all the continents of the world. However, all is not rosy when it comes to the lion population statistics in Africa today. Lions have lost over 75 percent of their former range and are extinct in 26 African countries. Most of the continent’s lions survive in just six countries – Kenya, Zambia, Tanzania, South Africa, Zimbabwe and Botswana. Lion populations have decreased more than 65 percent in the past 30 years and now number less than 32,000.

Tourism has played a significant role in the conservation of lions in Africa. They inject cash into tribal communities making them less reliant on hunting or poaching. International currency earned through tourism also helps nations and counties in their conservation efforts. So, going on an African lion safari is not only an exciting experience for the tourists, it also helps in the conservation and protection of this beautiful animal.

Lion, Panthera Leo, is a distinct species of the cat family and there are several sub-species of lions throughout Africa.

Other sub-species have relatively healthy populations and are protected by states and individuals alike. These are:

Thousands of people throng to African parks and reserves to embark on a genuine African lion safari. Many tour operators offer lion and big game safaris in Africa and they vary widely in price, options and amenities. So, you are bound to find a safari that’s just right for you whether you are on a budget and pressed for time or you have plenty to spend and have all the time in the world.

The safest way to see lions in the wild is to go on safari vehicles; but it is not the only way. Some African lion safari providers offer walking safari tours to see lions. Safari goers cling close to each other and approach lions on foot, but from a safe distance. You have to be extremely careful about the noise of your movements and need to follow the safari guide’s instructions to the letter. Although it sounds risky, and it certainly is, using common sense and following the instructions closely will ensure that you have an extremely exhilarating experience of witnessing lions from a close distance without the protection of a vehicle – from as close as 20 meters, but usually from around 50 meters from the lions.

It’s an unmatched experience to go on an African lion safari, witness a kill, see a pride feed and play together. Many wildlife enthusiasts describe it as one of the most captivating scenes in the wild. However, as precious as these views are, they are not hard to find. Africa has massive savannahs and incredibly huge plains where animals can be seen from miles away. African lions, for the most part, are a plains-dwelling species and one is almost guaranteed a sight when one embarks on an African lion safari provided by the many professional companies that operate throughout the region.

As an ending note, Bookmundi recommends you to check out The best safari destinations in Africa that includes some of the most exotic wildlife experiences that the continent has for its visitors.