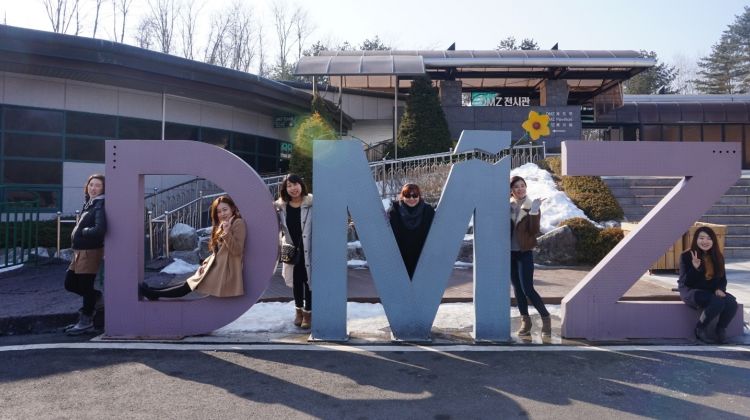 HIGHLIGHTS
DMZ
The military demarcation line was established according to the Armistice Agreement in 27 July 1953. DMZ is the place formed by the agreement that both parties should retreat 2km from the line.
Total 1,292 signboards of the Military Demarcation Line were established from Imjin riverside to the east coast. 696 signboards have been controlled by the U.N. Forces and the rest are under the control of North Korea and China. Contrary to the Armistice Agreement, both parties have not observed the principle that they should retreat 2km from the line.

Imjingak park
Imjingak park located at 50km northwest of Seoul was built for 5million people who lost home. Major facilities include North Hall where you can get a view of lifestyle of North Korea.

The 3rd Infiltration Tunnel
The third tunnel was discovered in October of 1978. 1.95 meters high, 2.1 meters wide and 1,635 meters long, it penetrates 435 meters south of the military demarcation line and ends at the Truce Village of Panmunjeom.

Dora-Observatory
From Dora Observatory, tourists can view the North Korean propaganda village in the DMZ and as far north as the city of Gaeseong.

Dorasan station
52 years of anticipation, waiting for the day when the two countries will be united once again. Dorasan station, the northernmost station in South Korea, has planned to connect the Gyongueisun(Line) and it will be linked to the European continent via the Siberian Railway.
View More
WHAT'S INCLUDED WHAT'S EXCLUDED
Why Book with Bookmundi
What are customers saying about Bookmundi
Excellent
4.71 Average 318 Reviews

Other Practical InformationPlease bring your passport on your tour day
NEED HELP OR HAVE A QUESTION ABOUT THIS TOUR?
If you have any question about this tour or need help with planning a trip, please do not hesitate to get in touch with us. We're ready to help.
Get help
hours 06 From US$ 40
CHECK AVAILABILITY
Response Time: 1 hour Response Rate: 100% MAKE AN ENQUIRY