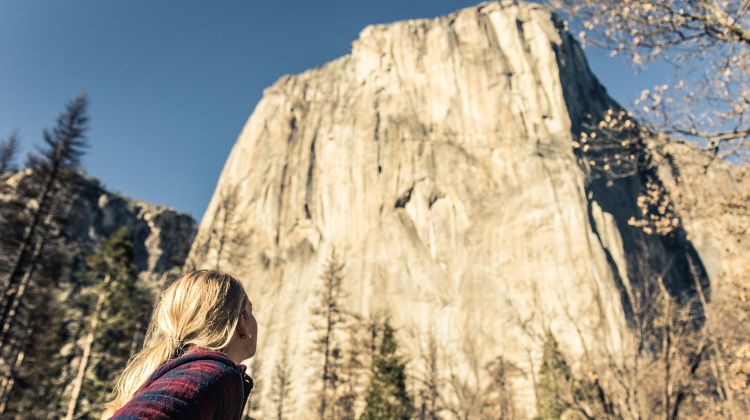 HIGHLIGHTS
Towering granite cliffs and Giant Sequoias headline this one-day Yosemite tour from San Francisco. Expert guides will make sure you don’t miss the history, geology, wildflowers and wildlife that have made this glacier-carved valley the jewel of America’s national park system.
Your Yosemite Giant Sequoia Tour from San Francisco begins with a pickup at your hotel, then heads east crossing through California’s fertile San Joaquin (aka Central) Valley and into the craggy Sierra Nevada mountains. Learn the colorful history of the region.
This is the only Yosemite Valley tour where you will also experience the solitude of the Tuolumne Grove of giant sequoias, the largest living things on the Earth. You’ll reconsider your place in the world—two-thousand-year-old trees can make people do that!
Your heart (and cameras) will be racing as you enter Yosemite Valley and enjoy stops at Inspiration Point and El Capitan Meadow. Take a moment at Half Dome, El Capitan, Yosemite Falls and, OMG, Bridalveil Falls. Then, take some selfies.
Yosemite is open year-round. Visiting during the winter months? Picture Yosemite Valley covered in soft white snow, with animal footprints scattered about in the meadows and snow-capped Half Dome casting its long shadow.
The tour maximizes your time in the park. Begin the return to San Francisco in the late afternoon, stopping for dinner (not included) on the way. Special requests? Help with photos? Just ask. Guests can enjoy this Yosemite and Giant Sequoia Tour 365 days a year. But no two tours are alike.
View More
WHAT'S INCLUDED WHAT'S EXCLUDED
Why Book with Bookmundi
What are customers saying about Bookmundi
Excellent
4.68 Average 345 Reviews

Other Practical InformationAccess to the Sequoia Grove can be difficult during winter months, generally October through April, and other activities may be substituted at the discretion of the guide. During winter months, temperatures in Yosemite can vary drastically to the ones in San Francisco. Therefore, it is recommend to wear winter clothes, especially shoes or boots with rubber soles and treads California law requires tour guests to bring a car safety seat for all children under 8 years and under 4' 9" (1.4 meters) in height. Any guest that does not provide their child's safety seat at the time of the tour and does not inform the tour operator may not be allowed to board the tour and will not be subject to refund. As tour sizes vary, transportation is in a 15passenger van or a 41passenger tour bus
TRAVELING WITH EXTRANOMICAL TOURS AND BOOKMUNDI

NEED HELP OR HAVE A QUESTION ABOUT THIS TOUR?
If you have any question about this tour or need help with planning a trip, please do not hesitate to get in touch with us. We're ready to help.
Get help
hours 14 From US$ 189
CHECK AVAILABILITY
Response Time: 3 hours Response Rate: 100% MAKE AN ENQUIRY