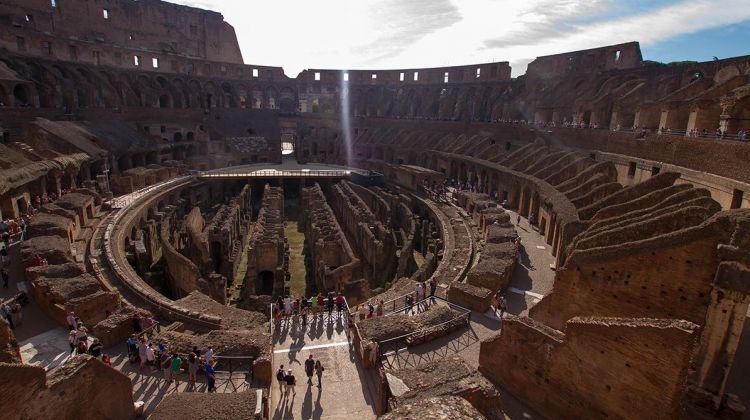 HIGHLIGHTS
Explore not just the Colosseum, but all the major sites of Ancient Rome on this small group tour; providing context, history and fascinating anecdotes to bring ruins to life.

We start by skipping the long lines at the Colosseum and diving right in to its bloody but politically-important history. As you wander its first and second tiers your expert, passionate guide will help you separate the facts from the fictions that are often fed to tourists. From the lives of gladiators, to the real hand signals that emperors used to condemn combatants, you’ll never get a more thorough and enjoyable lesson than this.

From the entertainments of Ancient Rome to the business, you’ll head to the Roman Forum to learn about the commercial and political heart of the empire. Along the way you’ll pass the titanic arch of Constantine, the final resting place of Julius Caesar, and the Temple of the Vestal Virgins, who were charged with the unenviable task of safeguarding the morality of Ancient Rome.

Finally you’ll ascend the Palatine Hill and learn the legend of Romulus & Remus, the mythological twin founders of Rome who were raised by a she-wolf. Explore ancient palaces, learning how the word “palace” actually originated right here, in the home of Caesar’s heir - the first emperor of Ancient Rome, Emperor Augustus. As you hear tales of the characters that played such a crucial role in shaping history; you’ll come to understand the importance this once-great empire like never before.

You will be a joining a group of no more than 15 people, gaining incredible access to your expert guide. There is no better way to immerse yourself in the legends and facts of Ancient Rome.
View More
CUSTOMER REVIEWS
5 - Excellent
Based on 45 reviews
Tour guide was wonderful
5 - Excellent
“Tiberius was an amazing guide. He was upbeat and fun with a great sense of humor. He was very knowledgeable and was extremely passionate.”
Awesome!
5 - Excellent
“Bruno was awesome, next time we're in Italy we would gladly book again.”
Excellent guide and tour
5 - Excellent
“She spoke very clearly and answered everyone's questions and filled every moment with interesting information about the area.”
10 out of 10!
5 - Excellent
“If I could give Bruno 10 stars I would. He was knowledgeable, invested, and considerate of the group members who needed to move at a slower pace. He even walked with us after the tour, answering questions about ancient Rome. Thank you for such an unforgettable experience.”
Read more reviews
WHAT'S INCLUDED WHAT'S EXCLUDED
Why Book with Bookmundi
What are customers saying about Bookmundi
Excellent
4.72 Average 290 Reviews

Late Arrivals & No Shows:
- No refunds or re-bookings can be provided for late arrivals or no shows after tour commencement or departure.

Other Practical Information> Gratuities to guides are appreciated but never obligatory. > Please note that the tour meeting time is 15 minutes prior to the start time. No refunds or re-bookings can be provided for late arrivals or no shows after tour commencement or departure. > Unfortunately we are unable to accommodate guests with mobility impairments, wheelchairs or strollers on this tour. > Please ensure that all members of your party have a valid ID on them on the day of the visit. > NOTE: There is a new rule at the Colosseum, Roman Forum and Palatine Hill that only small backpacks and regular-size handbags are allowed inside. Guests with larger bags will not be allowed to enter (there are no storage facilities) and all guests must now pass through a security check before entering the Colosseum. > The Colosseum has changed its admission policy to ensure that only 3,000 people are allowed within the amphitheater at any given time, meaning much less crowding during busy periods. Although our tickets are pre-booked with Skip the Line access, this may mean a slight delay on entering if capacity has already been reached. We expect that the instances of this will be limited but ask for your patience if you travel on a busy day and are affected by this unavoidable circumstance. In all, it should make for a much nicer experience for all (and longer general access lines!). > The Colosseum is subject to occasional closures. The Colosseum administration is usually aware of this and informs us the day before or of a given closure. Please provide us with detailed contact information in the event that we need to reach you to reschedule your tour. > Comfortable walking shoes recommended.
NEED HELP OR HAVE A QUESTION ABOUT THIS TOUR?
If you have any question about this tour or need help with planning a trip, please do not hesitate to get in touch with us. We're ready to help.
Ask a question
hours 03 From US$ 0
Sorry, this product is currently not available.
Response Time: 3 hours Response Rate: 100% MAKE AN ENQUIRY
Excellent 5 Based on 45 Reviews