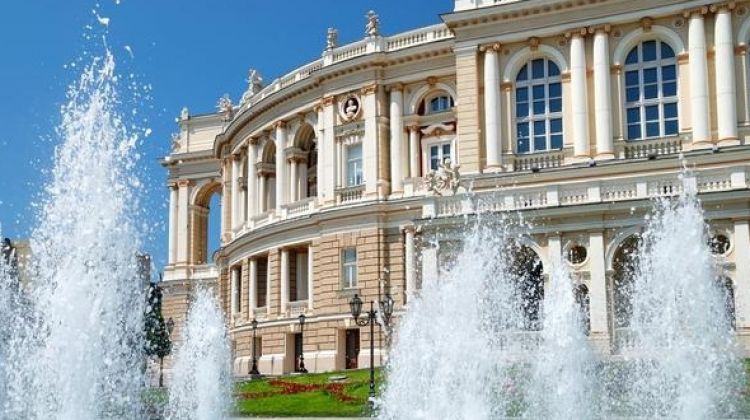 HIGHLIGHTS
Start your half-day tour of Odessa at Primorsky Boulevard where lots of the city’s most beautiful buidlings are to be found. See the Ekaterina Square with its restored monument to Queen Ekaterina II, and the legendary Potemkin Steps, entrance to the city from the sea.

Continue to the Gothic Shah’s Palace and admire the statue of a globe supported by 2 figures of Atlantis. Your next stop is a highlight of the tour; the beautiful Opera and Ballet Theater, designed by 2 Viennese architects in a French rococo style. Enjoy a 20-minute tour at the picturesque halls, galleries, and balconies, and marvel at the stage and fabled curtain.

Drive through the main streets of Odessa to Shevchenko Boulevard, named after a famous Ukrainian poet. During World War II, many parts of Odessa were damaged leading up to its liberation on 10 April 1944. Admire the monument on the square named for this historic date, and then go to French Boulevard to discover the only Champagne factory of the Russian Empire.

Pass the Filatov Institute of Eye Diseases and Tissue Therapy, one of the world's leading ophthalmology clinics, and continue to the prestigious University buildings en route to Shevchenko Park. Pay your respect at the Monument of the Unknown Sailor, before driving to the Pushkin Museum and Monument.

Next, visit the Transfiguration Cathedral, rebuilt in 2001 after it was demolished by the Soviets in 1936. Stop to purchase some souvenirs at the craft’s market, and then continue to the Odessa Philharmonic Society's Theatre and historical Krasnaya (Bristol) Hotel. We'll finish our excursion in the city centre or can take you to your hotel.
View More
WHAT'S INCLUDED WHAT'S EXCLUDED
Why Book with Bookmundi
What are customers saying about Bookmundi
Excellent
4.72 Average 304 Reviews

Other Practical InformationPlease note that a visit inside the Opera House is possible for groups of more than 6 people
NEED HELP OR HAVE A QUESTION ABOUT THIS TOUR?
If you have any question about this tour or need help with planning a trip, please do not hesitate to get in touch with us. We're ready to help.
Ask a question
hours 05 From US$ 45 See Group Discount
CHECK AVAILABILITY
Response Time: 2 hours Response Rate: 100% MAKE AN ENQUIRY