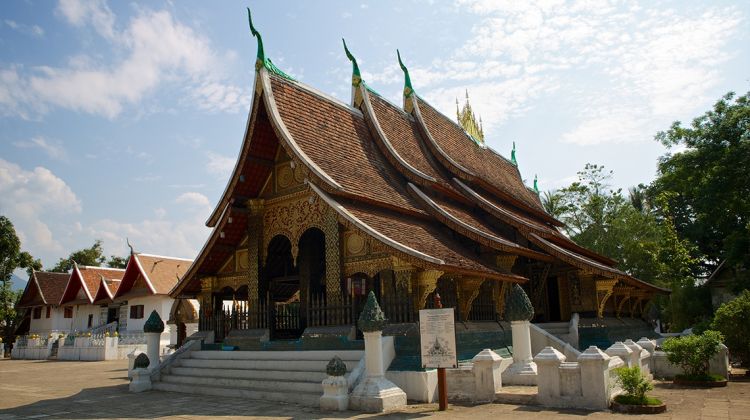 HIGHLIGHTS
This guided, group tour is for those interested in exploring Luang Prabang, an ancient city that was the royal capital of the country until 1975. Upon meeting your group members and tour guides at our sales office, your tour starts with a visit to the morning market, a lively street where locals shop for everything from colorful vegetables and exotic fruits to live frogs.

Next, step into the serene calm of one of the city’s most elaborate monasteries, Wat Mai, and then to the former king's palace, where you’ll discover the history and present life of Luang Prabang. From there, we will head to the ancient Wat Xieng Thong Temple, which features a spectacular low sweeping roof. This temple is Luang Prabang’s most distinctive and recognized monastery.

After lunch we'll visit either the Unexploded Ordnance Museum (UXO Museum) Visitor's Centre*, which documents the devastation that Laos suffered during the Second Indochina War, or peruse local crafts at Ock Pop Tok, which brings the fascinating world of traditional Lao handicrafts alive for guests. After that, we’ll explore the 16th century Wat Visoun Temple, known for its enormous stupa and its collection of old gilded Buddhas.

We'll finish the day visiting the Traditional Art and Ethnology Centre (TAEC)**, the only independent resource center in Laos dedicated to the country's many and diverse ethnic groups.

**The Traditional Arts and Ethnology Centre is closed on Monday.
View More
WHAT'S INCLUDED WHAT'S EXCLUDED
Why Book with Bookmundi
What are customers saying about Bookmundi
Excellent
4.68 Average 348 Reviews

Other Practical InformationComfortable footwear is advised. This tour includes visits to temples which requires travelers to dress modestly (all people need to cover their knees and shoulders of all people).
NEED HELP OR HAVE A QUESTION ABOUT THIS TOUR?
If you have any question about this tour or need help with planning a trip, please do not hesitate to get in touch with us. We're ready to help.
Get help
days 01 From US$ 90 See Group Discount
CHECK AVAILABILITY
Response Time: 1 hour Response Rate: 100% MAKE AN ENQUIRY