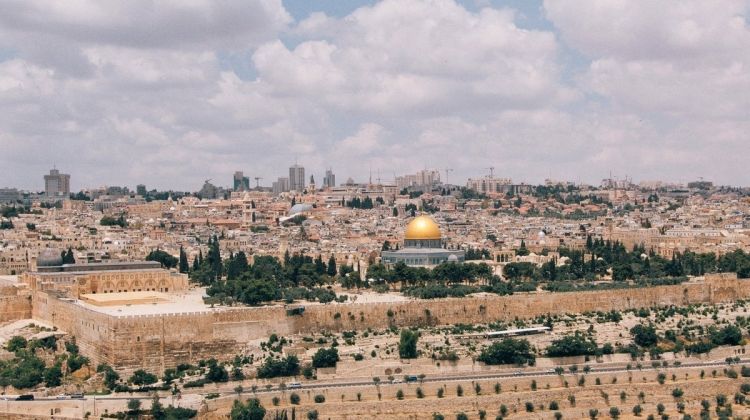 TOUR OVERVIEW
Start and end in Jerusalem, the trip Dead Sea Circuit is a guided bicycle tour that takes 14 days. You will be traveling through Shobak, Kibbutz Ketora, Wadi Musa and 7 other destinations in Israel and Jordan. Dead Sea Circuit is a small group trip which includes accommodation in hotels, meals and others. Please see the package includes section for further details.

Since biblical times Israel and Jordan have been alluring destinations, long attracting visitors. Carved out of the desert by prophets, kings, crusaders and pilgrims, the Holy Land offers many sacred splendours, but also diverse experiences and a rich tapestry of cultures. Bike from Israel to Jordan and back and delve into astounding ancient civilisations, historic relics, impressive religious sites and exquisite natural beauty.

From the ancient metropolis of Jerusalem, sacred to Jews, Muslims and Christians, we cycle down to the lowest elevation on Earth, where cycling below sea level, at -400 m, can be your new bragging rights! During our circumnavigation of the Dead Sea there will also be plenty of arid hills, silent deserts, fertile wadis, ancient fortifications and Red and Dead seas.

On the west of the Dead Sea, we cycle through inventive desert agriculture, evaporation pools, and reservoirs that irrigate the desert and stay at idealistic communities reclaiming and living on the land from the sand. Appreciate the wonders of the arid landscape as we push up the challenging Scorpion's Ascent and cycle through multi-coloured craters and rock formations.

Entering Jordan we take a water break on the Red Sea before being dried out in the sand dunes of Wadi Rum. Sleeping at a Bedouin camp brings the stars closer. Approaching the ancient Nabatean city of Petra by bike offers a unique perspective of this seven wonder of the world.

Before we depart Jordan, we have one last chance to experience the eerie stillness of the Dead Sea with a float in the salty waters. A ride in the Jordan Valley returns us to Israel, stopping in Jericho before our return to Jerusalem. Israel and Jordan will captivate you at every turn.

No additional cancellation fees apply for this Dead Sea Circuit tour. You can cancel the tour up to 45 days prior departure and avoid paying the full amount, but your deposit paid is non-refundable. No refund applies for cancellations within 44 days of departure.

For this Dead Sea Circuit tour getting the required visa(s) is the responsibility for each individual traveller, as visa requirements vary depending on your nationality. We recommend to check with your local embassies representing the countries that you are travelling to, as part of this itinerary.

Minimum Participants The minimum number of Participant for this trip is 4
NEED HELP OR HAVE A QUESTION ABOUT THIS TOUR?
If you have any question about this tour or need help with planning a trip, please do not hesitate to get in touch with us. We're ready to help.
Get help
days 14 From US$ 5,700
Unlock US$ 285 in extra savings CHECK AVAILABILITY
Response Time: 1 hour Response Rate: 100% MAKE AN ENQUIRY

Tour is operated by : SpiceRoads
1 Reviews
Currently 21:32 in Bangkok MAKE AN ENQUIRY Response Time: 1 hour Response Rate: 100%
Download Trip Notes Enter your email to get a PDF file containing all the trip information for the Dead Sea Circuit tour.
Trip Notes Sent
We have sent the trip notes for this tour to:

If you book the Dead Sea Circuit tour within the next 5 days, you can get by applying the following code: