Built in 1724, the first in a range of coastal defense to deter sea-borne aggressors and named after the Governor, its stable firing platform with 16 large cannons enabled gunners to bring accurate fire to bear on hostile ships from its perch as watchdog of the bay.

The Chavonnes Battery tells about the early History of Cape Town which includes:
• A Heritage site / museum,
• We host Contemporary International Art exhibitions,
• We offer guided tours of the museum,
• The official V&A Waterfront Historical Walking Tour,
• The exquisite site is suited to presentations and "Old Cape" themed dinners,
• The opportunity to fire an original 18th century Muzzle Loaded Cannon.

(Under supervision of the Cannon Association of SA)
It is the only place that you can touch the sand of the original Cape Town shoreline that has been buried for 300 years, the sand Jan Van Riebeeck walked on and all our guides dress in period costume of a 17th century VOC soldier.

The Chavonnes Battery is open 7 days a week from 9 am to 4 pm. The average walk through lasts 30-40 min with ample seating and reading material for longer visits.

Why book with Us

We offer:
• The spectacular layout and design of the Heritage Site/museum,
• Engaging with knowledgeable staff and tour guides from local communities,
• The thought provoking International Contemporary Art on exhibition,
• The comfortable seating and reading nooks, the hats and taking photos,
• Insightful Experience

Visitors are invited to don an 18th Century Tricorn Hat and step below sea-level for a fascinating and informative perspective of the 17th and 18th Century Cape Town. Graphic information boards in Afrikaans, English and Xhosa tells the story, displays show the results of the excavation work, including a well. Detailed models depict the battery in 1726, and a bird’s-eye view of Cape Town and Table Bay about 70 years later.

One of the most popular sections is the gunnery display, a mixture of genuine artifacts, careful replicas and some of the best models to be found anywhere in South Africa. We have the largest selection of Muzzle-Loaded Cannon in SA and one of the few sites where they are fired off.

Tours and Holidays by Chavonnes Battery 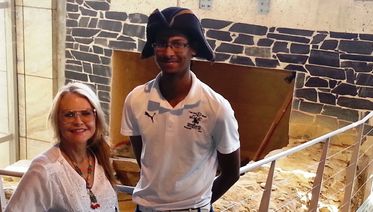